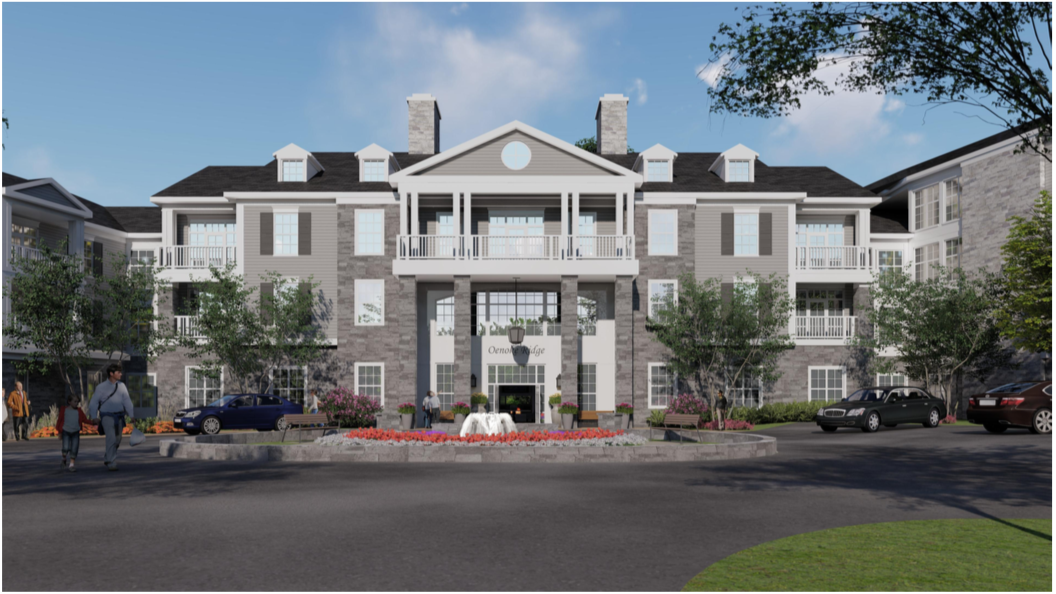 Town officials on Tuesday night called for those proposing a new residential retirement building on Oenoke Ridge Road to include details in making their formal application later this summer in areas such as building materials, colors, elevations, lighting, noise-generators, sustainability and renderings such as a 3-D computerized model that will provide a sense of scale.

Members of the Planning & Zoning Commission during their regular meeting also asked representatives for Waveny LifeCare Network to provide details on landscaping materials and retaining walls.

Commissioner John Kriz said he was concerned that “The Oenoke”—a 70-unit building of one- and two-bedroom apartments that residents would buy into as part of New Canaan’s “Continuing Care Retirement Community”—would loom over its neighbors and “cast a shadow,” and asked that Waveny “be sensitive” to the historic nature of the abutting New Canaan Historical Society property as well as the “well-attended” St. Mark’s Church on the northern side. Kriz asked that the architects use fieldstone “as opposed to something else,” for example, and avoid using aluminum siding.

“You are stuck between two very sensitive sites that are not going to go anywhere,” Kriz said during the nearly 4.5-hour hearing, held at Town Hall.

“We have worked hard to use architecture and the materials and the expression of the buildings that we find in this area,” Schmidt said, specifically citing plans for natural stone, horizontal clapboard siding, white trim, shutters and roof pitches.

Under the buy-in model that Barksdale described in introducing The Oenoke concept, residents would pay a lump sum of $750,000 or $850,000, depending on whether they’re seeking a one- or two-bedroom unit, in addition to an all-inclusive monthly fee of $4,500. The large payment would go into escrow and as residents’ healthcare needs change, they could draw down on the funds for medical services.

The Oenoke was designed following multiple focus groups with local seniors who weighed in the design of the building, including its apartments, entrance, elevations, colors, site plan, layout, land chosen, site plan and underground parking.

“Please see the project through their eyes,” Barksdale said. “It has been and will be hard to argue with their findings—what is important to them, what they need to age in place without leaving their hometown. This is not just an architectural exercise nor an engineering marvel. We did not design this project to maximize profits, reduce building costs nor provide any type of smoke and mirrors during our presentation. Our seniors require a residential character in nature, with no compromise, and fitting into our beautiful town.”

Commissioners asked whether the new building would be connected to The Inn (no, that’s an independent living rental facility, though some residents there receive home care), how Waveny would handle cognitive care for residents of The Oenoke (they’d use The Village on Farm Road), how motorists would approach and leave the site (the entrance would be through a driveway approaching the building on the left, with an entrance to underground parking all the way to the right), where service providers would enter (same area, and there’s a freight elevator up to the kitchen), how food vendors would work (the same trucks delivering to The Inn would be used for The Oenoke), whether the fire marshal has seen the plans and determined that emergency vehicle access is adequate (not yet), what the plans are for the parking areas off of the access road from Oenoke Ridge (the southern driveway into St. Mark’s is owned by Waveny and will be widened to accommodate two-way traffic, also most residents and employees at The Oenoke will park underground), how far along is the landscaping plan (the team that created The Oenoke is getting help from New Canaan-based Wesley Stout Associates), how large is the total property planned for The Oenoke, the vacant lot owned by Waveny and adjacent Historical Society parcel it’s seeking (about 1.5 acres), what’s the plan for noise-making mechanical equipment (there’s concealed lower level space), whether a location for emergency generators has been identified (not yet), whether the site has wetlands (not aware of any) and when Waveny would file its application (at the end of August so that P&Z could take it up in September).

Barksdale noted that Waveny does more than $4.5 million annually in uncompensated care “to ensure that local seniors have a place to come when they need it most.”

“We need to expand to be able to continually afford this level of care and uncompensated care for this area,” he said.

Schmidt said the apartments themselves are far more spacious than such CCRC units typically are. In addition to a theater and restaurant inside The Oenoke, it will include an indoor pool, spa and common areas, Waveny representatives said.

“It’s meant to be a very vibrant space for seniors, because they want to have a very active lifestyle,” Schmidt said.

It isn’t clear just what type of application Rucci will make to P&Z on Waveny’s behalf.

Asked by Commissioner Dan Radman what types of constraints the New Canaan Zoning Regulations, as written, present to a project such as The Oenoke, Rucci said that the existing adult housing provision would only allow three or four senior units on a parcel such as that on which The Oenoke is planned.

“So It just doesn’t work, it’s not designed for a senior housing project and if that is something that the town is interested in finding a place for—whether it’s this site or some other site—you would not be able to use the adult housing regulations,” he said.

Rucci noted that the type of housing that The Oenoke would provide is consistent with the goals of New Canaan’s guiding document for planning, the Plan of Conservation and Development.

Regarding the proposed location chosen by Waveny, he said, “I do like this site because it does seem to [have] relatively minimal impacts on residences.”

Waveny has a purchasing agreement in place with the New Canaan Historical, which owns a .88-acre property at 65 Oenoke Ridge Road that’s needed to complete the planned for The Oenoke, Barksdale said. The contract is pending P&Z approval.