Though professional studies have found otherwise, it isn’t clear that routing large vehicles through the “South of the Y” neighborhood for a planned construction project at the New Canaan YMCA is safer for residents, particularly children, than sending the vehicles directly off of South Avenue, town officials said Tuesday. 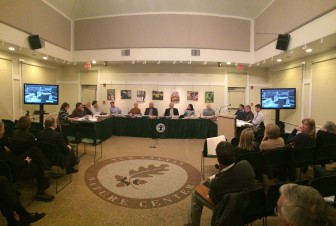 It’s too bad that the Board of Education voiced support for the “neighborhood” option, Planning and Zoning Commission member Dick Ward said at the group’s meeting in the Visitors Center at the New Canaan Nature Center. (The school board’s sign-off is needed for an alternate plan that would send vehicles down a narrow strip of land between the Y parking lot and Saxe Middle School playing fields.)

“I am disappointed that a decision was taken by the Board of Ed that a route on the northern side of the Y would be unwise or inappropriate for safety reasons that children tend to walk from the Saxe area to the Y and therefore would be in one way or another crossing the northern route,” P&Z member Dick Ward said. “However, I do point out that in my opinion a northern route could have fences on either side, a gate and a crossing guard to assure safe crossing of that route at any time that construction vehicles are accessing that route.”

The comments came during a discussion of the YMCA’s request for a special permit that would allow the facility to expand as part of a widely anticipated renovation. That renovation would include enlarging the two swimming pools by 14,000 square feet and expanding parking by 67 spaces.

Board members trod familiar ground during their discussion of the special permit request. Some raised concerns about sending large construction vehicles over the Tennessee Gas Pipeline (which runs underground by the Y). Others questioned whether the Y’s expansion ultimately would serve New Canaanites so much as nonresidents who use the popular South Avenue facility.

Addressing fellow P&Z members while about 15 residents looked on, most of them opposed to the routing of vehicles through their streets (including Surrey and Putnam Roads), Ward was among the most outspoken commissioners.

Advocates for a plan that would send construction vehicles down Surrey and Putnam Roads to the back of the Y, say it’s safer to have trucks go that way given how many kids walk from Saxe, across the school’s playing fields and then through the Y property to and from school (there’s no bus service for middle-schoolers living just South of the Y).

Ward noted that during the summer, none of the kids supposedly threatened in that trek are actually walking home from school, since there is no school.

“In fact, the kids are in the neighborhood and they’re the ones who are playing the streets or riding bicycles or whatever kids do, and the construction vehicles would be coming through the streets,” Ward said. “So from a safety point of view, I’m not convinced that the northern route is less safe. I think the unsafe route is perhaps through the neighborhood.”

The Board of Ed in February stopped short of taking an official vote, but did voice support for the option of sending the vehicles through the South of the Y neighborhood, rather than along the property divide between the Y and Saxe.

P&Z took no action on the request for the special permit.

One thought on “P&Z Member: ‘Disappointed’ in School Board on YMCA”