College-bound seniors from Norwalk and New Canaan High Schools have earned awards created to honor the memory of a recently deceased teacher and swim coach beloved by both communities.

Kelly Devine, Norwalk native and cherished New Canaan teacher, passed away unexpectedly after a brief illness in April 2016. She had graduated from Norwalk High School in 1997, where she was captain of the girls’ swim team and ranked fourth in her class. Kelly obtained her bachelor’s degree in English and education from the College of William and Mary. Always proud to be from Norwalk, she added a new element to her identity over the 13 years that followed: She became a teacher infinitely proud of her students and the work communities at Saxe Middle School and New Canaan High School.

Since Kelly’s passing, both New Canaan and Norwalk have honored Kelly and supported the Devine family beyond what they ever could have anticipated. Each year, the Norwalk and New Canaan swim teams unite to participate in the Kelly Devine Dual Meet. A permanent reminder of Kelly’s dedication to the students of New Canaan sits outside the doors of the high school—an engraved bench recognizing her love of literature and commitment to teaching. Kelly’s parents, Cathy and Jay, established a memorial scholarship at Norwalk High School, which New Canaan businesses, students and their families support through fundraisers and generous donations.

The annual awards recognize students who share Kelly’s passions: athletics, English literature and a desire to help others in their chosen career path. This year, the recipients’ activities and academic achievements tremendously parallel Kelly’s high school career. All three recipients are swimmers who consider English their speciality subject and have career ambitions centered around “paying it forward.”

“I didn’t think I was going to get it,” Morin told the NewCanaanite.com. “I was very excited because it means so much in the community of Norwalk and its connection with swimming,” Morin said. 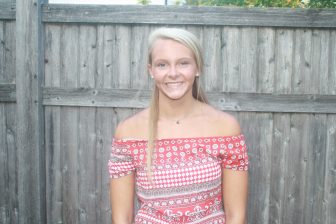 Morin, who will attend Susquehanna University this fall, has an extensive list of extracurriculars. She is a Chambers singer, Link Crew freshman mentor, National Honors Society member, and captain of the girls’ swim team. Sharing Kelly’s love of English, she also writes for the school newspaper, the Paw Print.

Morin plans to major in secondary education with a focus in English and special education.

Inspired by her former teachers and her mother, Morin plans to become a teacher and pass her love of learning on to others.

“I want to help other people learn. I loved my English teachers in high school, and I want other people to love school and their teachers, too,” Morin said.

Morin’s swim coach, Pamela Raila, says Morin has established herself as a team leader both in and out of the pool.

“Torie worked hard on each and every set, no matter what she was asked to do,” Raila said in an email. “On deck, she was one of the loudest cheerleaders for her teammates, encouraging them to swim their best.”

The Kelly Devine Awards were at New Canaan High School were presented last week at the annual senior recognition ceremony to Christina Gehnrich and Caroline Sweeney.

Gehnrich will matriculate to Miami University in Ohio this fall, where she plans to major in Psychology.

She has a self-described “huge passion” for English and creative writing. 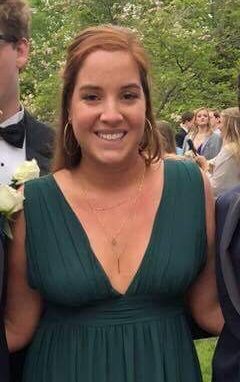 “I felt like my passion for reading and writing had not gone unnoticed,” Gehnrich said, in response to receiving the award.

In addition to her academic achievements, Gehnrich is part of Beads That Feed—a club that sells jewelry to raise money for the town’s food bank—and a four year member of the girls’ swim team. After surgery junior year, her involvement on the swim team changed. She continued her participation on the team by becoming the team’s manager and continuing to attend team practices, meets and dinners.

After college, Gehnrich aspires to use her Psychology degree to serve in a helping role for adolescents—a plan which is rooted in personal experience.

“When I was younger, my dad passed away. I felt like I needed someone to talk to,” Gehnrich said. “I want to be that person for others by working with adolescents and helping people with mental illness…because that’s played such a role in my life.”

Gehnrich and Sweeney belong to one of the last classes of students who remember Kelly’s impact on the school firsthand.

“I only met Kelly briefly once or twice,” Gehnrich said. “But from what I’ve heard and know to be true is that she’s an amazing person. I wouldn’t want an award with anyone else’s name on it.”

Although Gehnrich could not attend the ceremony because it conflicted with college orientation, her fellow recipient captured the emotion of the moment.

“When they called out our names together, I saw my mom out in the crowd crying,” Sweeney said.

Gehnrich and Sweeney more than just teammates and fellow recipients of the award—Sweeney describes the duo as “best friends since preschool.” 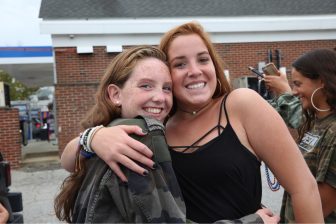 Sweeney, who will attend Bates College this fall, is also a four year member of the girls’ swim team. She participates in the “Best Buddies” club, and after taking a child development class, is qualified to work in the preschool at New Canaan High School.

Sweeney knew Kelly through the swimming community. Kelly would attend meets her brother was participating in, so the pair found themselves in the stands together.

“She would ask me, ‘Caroline, how are you? What’s new with swimming?’” Sweeney said. “And sometimes she would tell me, ‘It’s okay, keep your head up.’”

Like Kelly, Sweeney also intends to be a teacher.

“[Kelly] was a teacher and a swimmer who put time and effort into everything she did,” Sweeney said. “To be considered in the same realm as her is truly unbelievable and so special. I can’t put into words how thankful I am to have gotten this award.”

When NewCanaanite.com asked Sweeney what sparked her desire to become a teacher, she spoke to her personal experience. An eighth grade diagnosis of dyslexia and auditory processing disorder almost changed the path of her high school career. 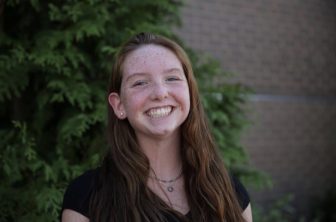 “I was diagnosed later from when other people find out,” Sweeney said. “I considered going to a boarding school that specializes in dyslexia, but I decided to stay in New Canaan.”

A decision-maker for eighth grade Sweeney was the girls’ swim team at the high school. After swimming for the New Canaan YMCA, Sweeney decided to stay in New Canaan to be a part of the swim team, knowing she would have to take reading classes to essentially “reteach [her] brain to do things that kids learn to do when they’re really young,” Sweeney described.

“There were definitely some challenges and tough moments,” Sweeney said, “but I’m so glad I went to New Canaan and went through with everything.”

Sweeney describes the swim team with almost the exact same phrases as Gehnrich, referring to the girls as “sisters” and “amazing people.”

“We are part of a family,” Sweeney said. “I know these people will see me at at 4 am practices, at my best and at my worst, but they are people I can always count on.”

Sweeney and Gehnrich’s high school swim coach, Kat Munson, says she has been “blessed” to know both girls since they were seven years old.

“They are two incredibly special humans, just like Kelly was,” Munson said.

Munson describes the duo as selflessly kind, approachable, and respected by their peers and teachers alike—most notably, for their ability to stand up for others.

“They are the champion of underdogs and lend their voices to those who feel silenced,” Munson said. “They operate from the heart, and their hearts are truly as big as full as Kelly’s. They are rays of sunshine to those who know them, and anyone who meets them. I couldn’t imagine better recipients of this prestigious award.”

[Note: The writer is the sister of Kelly Devine.]