Officials overseeing the restoration of the limestone fireplace in the Great Hall at Waveny House say the hearth itself may well be a historic piece that was brought in from Europe. 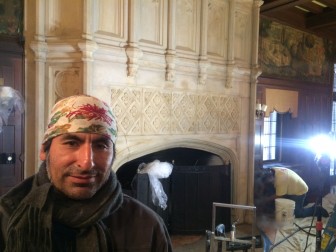 Johnny Hilares, director of restoration at Jersey City, N.J.-based Zakalak Restoration Arts, believes that the fireplace is antique but that the heads along the front of it likely were added later specifically for the house, said Rose Scott Long, president of the New Canaan Preservation Alliance.

“It’s very interesting, because they’re the same heads that we see in the vestibule [of the mansion],” Scott Long said Thursday as Zakalak workers worked away at the restoration and clean-up for which they were hired in January. 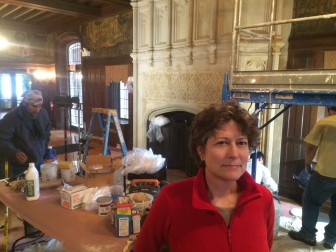 The project, funded by the nonprofit NCPA with monies raised at an event that marked the 100th birthday of Waveny House in 2012, is designed to help restore and preserve the cherished New Canaan structure and property in its original beauty, she said.

“It will bring this space back to the original intent, the original beauty, the original appearance and if we continue with the help of donations, we can do more surfaces, more materials, more unique elements in the building,” Scott Long said. 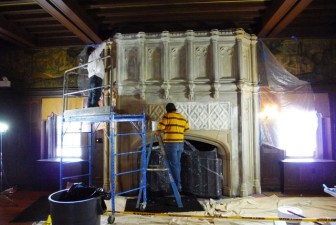 Restoring the fireplace has been a goal of the NCPA since it began last spring navigating town approvals for a separate effort—listing on the National Register of Historic Places. The town voted to support the listing in December, and the NCPA now is working with a committee to compile the application (which the nonprofit organization also is funding).

Hilares said he found the limestone fireplace in “good condition” though the stone itself is “very, very delicate and very easy to damage.” The process of restoration has involved using a synthetic rubber 3/16th inches thick that’s applied to the stone, let to dry and then pulled up to pick up dirt and stains. The Zakalak team also has undone and re-finished patches that had been made in the past, and steamed the fireplace at 300 degrees, rinsed and dried it out, after which a sealant will be applied, Hilares said. His firm specializes in conservation and restoration of historic architectural finishes.