Emad Aziz is out of hibernation and opens up the popular snack shack at 8 a.m. 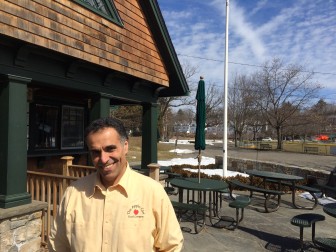 “My winter was spectacular, as always,” the Egypt native and New Canaan resident said on a recent morning as he prepared the kitchen for another season at Mead.

Asked what he does during the cold months, Aziz said: “I recover from the madness of the summer.”

“I am excited, looking forward to it,” he said of the working months ahead. “It’s going to be fun. Everybody cannot wait to get out of their homes from this winter. As soon as we open, we’ll get slammed right away.”

Aziz made NewCanaanite.com’s short list of the best breakfast sandwiches in town, and popular items include the falafel, buffalo chicken wrap and corn muffin. He operates concessions at Mead, Kiwanis and Waveny Pool. Town officials in February 2014 approved a 5-year lease with Apple Cart Food Co.

The landscape around the Mead Park Lodge building that Aziz is based in will see some changes this year. New Canaan Baseball will hang a windscreen around the outfield fence at the large baseball field and has offered to fund a full regrading of Mellick and Gamble little league fields, while the town plans playground upgrades.

A resident of the United States since 1981 and New Canaan since 1991, Aziz had been a professional Jai-alai player—a sport he learned on coming to the United States as a 17-year-old—prior to starting in food service. After landing in this country with zero English, he worked his way through Norwalk Community College, living in that city and then working for Overton’s and then at a dairy mart in Stamford before he answered an ad for Walter Stewart’s and found his way to New Canaan. Read more about Aziz in his “Faces of New Canaan” installment here.