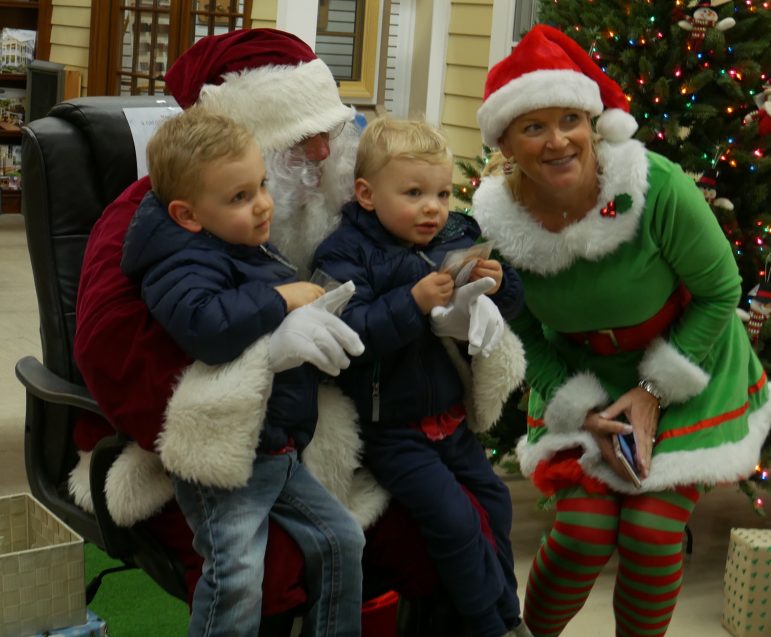 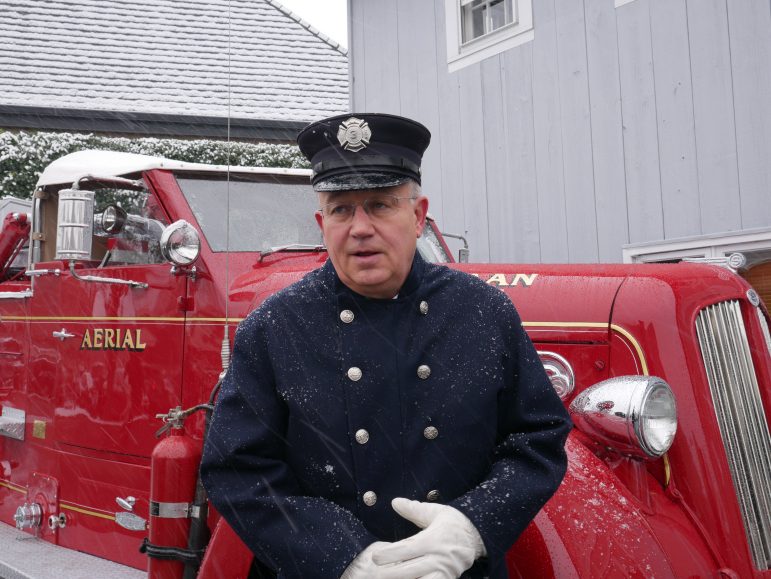 The New Canaan School of Rock band rocked out the event and got everyone in a holiday partying mood. Credit: Kim Barnard

Santa readies for a his next visitor during his annual visit to New Canaan this past Saturday, Dec. 9, at Weed & Duryea. Credit: Kim Barnard

Before Santa even arrived, a long line of children and adults had formed inside the bustling store. Credit: Kim Barnard

John Spilker, 6, said he did not mind at all that Santa had to come by firetruck instead of helicopter. Credit: Kim Barnard 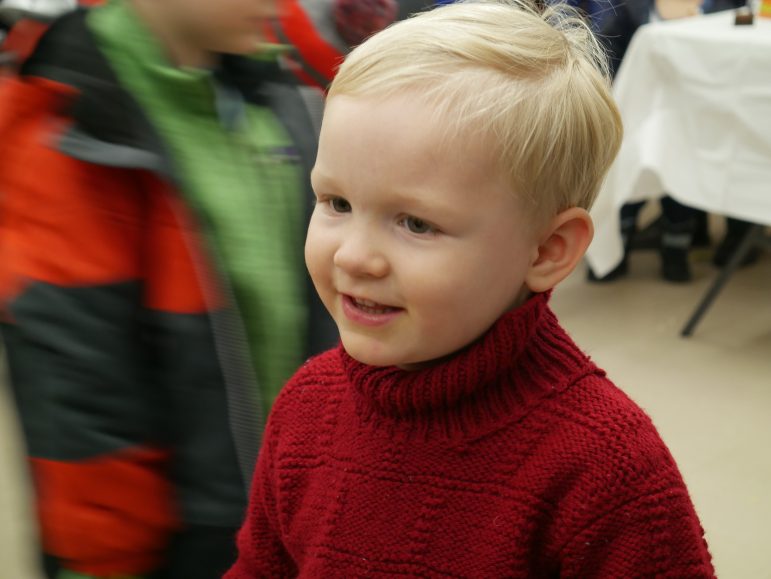 Grant Metz, 3, was thrilled to get a chance to tell Santa what he really wanted for Christmas. Credit: Kim Barnard

Children and adults hoping to see Santa Claus arrive in his personal helicopter at Mead Park on Saturday morning were instead greeted by New Canaan’s Tom Stadler, who was in the parking lot vigorously flapping his arms—not in an effort to fly himself, but rather to alert the incoming crowds that a snowstorm bearing down on the area had forced the Jolly Old Elf to cancel his flight.

Instead, Santa was arriving via land-based transportation, Stadler told drivers as they flooded into the bustling parking areas—more specifically, via a fire truck that was bringing him directly to hardware shop Weed & Duryea, sponsor of the annual event, as well as Gregg’s Garden Center.

After battling some slow-moving traffic during the 2,000-foot-long trek over to the hardware and general store, and then getting “trapped” in the store parking lot, everyone eventually made it safely to Weed & Duryea’s “Christmas Headquarters,” where local band, the New Canaan School of Rock, was cranking out “Spirit of Radio” by Rush to get everyone in the holiday mood.

Sure enough, the Bearded Man of the Hour arrived right on time, waving to his adoring fans from a beautifully restored 1949 ladder truck owned by former Assistant New Canaan Volunteer Fire Chief (and Santa’s personal chauffeur) Scott Ready (the truck had been in service in New Canaan until 1973). A long line of starry-eyed children (and their parents) had already formed as Santa took his “throne” in the Christmas shop, surrounded by colorful, sparkling holiday merchandise. Sweet smells of baked goods, hot chocolate and pine blended into a holiday perfume as the children waited patiently for their turn to tell the Man in Red their deepest desires.

Grant Metz, 3, said he was thrilled to have the opportunity to meet Santa and tell him what he really wanted for Christmas: “A giant Luigi stuffed animal.” Like most of the children at the event, Grant said he was not disappointed at all that Santa couldn’t fly in as had been planned. “It was fun to see him on the fire truck.”

Due to traffic delays in getting from Mead Park over to Weed & Duryea, and then parking, quite a few children did miss Santa’s actual arrival—but no one appeared too terribly upset. John Spilker, 6, said although he was kind of disappointed that he did not have a chance to see Santa arrive either by air or land, he was nonetheless thrilled to have the opportunity to meet old Saint Nicholas in person and tell him what he wanted for Christmas.

Nora McDonough, 7, was positively beaming after her brief visit with Mr. Kringle. “It was really fun because I got to take a picture and tell him what I wanted,” she said, he eyes lighting up as she spoke. “And he gave me a candy cane.”