Saying the addition of an electric car will improve their program and save money while helping the environment, officials with a New Canaan nonprofit organization that serves developmentally disabled people recently turned to a venerable local business for assistance.

STAR Inc., Lighting the Way received a state grant allowing it to add 10 new vehicles to its fleet, including one hybrid, one electric car and eight additional wheelchair-accessible vans, according to Peter Saverine, the organization’s director of philanthropy. Karl Chevrolet facilitated the purchase of an EV, in the spirit of the Elm Street dealership’s longtime support of local nonprofits.

“Karl Chevrolet was super nice and accommodating,” Saverine said. “They even drove over to Norwalk with three car models so we could take them for a spin and determine which was the best for us.” 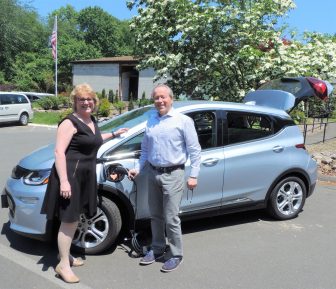 They ended up with one electric Chevy Bolt EV that will help the organization experiment with leveraging their savings to reduce costs.

The new vehicle will join a fleet of more than 55 that transport STAR clients in Fairfield County for purposes that include jobs, activities, doctors appointments and library visits, Saverine said.

“With today’s energy prices it was an inefficient mode of travel to take just one person in a seven- or 13-passenger van with typically 14 to 18 miles per gallon,” Saverine said. “This more energy-efficient approach will save our organization thousands of dollars while benefiting the environment.”

For Karl Chevrolet President Leo Karl III, the decision to step in and help was easy.

“We’ve always tried to support these businesses with extra-special deals on vehicles and contributing toward the cost when we can,” Karl said. “We try to make the process streamlined and smooth.”

Seeing more electric cars on the road has been more than just good business for Karl, a noted proponent of eco-friendly vehicles who is responsible for getting electric charging stations to New Canaan.

“The industry is still in its infant stages, but we’re seeing a fairly significant percentage of them go up on the roads,” Karl said.

The $374,000 grant for the new vehicles is one part of more than $1 million that STAR has received in state grants from Gov. Dannel Malloy’s programs, ranging from handicap accessible furniture lockers to new HVAC systems.

“Each year we apply for grants for various projects,” Saverine said. “We never expected that we would get all of our requests filled. We are very pleased.”

STAR’s new Bolt, driving 15,000 miles a year, has an estimated cost of $540 in upkeep, Saverine said. When compared to a standard gas minivan, the same mileage would cost $2,250 plus maintenance, he said.

“If we could replace or add to our fleet so we get to a point where 30 or 50 percent of it is an electric or hybrid vehicle, we can experience dramatic cost savings in the long run,” Saverine said.

The biggest hurdle that Saverine expects to face is simply “getting used to plugging it in.” One of STAR’s Norwalk group homes has already installed a special charging station in its garage so that drivers have easy access.

To STAR, being environmentally conscious is an integral part of their company’s agenda.

“We’d rather be ahead of the curve than catching up,” Saverine said. “If we can be an example to other nonprofits on the fence of switching to electric, I think that would be great.”

Karl noted that all of the energy used by electric vehicles is developed in the United States so there is no need to rely on imported products. That energy can be harnessed through various means—in New Canaan, for example, Karl Chevrolet has solar paneling on its roof that makes about 30 percent of the energy utilized for their vehicles.