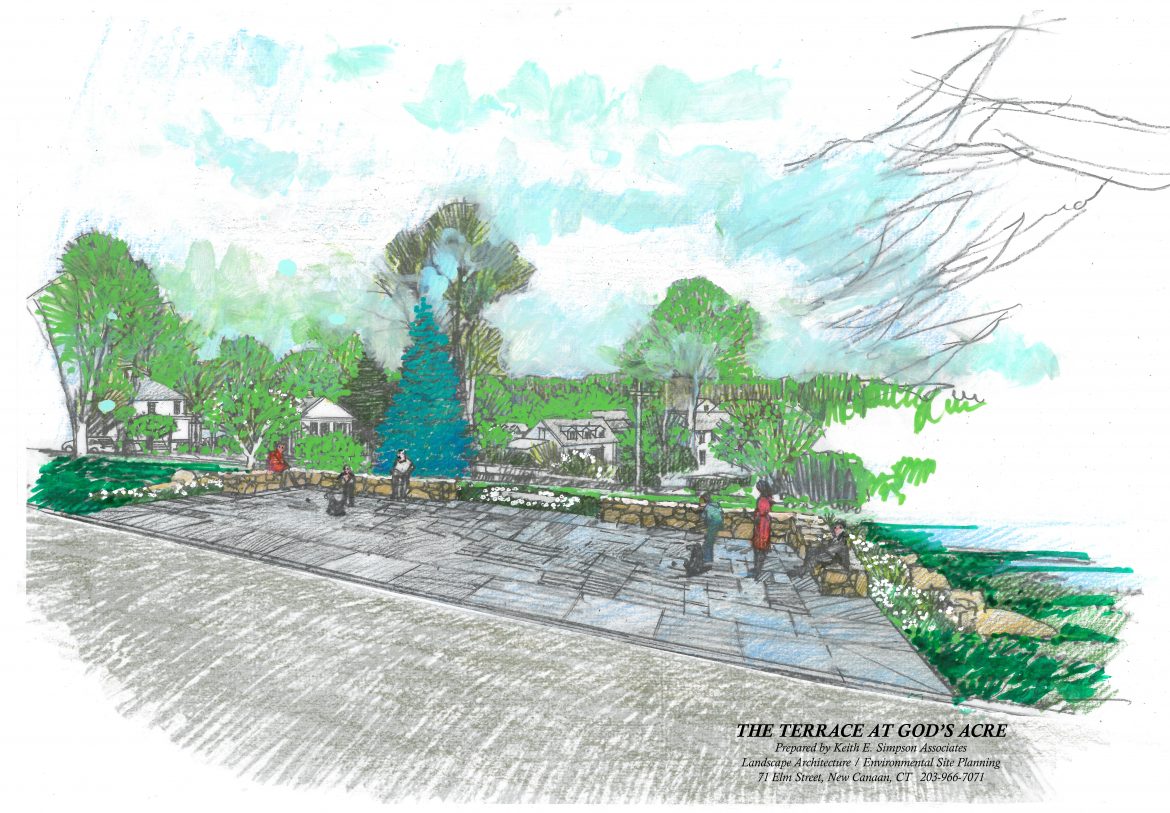 Rendering of what was to be the Founders Terrace at God's Acre. Specs by Keith Simpson Associates

A plan dating back to last year to build a permanent flagstone terrace atop God’s Acre has stalled due to a land ownership dispute between the town and church adjacent to the proposed site, officials say. 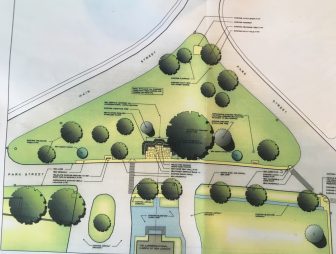 According a document drafted by the committee behind the proposed “Founder’s Terrace,” an “ownership issue” regarding God’s Acre itself surfaced this summer between the town and Congregational Church of New Canaan.

“We have been notified by church leadership that they will now seek to block construction of the terrace,” according to the volunteer committee’s draft document, obtained by NewCanaanite.com.

To be funded entirely by private donations, the committee’s goal was to raise $100,000—half of that to pay for construction and the balance for future upkeep. The committee was more than halfway toward its goal. The project is now paused, the document said. 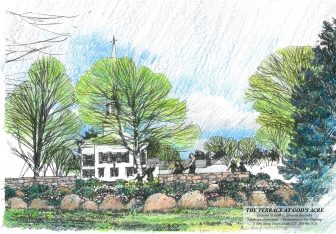 “This was not the outcome any of us expected, but it seems the most prudent step in the face of land ownership issues that are beyond our control,” the document said.

One of the community’s most beloved annual traditions, Christmas Eve caroling at God’s Acre dates back 1916 and was started by the league Civic League, according to the historical record.

It can continue despite the terrace plan being paused, officials said.

The committee indicated in the document that the church had initially supported the project, then changed its mind, saying land ownership claims emerged as “an unexpected turn of events.”

It wasn’t immediately clear whether the land ownership dispute involves all of God’s Acre or just that part at the top where the terrace is planned (directly opposite Park Street from the church’s front door), whether church officials believe the terrace would be built over a burial ground (see below) or what legal arguments each side is making with respect to the property.

The Rev. Dr. Stephen Chapin Garner, senior minister at the Congregational Church, could not be reached for comment. First Selectman Kevin Moynihan was not immediately available to comment.

A citizen-led effort to create the terrace launched in early-2019, when the committee formed to create a year-round gathering space at the top of God’s Acre where the Town Band also could set up each Dec. 24. The committee said at the time that caroling could be in jeopardy because the Hersam family, which for years had given money to support the bandstand’s assembly, pulled out after selling its weekly newspaper to Hearst Corporation.

The approximately 18-by-36-foot patio was to be include walls wide enough to sit on, a retaining wall lined with boulders and plantings and granite plaque with an inscription noting the important location of God’s Acre. (The town itself was founded around the Congregational Church, which was established in its current location several decades before New Canaan’s incorporation in 1801—the church’s website URL is godsacre.org.)

Those plans are on “pause,” the committee said in the draft document, “until such time as land ownership is resolved.”

The town appears to have been conducting legal research into the ownership of God’s Acre for some time. A July invoice from the town attorney referred to a half-hour of work for “research and review” connected to the “God’s Acre Platform,” as well as a .9-hour “Zoom call with First Selectman re: God’s Acre,” according to a copy of the bill, obtained through a public records request. In all, the matter had cost more than $1,100 in legal fees through July, the invoice said.

According to local history, God’s Acre served as a burial ground for the early founders of the town.

Murphy had said during public hearings on the project that a sonar study of the area showed that nothing is located below-ground where the terrace was to go. And in gaining municipal approvals last year, members of the committee assured town officials that they had consulted leaders from the church, among other groups, on their plans.

The committee formally introduced plans for the terrace in March 2019, appearing before the Historic District Commission. The Board of Finance and Town Council each approved the project unanimously in September 2019. According to its online donation page, 93 donors have given about $55,000 toward the flagstone terrace.

[Editor’s Note: Some references to the committee’s draft document have been removed following an email exchange with a member of the volunteer group.]