It sounds like a question on a kid’s quiz show: “How do you stop a train?” A) Hail it like a cab? B) Pull the emergency brake? C) Put wet leaves on the track?

If you chose “C”, you were correct … and you must be a regular commuter on Metro-North.

This is the time of year that tries train engineers’ souls and commuters’ patience. On a single day one recent fall, 60 rush-hour trains were delayed by “slippery rails” when wet leaves caused trains to “slip-slide” on their usually solid tracks. 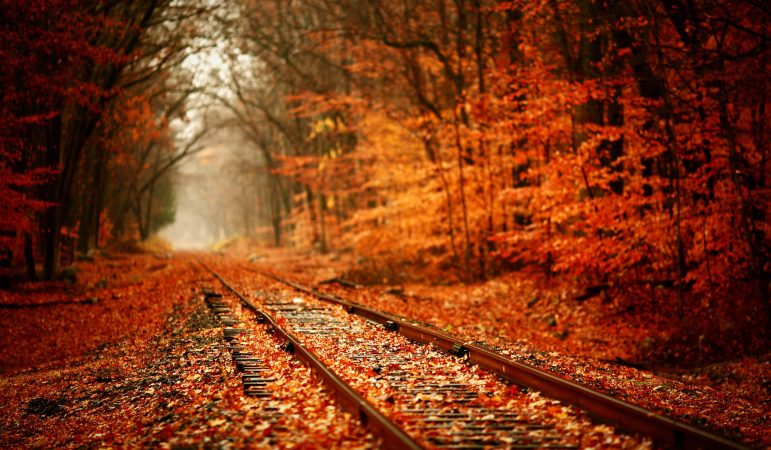 Lovely to look at, dangerous to ride on.

You may not realize it, but the flanged wheel of a train contacts the rail only on a surface area the size of a dime. That’s why trains can move so smoothly with minimal power… riding a small, but firm area of friction.

But when the leaves fall and get wet, they are ground into one of the slipperiest substances known to man, a compound called pectin. As the train rolls along, its braking computer senses the slip and tries to apply the disc brakes, just like your cars ABS system.

But often the brakes are applied so hard that a locked wheel is ground against the track, creating a flat spot on the usually round surface. In years past these flat wheel issues have taken 25% of cars out of service for regrinding. 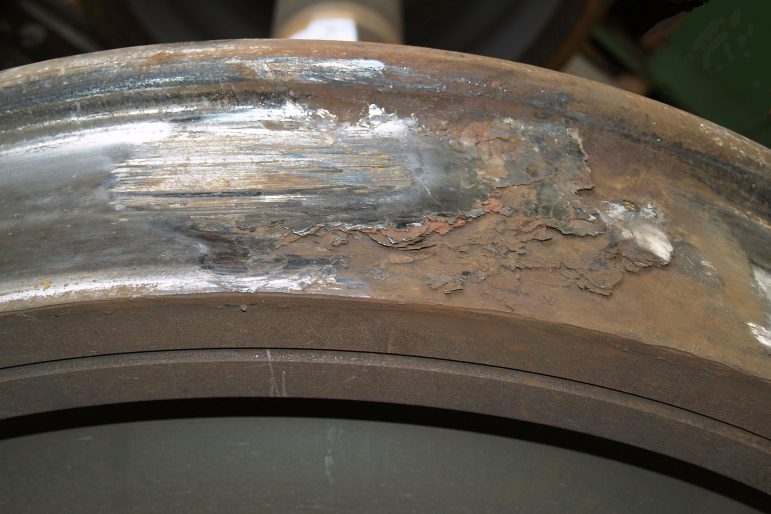 Flat spot on a train wheel

Sophisticated train computers don’t like it when they think the train can’t stop so, on the new M8 cars running, the railroad had to reprogram the safety systems to reassure them the train wasn’t out of control and didn’t need emergency braking.

Worse yet, on some lines the slippery leaves can virtually leave the trains unable to move. Case in point, the Danbury branch line which is an almost continual up-hill climb from Norwalk to “The Hat City,” 397 feet above sea level.

On this branch, diesel locomotive-pulled trains often can’t stop on hills at stations like Cannondale, so on some days they skip such stops and make a running start for the steeper climbs.

On an MU (multiple-unit electric) mainline train, all cars are locomotives, spreading out the traction-power the full length of the train. But on a branch line, a single Genesis locomotive weighing 120+ tons has only eight wheels touching the track, seeking enough traction to pull a fully loaded eight car train. That means eight dime-sized points of friction for a multi-ton load.

Sometimes the solution is as simple as sand dropped from special hoppers on the train just in front of the drive-wheels. The resulting friction gets the train going or helps it stop. 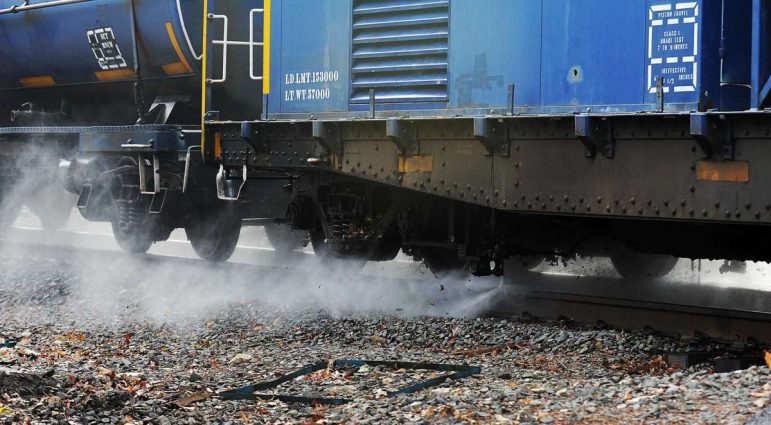 Water World is specially equipped with high pressure hoses that blast the tracks free of the gooey mess.

Mind you, this is a problem for railroads worldwide, not just here in the northeast. Of late, Metro-North has brought in heavier armament… a specially designed car dubbed “Water World” equipped with high pressure hoses that blast the tracks free of the gooey mess.

They’re also experimenting with chemical sprays. And one inventor in the UK is even proposing to zap the goo off the rails with lasers!

Jim Cameron, a Darien resident for more than 25 years, is the founder of the Commuter Action Group, sits on the Merritt Parkway Conservancy board, serves on the Darien RTM and is program director for Darien TV79. Opinions expressed in this syndicated column are his own, not necessarily those of Darienite.com, but, c’mon, you knew that. You can reach him at CommuterActionGroup@gmail.com.