New Canaan High School junior Mike Cognetta, 16—a varsity lacrosse, wrestling and football (safety) athlete—says his experience of the annual Prep Rally at Dunning Field has been that it’s a mutually supportive, bonding experience for students and teachers alike. 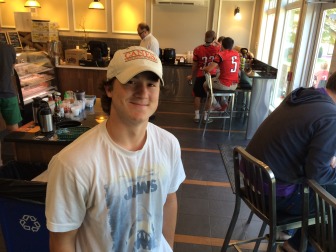 NCHS junior Mike Cognetta is among those who signed a petition respectfully requesting the district to green-light the traditional Pep Rally next week. Credit: Michael Dinan

“It really holds us up and brings us together more when we’re supporting one thing—our pride for the school—it just feels good,” Cognetta said Friday afternoon from inside CT Sandwich Co. on Pine Street, a popular spot.

The teen’s signature is one of more than 600 on a petition to restore the Pep Rally, which he said has been cancelled by the district after one student came to last year’s event inebriated. The Pep Rally typically is held on the Friday evening of Spirit Week, leading into New Canaan High School Homecoming Weekend, which is next weekend.

“It’s just the actions of one student and I feel that cancelling [the Pep Rally] is over the top and unnecessary,” Cognetta said. “It’s not like everybody was doing that [drinking]. Everybody wants to have it and it’s a great time, lots of fun.”

The petition had 641 signatures as of Friday afternoon, just a few hours before the varsity football team’s home opener at Dunning.

Reached by NewCanaanite.com, NCHS Acting Principal Dr. Veronica LeDuc said that the decision to cancel the Pep Rally is based on safety concerns for students, among other considerations. LeDuc said that the event itself had become something that had nothing to do with school spirit and administrators called for students to help reshape the Pep Rally to something more appropriate, which they chose not to do.

“We have had some significant issues associated with pep rallies for several years, and the way our pep rallies ran is that each fall sport team would perform a dance that they created and they would put that on in front of the student body,” LeDuc said.

“We had it in gymnasium and we finally moved it to the stadium but the behavior of the dances themselves became less and less of the quality that people should be exposed to. They got a little bit too graphic in the way they behaved. So that was an issue and that has developed over time.”

Discussions about eliminating the Pep Rally surfaced two years ago, but the kids begged to have it continue, LeDuc said.

“The other situation that has accompanied the pep rally in the past is that we have had some students who have gotten involved with the use of alcohol on that day and we have had several incidents over the last four years that student have had to be admitted to the hospital because of their use of alcohol,” she said. “So we as an administrative team—the athletic director and the Student Council advisor—met with the kids last spring and explained to them the dilemma with the Pep Rally and that we would like to make some changes in way it occurred and student body leaders—this involved the captains of the teams and the student government kids—they should think about what can we do to improve the situation, and make it so that it was a positive contribution to Homecoming Week. And we didn’t get any suggestions other than to do what we traditionally have done.”

As educators, LeDuc said, the group felt it couldn’t put kids in an unhealthy and unsafe situation, “whether it’s a small number of kids or not, that they should use this day to behave in ways that are unsafe.”

“And not only are they unsafe to the kids who may be using alcohol themselves but if they are out on the roads then they are unsafe for a larger number of people,” she said. “So it was a decision made based on safety and best interests of the student body community.”

The petition calls for the reinstatement of the Pep Rally, acknowledging that it hasn’t been earned, based on last year.

“The pep rally has been a tradition in the past to which we have clearly not earned this year,” part of the petition says. “We are respectful of the thought process behind the decision to eliminate it, however, we are willing to prove ourselves as mature and respectful students and earn our rights back to have one this year. The tradition of the pep rally has been one of many traditions at New Canaan High School in which students, teachers, and coaches take pride in participating in. It not only brings our school together, but when executed correctly, it can truly demonstrate positive messages and have positive influences.”

LeDuc said the school will still have its traditional days for Spirit Week: Color for a Cause (where classes dress up in a color associated with a charitable organization and fundraise), Costume Day (where kids dress up in famous and original costumes), Decade Day (where each grade is assigned a different decade to), Black and Red Day, the Friday night bonfire, Homecoming football game and dance.

“The Pep Rally was a very small item in a very busy week with lots of fun things for kids to do,” she said. “But it was a situation where we felt we could not maintain a safe environment for the kids and they weren’t using it in a way to build school spirit. They were maybe placing themselves in situations they couldn’t handle well.”

LeDuc said kids knew on the second or third day of school this year that the Pep Rally had been eliminated, and information came to groups including team captains, parents and student government leaders.

“What I hope students will understand is that when they voice their opinions, and perhaps we disagree, it isn’t that we don’t value their opinions, it’s because we are responsible for making certain decisions,” she said. “I wouldn’t want them to think that just because we didn’t agree with them and do what they asked us to do that we didn’t value what they had to say.”