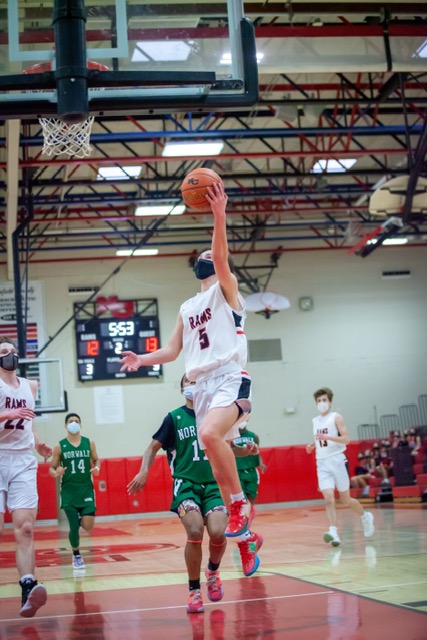 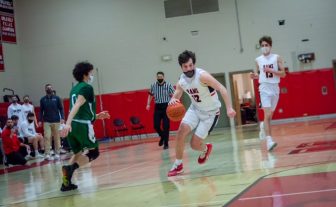 The No. 5 Rams knocked off 12th-seeded Norwalk 41-33 Tuesday night in the First Round of the FCIAC playoffs. New Canaan advanced to Friday’s Quarterfinals where they will meet No. 4 Wilton, a team that handed the Rams two of its three losses this season.

For the Rams (10-3) it was the second win over Norwalk (4-9) in a little more than a week. As it was the first time these two teams played, it wasn’t exactly a textbook victory. New Canaan—playing for a fourth consecutive game without senior co-captain Leo Magnus—struggled offensively at times from both long and close range. 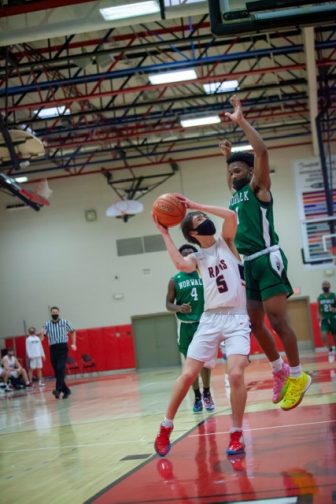 Jack Hladick (#5) was the high scorer for the Rams with 11 points. Credit: Mike Wilson

“Survive and advance,” New Canaan head coach Danny Melzer said. “It wasn’t pretty. I thought we had a ton of good looks early on and even late in the game. I just thought we didn’t shoot the ball particularly well. It wasn’t the prettiest win but in the playoffs, it doesn’t matter. All that matters is winning.”

The Rams more than compensated for its streaky shooting with another signature consistent defensive performance. New Canaan trailed Norwalk 13-10 with 6:44 left in the half when they started turning up the defensive intensity and found their range on the offensive end. The Rams went on a 13-2 run to finish out the half, thanks largely to the performance of Jack Hladick.

With Magnus and senior Steven Panzano out, the New Canaan sophomore was pressed into starter service for just the second time all season. Melzer had a hunch Hladick could provide some much-needed offense. 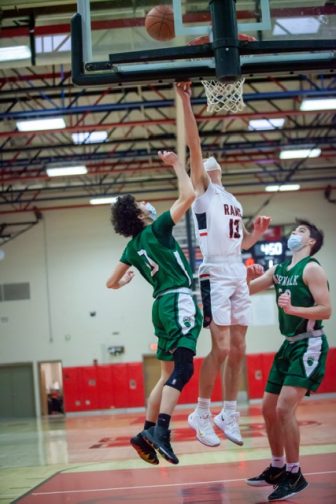 As he has been more often than not in his five-year tenure as head coach, Melzer was right.

Hladick scored nine of his team-high 11 points in the first half to help New Canaan take a lead it would not relinquish.

“Jack started and played really well earlier this year against Danbury and made the most of his minutes,” Melzer said. “We wanted to give him an opportunity and see if he could give us a little spark, and he gave us one. I’m proud of him for stepping up and giving us what we needed.”

Senior co-captain Will Bozzella scored 10 points and had 8 rebounds. Sophomore Blake Wilson had 7 points and 5 boards and senior Denis Mulcahy chipped in with 7 points and 6 rebounds. 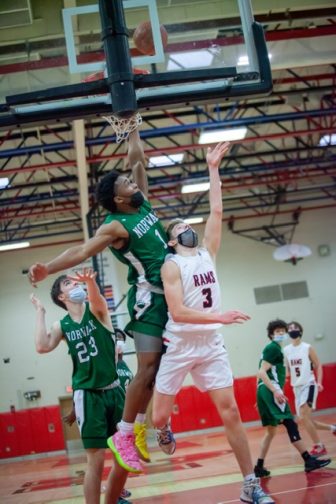 Wilson hit a clutch layup off a great pass from Hladick one minute later. Aafter a Norwalk turnover, Bozzella was fouled with :52 seconds on the clock and hit both free throws to ice the game.

The significance of the win occurring on the same date as the last landmark New Canaan victory was not lost on senior co-captain Christian Sweeney, the last starter left from that 2018-2019 CIAC Championship team.

“Who knew two years ago that this program would be consistently winning like we have been,” Sweeney said. “This win is huge and shows how far we have come and hopefully we get the same result and get a championship win in the finals.”