Traffic officials are weighing a new request to install signage on Heritage Hill Road from a resident who has difficulty pulling out of a shared driveway there. 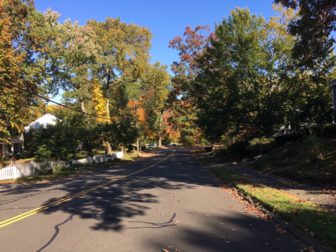 Residents at 179 Heritage Hill Road have requested signage to alert motorists to their hidden driveway. It’s on the right as you travel down (east) toward Forest Street in this photo. Credit: Michael Dinan

Motorists are traveling faster than ever before on the road—a popular cut-through between Main Street and Route 123—and they pick up speed coming out of a downhill curve approaching Forest Street, according to Juliana McKenna of 175 Heritage Hill Road.

“When you come down the hill on your way down toward 123 everybody is going really fast and I guess they pick up speed on the straightaway and then they come around the corner, so when I am coming into my driveway, because when I put my right light blinker on, everybody thinks I’m taking a right onto Forest,” McKenna told members of the Traffic Calming Work Group at their most recent meeting.

“So I have to put my emergency lights on to try to get them not to hit me so that I can pull into the driveway and one of our residents, four or five years ago was coming out and got T-boned, and she requested the sign then and was declined,” McKenna said at the group’s meeting, held Oct. 18 in the New Canaan Police Department. “I was thinking even a road bump that would make people stop before they go on down the hill. But nobody thinks you are pulling into our driveway, they all think that your right blinker is for Forest Street.”

Though as an emergency vehicle route no speed bumps or other similar traffic-calming measures could be installed on Heritage Hill Road, according to Department of Public Works Assistant Director Tiger Mann, officials agreed to request permission to install a ‘Hidden Driveway’ sign 100 to 200 feet west of the shared driveway.

The town’s traffic authority, the Police Commission, must approve the measure.

Mann said that speeds clocked on Heritage Hill Road recently have been high. The town used to install signs that referenced a ‘Blind Driveway’ but no longer does so, Mann said, because people don’t know what it means anymore.

“They do not necessarily use that terminology anymore only because people don’t understand what a ‘blind driveway’ is—they might think it’s a resident who was blind,” he said.

Police Capt. John DiFederico asked whether McKenna and another resident in attendance—Evelyn Ness of 179 Heritage Hill Road—had trouble from motorists traveling eastbound there.

The residents responded no.

“If you are coming out of our driveway and you want to take a left up the hill, it’s taking your life into your hands,” McKenna said.

It’s even worse when there is snow on the ground, because it’s difficult to pick up speed there, she added.

Once approved, the ‘Hidden Driveway’ sign could be installed within two weeks.