Michael and Joan Allocca have lived in New Canaan for more than 30 years, 10 of which have been spent on Kimberly Place. When they first purchased the property, they discovered that a stipulation existed on behalf of an ancient stone wall that ran along the rear of their property line.

“We heard that the stone wall was grandfathered in,” Joan Allocca told NewCanaanite.com. “We weren’t allowed to touch it, it was supposed to remain the way it was.”

The reason for the conservation of the wall can be traced back to the 17th Century, long before the town of New Canaan was even established. It is one of the last remaining pieces of the Perambulation Line—the original border of Stamford and Norwalk.

The town of Stamford was originally settled in 1641 by the Colony of New Haven, historians say. Norwalk followed one decade later, settled by the Colony of Connecticut. A bit of a rivalry grew between the two colonies, and Stamford and Norwalk were caught in the middle.

After decades of political, economic and geographic debate, the Stamford-Norwalk boundaries were officially surveyed in 1685. The surveyors started at the mouth of the Five Mile River, and following a south-north course established a border ending at the colony line which at that time was well within present-day Westchester County (and would be until 1731 when Connecticut was forced to give up the land to New York).

The boundary was called the Perambulation Line, a term with origins in England where officials would walk the borders–or “perambulate the bounds”–of their towns to see if their neighbors were infringing upon a town’s boundaries. In many cases, the boundaries were only defined as a line on the map, but when it came to the Stamford-Norwalk line, it was demarcated by an actual wall that ran the entirety of the border. 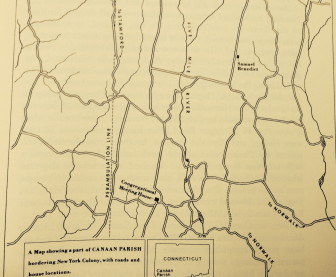 This map in Mary Louise King’s “Portrait of New Canaan” shows the path of the Perambulation Line which marked the border between Stamford and Norwalk before the town of New Canaan was incorporated.

According to New Canaan historian Mary Louise King in her “Portrait of New Canaan,” if the wall still existed today, it would enter New Canaan at what is now Brookside Road then run across South Avenue past the intersection of Rte. 106 at Park Street, then through Mead Park, across Elm and Weed Streets, and parallel to West Road.

Land west of the wall belonged to Stamford; property to the east was Norwalk. Accordingly, for residents living in Canaan Parish, there was zero confusion as to where taxes needed to be paid—until 1801, when Canaan Parish morphed into the town of New Canaan. 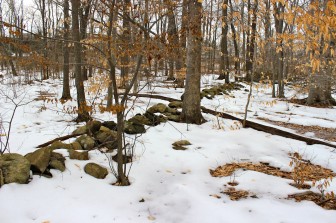 One of the last remaining stretches of the Perambulation Line exists in the woods east of New Canaan High School. What was once Stamford was on the left of this stone wall; on the right was Norwalk. Terry Dinan photo

New Canaan’s incorporation was the death knell for the now-useless Perambulation Line, since the land no longer needed to be split. Most of the wall was dismantled—with two exceptions. A small span of the Perambulation Line exists about 20 yards off the trail leading from the back parking lot at New Canaan High School to South Ave. The other stretch is behind the houses on the west side of Kimberly Place.

“I think it’s great,” Joan Allocca said. “It’s just a nice touch to a special neighborhood and a special area where we live.”