For years, Mimi Findlay had thought that the ‘H.L.’ signature on a hunting-scene tapestry hanging in the dining room at Waveny House referred to a member of the Lapham family. 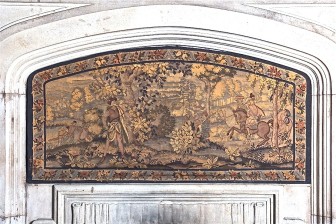 The Herter Looms tapestry above the fireplace in the dining room at Waveny House. Mimi Findlay photo

That’s understandable, as the tapestry is dated 1912, the year the Laphams had the iconic brick mansion built on their sprawling property that flanked South Avenue (then a popular horseracing road sometimes called the “New Road” to Darien or “Two-mile road,” historians say).

Then, earlier this year, as restoration began on the limestone fireplace in Waveny House’s Great Hall—that work undertaken thanks to the generosity of an organization that Findlay had helped found eight years ago, the New Canaan Preservation Alliance—Recreation Director Steve Benko came upon a handwritten note in his archives that quoted a Lapham relative, David Lapham, in reference to the tapestry.

According to Benko, Ruth Lapham Lloyd prior to passing and had told this relative that all the wallpaper in the Grand Hall, Dining Room and upstairs and hallway had been done by a firm out of New York City called Herter Looms. 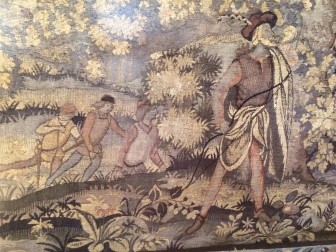 A close-up of the Herter Looms tapestry at Waveny House. Credit: Michael Dinan

On Tuesday, Benko told the Board of Selectmen—by way of requesting $5,230 in order to have a specialist firm out of South Salem, N.Y. clean, fumigate, re-back and otherwise restore the tapestry—that he looked up ‘Herter Looms’ and quickly found that the firm, and tapestry, “has historical significance.”

In fact, Findlay—herself a thorough local historian—explained in an email to NewCanaanite.com that Herter Looms was a business created by a remarkable 19th and early-20th Century man from an equally celebrated family.

“Herter Looms was founded by the artists Adele and Albert Herter in 1909, Findlay said. “Albert was the son of Christian Herter, the greatest cabinet-maker and decorator of the early Gilded Age—1865-1885—he, and his older brother Gustave Herter, were designers and decorators of several rooms in the Lockwood-Mathews Mansion, early in their Christian’s career.”

Adele and Albert Herter imported looms and artisans from France, where they had been painting for one decade following their marriage, Findlay said. 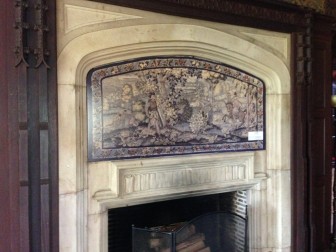 An enlarged photograph of the tapestry sits in place of it while restoration work is done off-site. Credit: Mimi Findlay

“They opened a decorating shop in New York City and began to produce medieval inspired tapestries, as well as furniture and decorations in the medieval taste. Their studios painted all the canvas wall coverings of Waveny House and provided most of the existing furniture, lamps, and sconces. The Herters decorated their house in East Hampton on Georgia Pond with Asian motifs, red lacquer walls and furniture, and designed gardens to complement these interiors. Some of their walls had elaborately painted decorations, to demonstrate their artistic sensibilities.”

The tapestry in the dining room at Waveny House appears to depict a hunting scene with two parties, including men on horseback and one hunter with a bow and arrow.

Some of the Herters’ work comes up at auction now and again, Findlay said.

“Their tapestries filled a void when most European tapestries, all the rage at the turn of the century, became hard to find,” she said.

“Waveny’s tapestry has become faded from 100 years of direct sunlight and dirty from soot from fires lit in the fireplace below. Following its conservation it will be somewhat protected from these environmental hazards. There are Herter Looms tapestries in many museum collections, including the Metropolitan Museum and the Brooklyn Museum.”

While the tapestry is “in the shop”—the Textile Conservation Workshop of South Salem—an enlarged photo of the tapestry hangs in its place, Benko said.

The firm is “very reputable,” he said. “They’re all artisans and I have seen some of their work they are doing while I was up at their workshop and they do a lot of restorations.”

Selectman Beth Jones asked at the meeting whether the restored tapestry would return as it was before or under some sort of cover. Benko said the fireplace in the dining room is used less often than it had been in the past and that trying to panel over or otherwise cover up the tapestry could damage it further.

“I think we need to do this,” Selectman Nick Williams said. “It sounds like a small treasure the town has of historical significance.”

Together with First Selectman Rob Mallozzi, the full board voted 3-0 in favor of the contract with Textile Conservation Workshop.

For Findlay, the Waveny House tapestry is not the first time she’s encountered the work of the remarkable Herter family.

More than 10 years ago, she said, she had been waiting for a train in the Gare de L’Est in Paris “and noticed an enormous canvas covering an entire wall, depicting American and French soldiers boarding a train to take them to the Eastern front in World War I.”

“It was clearly signed Albert Herter, and was painted in memory of his son, killed during that war,” Findlay recalled.

Another mural hangs in the Boston House of Representatives in honor of his other son, Christian, who served as Governor of Massachusetts and then as U.S. Secretary of State, she said.

“The Waveny tapestry wonderful discovery in the world of decorative arts and is a New Canaan treasure.”