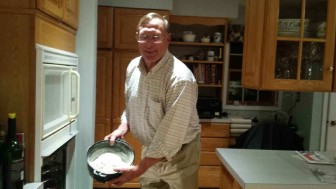 There, in a Cape-style home that Benko’s father built himself in 1951—it stands today—Franco likely first tasted an unusually soft and savory Irish soda bread baked by Steve’s mom, Madeline Benko (née Murphy).

This Saturday, as he and some 15-odd other invited guests have done for nearly 20 years, Franco will journey to Benko’s house on Douglas Road for a full St. Patrick’s Day dinner cooked by his friend, featuring what he calls “the tightest-kept secret in town.”

“That is the soda bread and you cannot get that recipe out of him,” Franco said. “It is impossible to get. He won’t share it. He will not. He will share the soda bread with you. He won’t tell you how to make it. He will not tell you how to make it and he will not talk about it. But it is very good. It is nice and tight, but inside there is a very compelling softness or—I don’t know—it doesn’t taste dry. Sometimes soda bread can be really dry. His is not like that and it is wonderfully flavorful. It is not without personality.”

Passed down through generations of women in the family, the recipe now is kept by Steve Benko and his wife, Sue, and has emerged for many guests as the centerpiece of annual St. Patrick’s Day dinners at their home, continuing a longstanding New Canaan tradition.

Rob Mallozzi, who serves as New Canaan’s first selectman, is a regular at the dinners. Calling Benko a “wonderful cook” who generously shares other recipes, Mallozzi said the Irish soda bread somehow has “the right blend of carroway seeds and the right blend of raisins and sweetness and it’s just perfect.”

“I just know I’ll have it, and when I go on Saturday night, I will eat more of the bread than anything else that he serves, it’s just that good. I don’t know how to explain it. It crumbles the right way, with a sweet flavor and I don’t know how he does it. I’m getting hungry talking about it.”

The Benkos are a prominent and established local family—Steve’s uncle, his mother’s brother, was Bill Murphy, the longtime and legendary NCHS basketball, baseball and soccer coach who also served as an assistant football coach under Joe Sikorski. Locals will recall that Murphy, also a physical education teacher, coached the Rams basketball team that won New Canaan’s last state championship, in 1962—the squad featured Gary Liberatore, who will be speaking Thursday at the New Canaan Historical Society.

Franco remembered the late Madeline Benko as a “very interesting” and “extraordinarily kind” woman who was known for the extended work she did for local elderly residents. She also put extra effort into what she put on the table, he recalled.

“She made things that kids like that went beyond peanut butter and jelly. They were good lunches with sandwiches of some sort, or burgers. It was good. The table was set. It was an orderly table. There were napkins, plates—not paper plates—and I do not recall drinking soda there. I am pretty sure it was milk.”

The Irish soda bread emanated from that same kitchen and it “has a legacy,” Franco said.

“The soda bread has bloodlines. This has been in his family for how long? Fifty years? Eighty years?”

Even Benko himself isn’t sure.

He recalls that his mother used to throw a big St. Patrick’s Day party for family and friends on Orchard every year, dinner for 30 people.

“Mom had a recipe for it, and she probably got it from her mother,” Benko said.

Benko’s mother wrote down the recipe and gave it to his wife some years ago, and he’s been making it every year for the past 15 or 16 years—baking about eight loaves each season now, some for friends and family, others for the party.

“I have not given it out,” Benko said of the recipe. “Kind of kept it a secret.”

The secret is in able hands, Franco said.

Benko for Saturday will serve corned beef, boiled potatoes with rosemary, Brussels sprouts with pancetta bacon and other holiday fare.

“He can cook for large amounts of people and I have never seen him ever following any cooking instructions—he just does it,” Franco said of his friend. (We note here that Benko also is one of the primary cooks at the New Canaan Old Timers Association celebrations.)

“He always had a natural instinct—and when I say instinct, it was completely instinct,” Franco said. “I don’t know if I have ever seen him reading a cookbook. He just knew where to go. I had my first mango at his house and I was probably 11 years old and his mother put a few mangoes on the table and I said, ‘What are those? What are those?’ and Steve started going, ‘Those are mangoes. Those are mangoes.’ And it was just like that over there. I think this comes from his maternal side.”

Benko said he’s gained a sort of reputation in the kitchen as a result of the Irish soda bread, whose recipe he described as “very simple.”

Asked who will carry on the Benko family tradition, he said: “I’ll give it to my kids. They can take it. But it’s fun.”