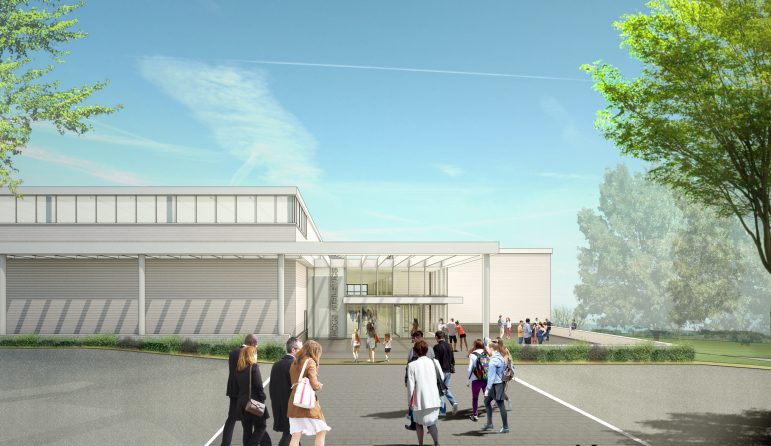 Saying a proposed new athletic facility at New Canaan Country School would loom too close to their property line as currently envisioned, neighbors of the private Frogtown Road institution are calling on officials to deny an application now before the town.

To be located east and a bit further away from Frogtown Road from an existing and outdated facility that will be razed, the new structure would sit 40 feet from the eastern property line—a distance that, though it technically meets the setback requirement of 35 feet laid out in the New Canaan Zoning Regulations, is at “astonishingly close range” to the residential property that’s been in George Moore’s family since about 1938, he said.

“We respectfully ask that the New Canaan Planning & Zoning board reject this proposal,” Moore told members of the P&Z Commission at their Jan. 30 regular meeting, held at Town Hall. “We feel like this is a real affront to our family’s property and property value. We are not necessarily going against 600 students and a great institution. We feel like we are defending New Canaan property owners. I think this is a massive building. I think it’s huge.”

Plans call for what appears from site renderings to be a larger athletic complex than the existing Watson Gym, with the new building shifted to the east with a parking lot below it, running roughly parallel to the Moore’s property line. (An existing pool would be relocated deeper into the Country School campus, under the plan.)

According to a narrative submitted on behalf of the school as part of its special permit application (the full application may be seen here, in the dropdown menu under ‘Frogtown Road’)—filed by attorney Steve Finn, a partner at Stamford-based Wofsey, Rosen, Kweskin & Kuriansky LLP—the current Watson building dates to 1973, has an aging physical plant and lacks adequate gym, locker room, fitness center, spectator viewing and athletic storage facilities. The proposed new building includes a larger gym and fitness center, better faculty and student locker rooms and additional flexible multi-purpose spaces, according to the application. It will see a net gain of 30 parking spaces. With approvals, construction would start this year and the new facility would open in 2019.

Country School needs a special permit under the zoning regulations because the project involves excavating or grading more than 1,000 cubic yards of earth material and/or soil disturbance of 10,000 square feet in area or more (see page 130 here).

As Finn told P&Z members during the public hearing, the Country School envisions no change in the use of the property with its project “and in addition, there is no intention to boost enrollment” in connection with the new facility.

Finn said that Country School officials have met with neighbors including the Moores and that as a result, the proposed new swimming pool was moved “much more interior to the campus” than originally proposed and that additional screening now is planned.

As of the hearing, the school and neighbors had not reached a mutually acceptable agreement, Finn said.

“The New Canaan Country School remains open to working out additional screening and wants to be a good neighbor to the extent reasonably possible,” Finn said.

Ultimately, pending an approval from the Inland Wetlands Commission related to the application and the need for more conversation between the applicant and neighbor, P&Z continued the matter to its next meeting.

Randy Salvatore, a longtime New Canaan resident and parent of three kids at the school who now serves as president of its Board of Trustees, said the rebuilding of the athletic facility is the most recent piece of a master plan developed four years ago and includes the renovation of the middle and lower schools.

He reviewed Country School’s history—it was founded in 1916 and has been at its current site since 1936—as well as the many ways that it has acted consistently as a “good community citizen,” partnering with and supporting local organizations including the New Canaan Basketball Association, New Canaan Baseball, Congregational Church, library, Historical Society, Glass House, Summer Theatre, Newcomers Club, West School and Horizons.

The 45-year-old Watson building is at the end of its useful life and though the school has been at its current level of 600 to 625 students for about 15 to 20 years and plans to stay there, the athletic facilities do not meet current needs and “structurally, the building is not capable of continuing on much longer,” he said.

For years, due to a lack of adequate facilities, Country School has bused students to the Jewish Community Center in Stamford and used Country Club of New Canaan for its squash program, among other places. The Country School recently has seen its lack of facilities affect enrollment and create some attrition as other schools have modernized, Salvatore said.

“At this point, we simply need to do this,” he said. Addressing the athletic facilities has been part of Country School’s plans for some 15 years and “we cannot delay that any more,” he added.

Keith Simpson, a town resident and prominent local landscape architect, addressed P&Z on behalf of the Moores though he noted, as George Moore himself did, that his criticism was not directed toward Country School as an institution.

“I, like so many people in this community, have the greatest respect for the school, so any comments are not a reflection on the very high quality of my opinion for the Country School,” Simpson said. “But this really is a matter of planning, location and scale.”

Simpson noted that the Moore’s home because of where it’s positioned with respect to the proposed new athletic facility would get “the utility end of the building,” and said that the use of the new structure would be far more intense and noisy than that of a classroom building.

The Moore family is “quite horrified by what they think they are looking at” in the site plans, Simpson said.

“I urge you not only study the plans and the elevations but also to go and visit the Moore property and stand at their property line and imagine if all these trees were taken down and the grade were built up from the property line approximately 10 feet and the building, which shows on the elevation drawings that I have seen to be 46 feet high, then you really—if you are standing on the property line and you can imagine all of this being cleared out—you would really have a building which would be almost 56 feet looming over you,” he said. “And it is, in fact, as close to the property line as is permitted by zoning but the zoning setback it is only 35 feet which really anticipates a residential structure, 35 feet away or 38 feet away. I can’t imagine it was ever really intended to have an enormous institutional building of this size and scale. So I do hope when you stand on the property line you would feel this immense construction and imagine how you would feel if this were to occur on your own property line and so close by.”

Commissioners asked them by how much the applicant would satisfy the setback between its proposed new building and the Moores’ (about five feet), whether renderings showed a retaining wall at the end of the southern parking lot (yes) and how high it was (maximum of four feet) and how late the proposed basketball facility would be open (8 p.m. at the latest).

Commissioner Kent Turner said that the parking lot south of the planned new athletics building is “very close to the property line.”

“It is going to have a huge impact on the neighbor,” Turner said. “Was there any thought given to putting that parking or, say, extending the other parking lot further south and elevating that green space? It is most unfortunate.”

McChord answered that the parking lot is meant to serve service people working at the facility, and that it’s part of the master plan “but we can look at that option.”

Asked what kind of buffer there would be between the facility and the neighbor’s property, Finn noted that an area between the two is wetlands “so that is a natural buffer.”

Commissioner Dan Radman asked what is the differential in grade between the south end of the new facility where the retaining wall is proposed and the Moore home.

McChord said the garage doors on the building are at about 330 feet while the elevation on the property line is about 220 feet.

“But what about the neighbor’s home, which is downhill from there, and there is a view angle opening in the tree line that hey are looking up toward the new gymnasium?” Radman said. “I’m just concerned about the loom factor of this large structure facing down toward their house.”

Moore in his comments said his family has been “very supportive” of Country School, which has erected seven new buildings in the time the two have been neighbors.

“I am not here opposing the school,” he said. “I am opposing the positioning of this building. We love the school. I think it’s a great institution, well run and well managed. I think you guys do a great job. I just wish that they had communicated a little bit earlier, personally, with our family.”

Though the two sides did meet the Country School made mention of a building and created a website that discussed its placement, “it was never mentioned just how close the building would be, what the landscaping would look like,” Moore said.

Finn noted that the project is in compliance with the zoning regulations and that the proposed structure slants away from the Moore property at its closest point.

“I think the answer to this dilemma is robust screening,” he said.

P&Z Chairman John Goodwin asked that the two sides continue their dialogue with an eye on reaching a mutually agreeable plan.

“The commission prefers if you settle your issues with the neighbors,” he said.