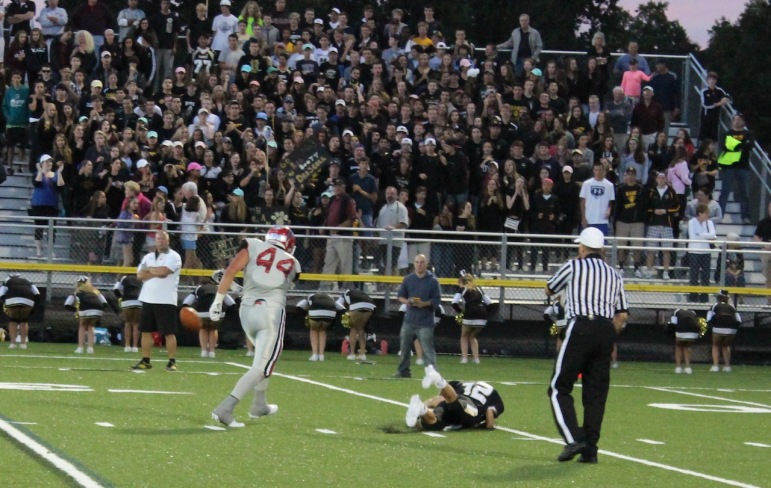 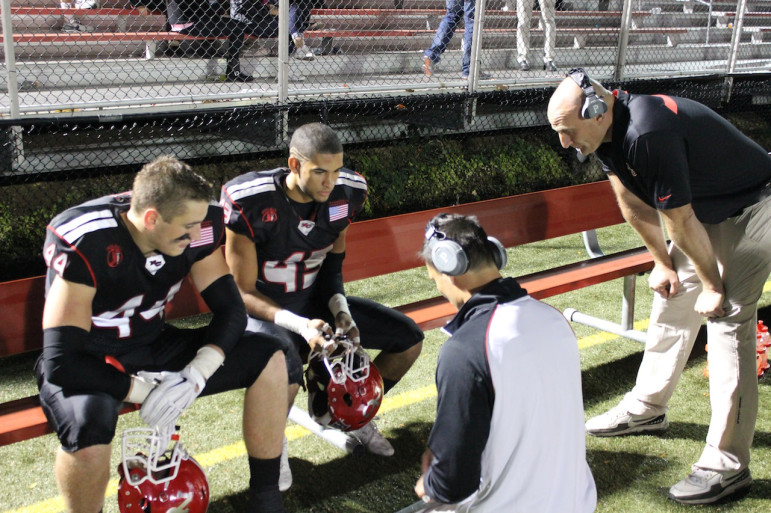 Co-captains Zach Allen and Alex LaPolice had a lot to smile about Friday night vs. Bassick. (Terry Dinan photo) 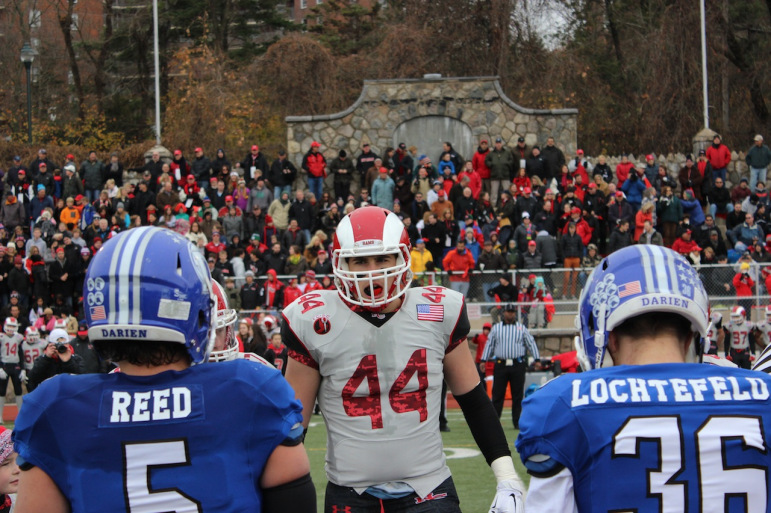 New Canaan Rams senior co-captain Zach Allen is about to close the book on one of the greatest football careers in program history. The school’s all-time leader in sacks, Allen was recently named as the state’s Gatorade Player of the Year, the first New Canaanite to be so honored since former Rams great and current defensive coordinator Chris Silverstri back in 1993. Allen—a High Honors student at NCHS—also has a chance this weekend to add a second state title ring to his collection as the Rams prepare to take on Darien in the Class L championship.

NewCanaanite.com spoke to Zach about everything from the NC-Darien rivalry to his favorite pre-game sandwich in our latest installment of 20 Questions.

First of all, congratulations on being named CT’s Gatorade Player of the Year. Where were you when you found out, and what was your reaction? 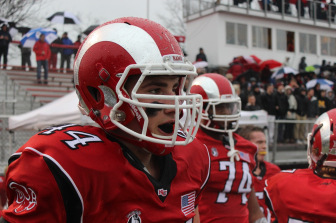 I was walking on my way to Physics class checking the news feed and Sean Patrick Bowley Tweeted “Zach Allen made Gatorade Player of the Year.” I did not expect it at all—there are so many great players in the state. It’s a complete honor and I’m so thankful to get it. It’s truly a testament to the New Canaan community and the support system that I’ve had.

I understand you found out on your sister Alexandra’s 14th birthday. Being a star performer herself on the stage and the dance floor, how did she react to it taking away some of her spotlight?

This season was supposed to be a down year for New Canaan after graduating almost 30 seniors. Now you guys are playing for another state championship. What does that say about the 2014 Rams?

We all knew what we were capable of. Last year’s team was great, but we worked so hard during the offseason and stayed focused. Our goal was to go undefeated and to win a state championship. We weren’t able to get one of them—Darien is a great team. But we get to play them again and hopefully we can achieve one of our two goals.

Last week the semifinal against Wethersfield was your last game at Dunning, a place you’ve played at since you were a little kid. What were the emotions like before, during and after that game? 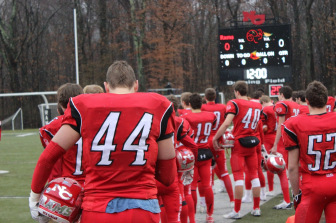 Going into the week, it never really hit me. It was just another business week. We were all focused on the game. I will probably get emotional after the season—we have time to reminisce then. But right now we have unfinished business.

What is your favorite memory of playing NC youth football?

Fourth grade beating Darien for the FCFL Championship. We had played them earlier in the year in my first game ever and we had gotten absolutely destroyed. We came back and fought through. Everybody really contributed, and it was my first taste of championship football.

What will you miss most about New Canaan?

The people. That’s the big thing. Everybody here is fantastic. It’s really a family feel, and that’s why they call New Canaan “The Next Station to Heaven.”

Tony’s. I always get a pre-game sandwich there.

I change it up every year. Sophomore year it was the Tony’s Big Burger. Last year it was the Joe Co., and right now I’m going with the Chicken Cutlet Cordon Bleu. It’s going to be tough at Northwestern. I’ll have to bring in a sandwich every week.

So now you’ve verbally committed to Northwestern and if that commitment holds up in less than a year you will go from playing Darien, Trinity Catholic, Wilton, etc. to potentially playing Nebraska, Michigan, Penn State, Ohio State … some of the biggest names in college football. How surreal is that?

I had never dreamed of this. I thought I was going to be a baseball player. Then in high school Coach Marinelli helped me fall in love with football again. And I thought, ‘I’m from New Canaan, there’s kids from Florida, California—all these guys.’ I was looking to maybe play some college football at a small D-III school. But again, just by being surrounded by so many great people teaching me so much, they helped me achieve the impossible. It’s going to be another challenge but you have to treat every game like it’s your last, and that’s how you can be successful.

Coach Marinelli told me earlier this year that you almost gave up playing football when you were a freshman. Can you tell me that story?

It was after freshman year, and I was playing offensive and defensive line. And I had played that throughout youth football. I was kind of getting bored, I didn’t really like it and wanted the ball in my hands, or at least have a shot at getting the ball in my hands. And coach told me that since he already had a bunch of big kids he was going to put me at outside linebacker. So I gave it another shot, and sophomore year it kind of clicked.

You were one of the most heavily recruited football players in recent history. What was the main reason you chose Northwestern over programs like UCLA, Boston College, Syracuse—you broke my heart by not going there—and the Ivy’s? 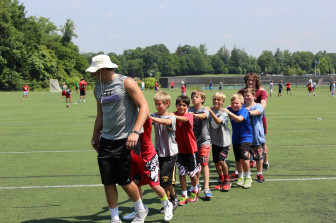 The combination of academics and athletics, it was just hard to turn down. Their economics program was a big thing for me because I want to do something in business. And Big 10 football is huge. And also when you visit a school you get a feeling like everyone says. I got that at a few schools, but at Northwestern it was a little bit stronger.

I know you love basketball, and you’ve been a big part of the program the past couple of years. Will you be playing basketball for the Rams again this season?

As of this point, no. I’m really just focused on football. The next basketball game isn’t until Wednesday, so we’ll see how everything plays out.

Who are your biggest influences on and off the football field? 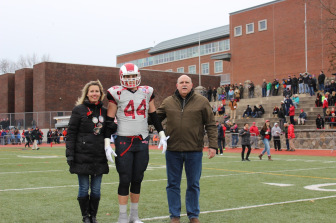 Definitely my parents. They ride me every day to be the best I can be. And also the coaching staff. They know what football goals I should be achieving and they push me every day. My teachers too. I remember Mrs. Guda, watching her teach a class and just handle everything—it was the first time I really saw what it takes to be successful. I’m still in touch with her even after she retired. She’s fantastic and one of the most important people in my life.

Who is your favorite pro football team?

I was a big Giants guy, but I’m also a Dolphins fan because my mom grew up in Miami. I’ll always have a New York-Miami split.

What is your fondest memory as a member of the Rams?

Winning the state championship last year. Everybody made a contribution.

You made a contribution with a pick-six in that game. You have a knack for coming up big in the biggest situations. What is it about those situations that make you rise to the occasion?

That’s how you build your legacy. That’s what you live for and why you play this sport. It’s to win and to leave your mark. That what we’ve been preaching this year…how will you leave your mark? Are you going to leave as a state champion or the team that could’ve, should’ve?

What former New Canaan player did you look up to the most? 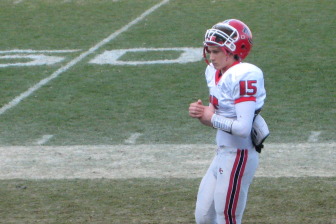 I remember in the youth camp, you go through individual drills with each guy and every single guy you looked at as a hero. Then you’d go on Friday nights and see guys like Kevin Macari and Conor Hanratty. One specific example with me was Matt Milano. I got called up at the end of the year with Alex LaPolice, Jim Keneally and Frank Cognetta. We got to be practice players. The first day he comes up to us and says, ‘Hey guys, great to have you here. If you have any questions, I’ll help you.’ And he was a big reason of why I wanted to stay in football. Guys like that are how programs are built, and that’s what Coach Marinelli instills in his players.

Part of your legacy is being the New Canaan career leader in sacks, and it looks like this is a record that might stand for a long time. Given the number of great players who have come through this school—Matt Kelley, Chris Dean, Scott Overbeck, Bruno Dorismond, etc.— how proud are you of that accomplishment?

I’m very proud of it, getting a record like that and being mentioned in the same breath with guys like that. The best thing for me would be to have two state championship rings and one FCIAC ring.

Best piece of advice anyone ever gave to you?

My parents who told me just do the best that you can, and once you get that go for more. Do the extra rep, the extra work and that’s going to make you better in everything you do. I try to live my life like that every single day.

Your last high school game is for the state championship against your arch-rival Darien. They kind of stunned everyone with that comeback Turkey Bowl win in the FCIAC Championship. Given all of that, how important is this game for you? 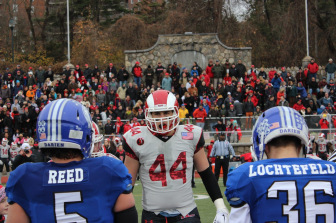 This is the moment that you live for. We’ve had our hardest wins and toughest losses against Darien from youth, through freshman year and the past few seasons. Just ending it like that is a dream come true, and hopefully we can end it with a state championship. I’m still going to be proud of all the guys I’ve worked with no matter what the result is.

One thought on “‘This is the Moment You Live For’: 20 Questions With Zach Allen”