After packing the room at New Canaan Library for a film and panel discussion about anxiety earlier this year, experts from an integrative mental health practice are returning next week for an interactive follow-up event. 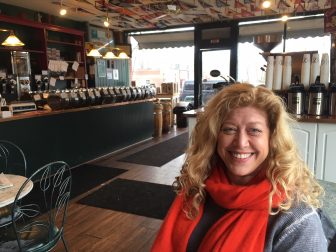 Elissa Stein of The Riverwalk Group, getting coffee at Zumbach’s in New Canaan. Credit: Michael Dinan

“From Angst to Ease: A Community Conversation” is to be held 6 to 8 p.m. on Tuesday, May 22 in the library’s Lamb Room (register here).

At the free event, attendees will learn techniques such as breathing and focusing exercises that focus on mindfulness, gratitude and interpersonal relationships, according to Elissa Stein, founder of Stamford-based Riverwalk Group.

“There was such an overwhelming response to the last event, we were all really kind of stunned,” Stein told NewCanaanite.com. “And we realized how many people are walking around with angst. And the response did not end with event, we got many calls to office. People wanted to know more about it.”

Next week’s event is designed to serve preteens, teens and adults, she said.

There, using methods from professionals including Dr. Dan Siegel and Dr. Brene Brown, Riverwalk will use presentations, activities, media and music to teach attendees about areas such as brain chemistry and vulnerability. A dietician from the practice, which provides therapy, support and programming to people in all stages of life, will share essential calming oils, Stein said.

“We are going to be doing interactive experiences that teach people how to calm themselves and provide internal ease,” she said.

Asked whether this follow-up event was planned at the time of the documentary film screening of “Angst” in January, Stein said, “No, this is in response to the response.”

She added: “This is the remedy. We are now providing things you can do to help your angst.”

“Many people called and asked how they could see the movie again and did we have any resources to recommend,” Stein said. “Lots of people approached us afterwards, wanting to talk about their own anxiety, family members’ or friends’ anxiety, expressing concern. Lots of people talked to us about how they noticed themselves or a friend or family member in the film, that certain things in the documentary clarified what anxiety actually was.”

The library’s Kathy Blance said the organization received calls from some who missed the screening in January of “Angst” and wanted more information.

“Obviously an important topic with anxiety so high all over,” Blance said.

2 thoughts on “‘This Is the Remedy’: Integrative Mental Health Practice Returns to New Canaan Library for Follow-up to Anxiety Film, Talk”