[Note: The property owners’ names have been removed from this article.]

Saying a walk through the house at 1031 Oenoke Ridge Road with its owners and contractor showed that it has been modified so extensively as to negate historic value, the objecting party withdrew its objection. The withdrawal was registered Monday with town officials.

The town has received a letter objecting to the planned demolition of a ca. 1800 home on a 7.6-acre Oenoke Ridge Road property. 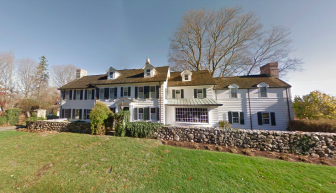 The owner of 1031 Oenoke Ridge Road—a Delaware-registered limited liability company that purchased it for $5.8 million in August 2016—applied April 20 for permits to demolish both the 6,742-square-foot house and pool.

Under Section 135-9 of the Town Code, if an individual objecting to a planned demolition demonstrates—in the eyes of the Historical Review Committee—that a structure “an age, style, condition or character that is of historical, architectural or cultural significance to the Town of New Canaan, then the committee may issue a 90-day demo delay.

It isn’t clear what is planned for the large property located in the four-acre zone or who who is behind the new ownership company, Kindridge LLC, as it’s registered in Delaware.

Under an objection filed May 9 with New Canaan’s town building official by resident Mimi Findlay, a historic preservationist who serves as founding chairman emerita of the New Canaan Preservation Alliance,the house is significant because throughout its the history, from the time it was a working farm to a country residence, “women appear to have steered it toward its destiny as they outlived their husbands.”

“An evolution of life styles is apparent, as the property was handed down through at least two generations in each era,” Findlay wrote. “The house also evolved with additions and subtractions, each era bringing new uses and aesthetics, reflecting New Canaan’s 200 years of continuous evolution as a town.”

The clapboard house had been owned previously by James Schettino, a local architect who designed the new Post Office, Findlay wrote.

“He and his wife bought it in 1982 from the estate of Alice Good Smith, widow of Gerard S. Smith, who had owned it since 1938 when her mother gave it to her in a bargain sale,” Findlay wrote in her objection. “Alice Campbell Good, with her husband William H. Good, lived in Brooklyn but bought this house as a summer residence in 1928.”

She continued: “Since the late nineteenth century, city residents had been taking the train to New Canaan to vacation in one of the inns or to rent a house here. They came to New Canaan to enjoy the country scenery, perhaps be gentlemen farmers, and look to buy an antique house. The Goods lived in Brooklyn and moved to New Canaan in 1928 for the summers, with two children. Their daughter Alice (1904-1977) was 14 years old, son Felix was 11.”

Alice Campbell Good’s parents, James and Annabella Campbell lived in Brookly though they both hailed from Scotland, according to Findlay—he was a Storage Merchant and she was a founder of St. John’s University’s Brooklyn Auxiliary.

“In 1900 at the age of 25, daughter Alice was a schoolteacher. William Howard Good was a lawyer at 24, his father born in Ireland, but had died by 1900 census; his mother was born in Maryland. His sister was a year older than he and they also lived in Brooklyn as did the Campbells. Alice Good graduated from Bryn Mawr College prior to teaching, then married Gerard Smith and lived at 880 St. Mark’s Place in Brooklyn; they had five sons. In 1938 Alice Good Smith received the property in a bargain sale from her mother and the Smiths continued to live there until she died in 1977, having lived in New Canaan for 49 years. She raised thoroughbred horses and was a ‘frequent competitor in horse shows and won many honors.’ ”

Her husband, Brooklyn-born Gerard Smith, was an investment banker whose company was based in Battery Park in lower Manhattan.

“He was a well-known polo player in the 1920’s and 30’s, breaking nearly every bone in his body at last once,” she said. “He was the star of the Brooklyn Riding and Driving Club’s undefeated team that won the National Open title in 1927, 1928 and 1929. His funeral was held in St Patrick’s Cathedral. He is listed in the 1943 Annual of the New Canaan Historical Society as an Honorary Member serving in the Armed Forces.”

Prior to them, the property was in the family of Mary Helena Travis, who had received it from her mother, Helena J. Travis in 1894. Helena’s husband was David Travis, who had turned it over to her in 1877 “as chattels,” Findlay noted. She cites a deed taht says: “All household and articles of use and ornament in the home at New Canaan, Fairfield Ct belonging to my wife, Helena Travis, in which house I live with her, and all the farm and garden utensils, and cows, horse, wagons, chickens and other articles whatsoever upon the place belong to her, my said wife, the same having been purchased with money earned by her; and in consideration of her support of me I hereby release to her any interest which it may be claimed I have on any such property.”

David Travis himself had come from Somers, N.Y. near Lake Mahopac and apparently had been married before and possibly served in the U.S. Army prior to the Civil War.

“The 1860 Census lists him and a wife, Sarah with several farm laborers and a servant, but no children. They are both 62 years old living in Somers, NY.”

Findlay’s history continued: “When he bought the property in 1869 from Drusilla Lockwood, it included a house, a big barn and a carriage barn. Mary Travis is quoted as saying that her father moved the carriage barn back and away from the road. In the course of making various improvements and alterations to the property he found the remnants of shoe-making equipment in the north part of the property.”

The property was 10 acres when David Travis bought it from John William Lockwood’s widow, Drusilla, according to Findlay. His father, Samuel Lockwood Jr., had been living there since 1809, when they married and bought five acres to build their house.