Officials said Monday that they’ve approached Aquarion about placing some town-specific lettering—such as ‘New Canaan, Home of the Rams’—on the water towers at Waveny. 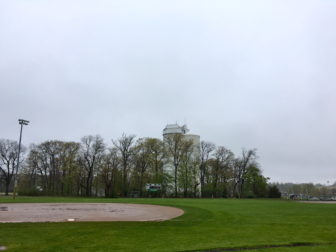 The water company is about to undertake a major project to repaint the towers, and Utilities Commission member Dan Welch said he broached the subject with its project manager to see what was possible.

“This seems like something pretty cool that we should be able to do as a town, is to get our name on the towers,” Welch said during the commission’s regular meeting, held at Town Hall.

“I talked to him [the Aquarion project manager] about colors. They’re white. They’re in the middle of Waveny. They’re right near the high school. Why can’t we have some kind of color? And I’m not saying one is black and one is red—that’s a bit much.” 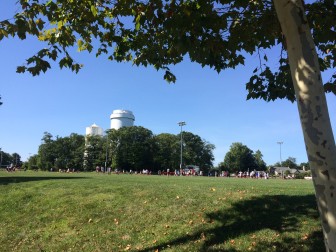 The first water tower at Waveny went up in the mid-1960s, according to Recreation Director Steve Benko. The second one went up in the early-‘90s, he told NewCanaanite.com during an interview.

Aquarion owns the water towers and the land that encircles them, commissioners said.

It isn’t clear just how lettering could be affixed to the towers.

Asked about the possibility of a painted message, Aquarion’s director of public relations, Peter Fazekas said: “It’s Aquarion’s policy to paint water tanks in our standard colors, light blue or green, to blend into their surroundings. We do not embellish our tanks with branding including our own logo. We follow this policy in our entire 51-town service area.”

Welch said he had raised the possibility of a vinyl wrap and that his contact at the company was responsive to that idea. The Board of Selectmen also have looked into the possibility of getting a New Canaan-specific message on the towers, which overlook the Orchard and Coppo Fields at Waveny as well as a turf playing field, tennis courts, Dunning Stadium and track at New Canaan High School to the north.

Commissioner Derek Bennett suggested light-heartedly that perhaps Randy the Ram could be represented at the top of one tower.

According to Welch, Aquarion’s crew this month will begin dismantling the cellular infrastructure now on the water towers and the project will take at least three months.

“This is on a timeline now,” he said.

Should the project appear feasible, next steps include figuring out who will own the effort from New Canaan’s side, speaking to Realtors and opening up conversations about possible funding, Welch said.