Officials last week voted unanimously in favor of allowing an area organization dedicated to building knowledge and mutual understanding between Japanese and Americans to hold a “cherry blossom festival” next month at Mead Park. 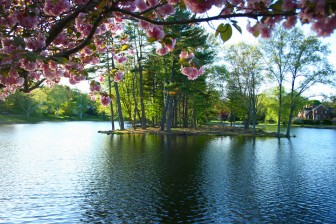 The Japan Society of Fairfield County’s traditional festival is to be held 1 to 4 p.m. on Sunday, April 30 following an 8-0 vote from the Parks & Recreation Commission.

“It happens to be [the society’s] 30th anniversary, so we would like to do a Sakura Matsuri at Mead Park to share Japanese culture and open it to the public,” Alexander said at the meeting, held in Lapham Community Center. “It’s a family friendly event, with some music and some crafts.”

To include bonsai flower arranging and perhaps also a karate demonstration, the festival will be held in the colonnade, overlooking Mead Pond.

The Japan Society of Fairfield County—founded in 1987 in Greenwich—also will donate a cherry tree to Mead Park, Alexander said, and is seeking a representative from the Consulate General of Japan in New York to attend a dedication ceremony.

Commissioners asked Alexander whether attendees would pay a fee (no, it’s free), whether the society yet had started advertising or promoting the event (not yet), whether there are a lot of cherry blossom trees at Mead (six around the pond) and how many are expected to attend (50 total throughout the event, coming and going).

Green asked whether Mead Park had any baseball games planned for the same time slot that might make it difficult to park.

Recreation Director Steve Benko answered that games were scheduled for the little league fields, but festival visitors could park where signed along the road that runs out toward Richmond Hill Road, in the small lot next to the old garage at the foot of Grove Street and, if needed, up in the commuter lot at Richmond Hill and Park Street.

Campbell said that Alexander already had received approval from the Special Events Committee, an administrative team that coordinates community events to be held in New Canaan to ensure that there are no safety, traffic or other problems caused by overlap.

Milligan asked Alexander whether she could gauge how many residents would attend.

Visitors will be able to bring their own picnic, and the society give away (not sell) pre-packaged food but not anything else, according to Benko.