Firefighters on Friday afternoon rushed to an eastern New Canaan residence to control a fire that fully engulfed the roof of a garage attached to a wood shingle home. 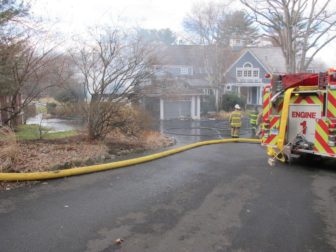 No one was injured in the two-alarm Cheese Spring Road fire that came in at about 12:40 p.m., according to New Canaan Fire Department Assistant Chief Russ Kimes.

“On arrival we found the garage roof was fully involved and our units began attacking it there,” Kimes told NewCanaanite.com from the scene at 610 Cheese Spring Road, a home set back at the end of a long driveway near the street’s intersection with Benedict Hill Road and the Wilton town line. “We were able to contain it and protect the rest of the structure.” 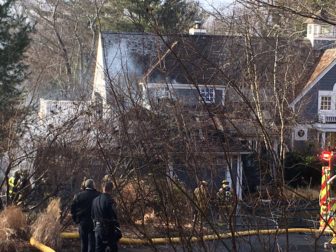 The homeowners were home at the time of the fire, and they exited quickly with their two children and dog, according to Fire Marshal Fred Baker.

It appears to have started with fireplace ashes placed in trash cans outside the garage, according to Baker.

“The main body of the home was undamaged as the garage was separated from the [main house] by a small enclosed breezeway,” he said.

This is what a proper ash disposal can looks like.

“The Fire Department reminds homeowners that fireplace ashes may contain hot embers for several days after a fire,” the fire marshal said. “Always use an appropriate metal can with a lid to properly dispose of ashes, if you can’t wait.”

Firefighters put out the blaze is less than 20 minutes, Baker said.

“It was very high winds, which made it challenging,” Kimes said.

Water supply was taken from a new dry fire hydrant installed at 571 Cheese Spring Road, nearby, according to Baker.

The garage roof suffered heavy damage, Kimes said, and firefighters immediately following the emergency checked the area to ensure there are no extensions to the main house that needed to be addressed.

Officials closed Cheese Spring Road to motor vehicle traffic south of Benedict Hill Road while the multiple units were on scene. The last units left the area at 3 p.m.

Note: The updated article includes the cause of the fire and other information from the fire marshal.