Two New Canaan women next week are opening what they’re calling “a private showroom” for custom men’s suits on Elm Street, a place where they plan to display samples and meet with clients. 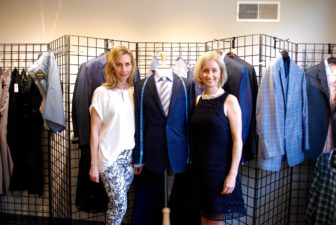 Keleigh McAuliffe and Melissa Engel at their J. Hilburn showroom on Elm Street.

“I think that New Canaan is a sophisticated market because of its proximity to New York City,” Engel said. “New Canaan is sensitive to fashion trends and quality, but is also definitely still price sensitive and interested in good value.”

Asked to describe New Canaan’s style, Engel said: “I would say that we are a very conservative and somewhat preppy town. There are some young, metro trends in the city that I don’t think New Canaan would adopt.”

Located at 199 Elm St.—directly across from the train station, in The Glass House building—the showroom will feature much of the Hilburn line, including suits, dress and casual shirts and shorts. It will open June 3.

Hilburn’s model typically calls for “personal stylists” who find their clients through events such as trunk shows, and take those men’s measurements, examine their current wardrobes, get a sense of their personal tastes and fashions, then order clothes for the men to try. With the showroom, Engel and McAuliffe said their clients have that option but also an opportunity to browse the line and get fitted off-site.

Engel said she became interested in working as a stylist when her husband, John, became a J. Hilburn customer years ago. With a background herself in working with a women’s line at Carlisle, Engel said she enjoyed the convenience of not needing to take her husband out shopping. When she began as a Hilburn stylist last July, Engel said she convinced McAuliffe—a friend for more than a decade whom she had met while McAuliffe worked for a different company based at The Glass House building—to team up with her.

McAuliffe said she had been looking for a creative way to fill her time and saw the J. Hilburn offer as an opportunity to be creative.

The pair also take a practical approach to their work.

“Men keep their software updated, and their phones, et cetera,” Engel said. “What I think that men fail to understand is that their wardrobe requires this same kind of an update.”

“We can take care of your weekend and weekday wardrobe,” she said.

For Engel, men should feel following a consultation that they “command the room when they walk in.”

“Whether it is at a social event or it’s a board room, we want to make sure that they feel like they nailed it in regards to how they look, so that they’re confident that they are able to accomplish whatever it is that they’re trying to do.”

The June 3 launch will feature a “shirt bar event” starting at 11 a.m. There, men can scan the J. Hilburn line and design their own shirts, including buttons.

Outside of events, the showroom will be open by appointment. Engel and McAuliffe can be reached at engelmcauliffe@gmail.com and 203-858-0266.