The New Canaan woman who kickstarted a fundraising campaign to help out a beloved crossing guard who needed $3,000 to get his car fixed on Wednesday afternoon delivered news of a grassroots community-wide effort to help him.

Terry Darden teared up when he learned (see video above) what had come so far from the Go Fund Me campaign launched by Carolyn Vermeer Ditlevsen, a South School mom who has gotten to know the crossing guard over the past few years and holds him in high esteem, as so many do. 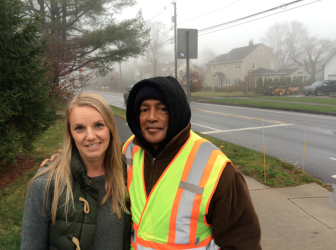 By the time he learned about it, the campaign was approaching $8,000, with more than 160 people contributing.

“I just thank the Lord I have people that pass me every day, reach out and touch me like I touch other people,” Darden told NewCanaanite.com moments after receiving the gift, standing at his post by the blinking light at South Avenue and Gower Road. “This is absolutely great and I appreciate it. I don’t know how to thank no more than say thank you, thank you. Keep thanking you.”

Darden, a Norwalk resident, would have had to forego a planned trip to see his mom in Florida in order to get his car fixed, and now can do both—and then some. (The car should be ready by Friday, he said.)

Ditlevsen and Nancy Roeder, joined by Ditlevsen’s son Owen, surprised Darden by presenting him with an oversized card that included this message, as well as an image from the fundraising page itself showing how much had been given:

Terry, you are such a ray of sunshine in our community. You keep our kids safe and our spirits bright. You always have a smile for everyone, and a treat for every dog. When the New Canaan Community heard about your broken down car, they wanted to help! We hope this gift will help make your holiday joyful. We hope you have a wonderful visit with our mother. We appreciate you Terry!!! Happy Holidays, The New Canaan Community

Told that he would need to log into the GoFundMe website in order to retrieve the funds, Darden said: “I don’t have a website.” Ditlevsen said she would sit down with him later in the day to create an email address and get him set up.

Known to scores of locals not only as the smiling crossing guard with the dog treats at South and Gower, but also as an employee of Walgreens on Pine Street, Darden said he is grateful to the town and to Police Chief Leon Krolikowski specifically “for giving me the opportunity to be a crossing guard for the town of New Canaan, and also for the two people that told me about the job, Jim George and Bill Ferri.”

“I want those guys to know how much I appreciate what they got me into by doing this,” he said.

Darden said his ultimate goal would be to pick up full-time work with the town in maintenance while continuing his part-time job as a crossing guard.

4 thoughts on “VIDEO: Crossing Guard Terry Darden Receives His Gift from the Community”