New Canaan’s oldest retail establishment is setting up a system through which it will aid those displaced and otherwise devastated by Tropical Storm Harvey in Texas. 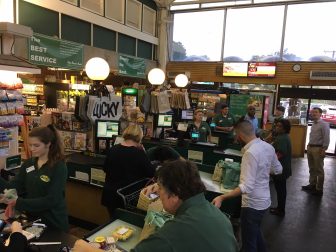 Walter Stewart’s Market customers starting Thursday, Aug. 31 and through Sept. 6 may direct their T-Bills rewards program balances toward relief for victims of Tropical Storm Harvey, and the market will match all donations. Credit: Michael Dinan

Walter Stewart’s Market from Aug. 31 to Sept. 6 is holding a special “T-Bill Donations Day,” through which customers participating in the business’s rewards program will be able to donate their balances to the American Red Cross and AmeriCares.

Stewart’s will match all cash that is raised in the effort.

“We are like everyone else—we are seeing devastation on the news,” Alex Stewart said. It has affected everyone. It’s a catastrophic thing and so if there’s a way we can help, we will.”

Thousands have lost their homes, and thousands have been rescued since the largest rainfall in mainland U.S. history struck coastal Texas on Friday. At least 15 people have been killed and officials warn that the toll is certain to rise as the full effects of the storm become clear.

Walter Stewart’s customers who participate in the T-Bill Rewards program—a card may be obtained from the store’s customer service staff or online here—will have an option to donate their balances to the fundraising effort. The 1907-established business in recent years has made the same offer following the Sept. 11, 2001 terrorist attacks, the 2004 Indian Ocean tsunami, Hurricane Katrina in 2005 and the 2010 Haiti earthquake, according to the Stewarts.

“We have gotten a lot of feedback from customers asking if they could donate T-bills to help out,” he said.

Under the rewards program, Stewart’s customers accrue points with each purchase they make and can use their balances toward free items in the store or for services, and they can also donate T-Bills back during drives such as this one.