Neighbors of a Weed Street homeowner have petitioned town officials to hold a public hearing for what appears to be a straightforward application to repair part of a driveway where it spans a small stream. 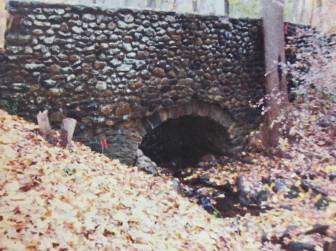 The stream crossing in question at 590 Weed St.

If the neighbors in the case of the project planned at 590 Weed St. had come forward with genuine, relevant concerns regarding how the proposed work would affect their own properties, landscape architect Keith Simpson said that he would be “totally understanding.”

“But we have a very hostile law firm representing neighbors, writing and claiming things about this application which, quite frankly, have nothing to do with this application,” Simpson, representing the applicant, told members of the Inland Wetlands Commission during a special meeting, held Monday at Town Hall.

“We are encountering some really rather peculiar hostility to this application and some claims which don’t even relate to the jurisdiction of the commission.”

It isn’t clear just what those claims are. Town officials last week received a petition with 42 signatures—said to total 65 by the time of Monday’s meeting—from a Stamford-based attorney. That attorney was not immediately available for comment.

The application itself yields no clues.

Essentially, an existing stream crossing and bridge structure is to be repaired before it deteriorates further: The retaining walls on either side of a culvert will be replaced, as well as the drive above that crosses the structure. A hydrological and hydraulic study attached to the application shows that the culvert is sufficiently large to accommodate a 100-year storm event.

Simpson requested that commissioners who wish to visit the site of the project do so in small numbers so that, effectively, those hostile neighbors are not allowed on the property. Because “site visits” by the commission to the physical location where projects such as this one are planned constitute a public meeting, people are allowed to attend them, even if they’re located on private property.

Commission Chairman Dan Stepanek, Simpson and experienced staff members in the Inland Wetlands Department all agreed that it’s highly unusual for neighbors to want to attend a site visit in New Canaan, if it’s ever happened at all.

Yet Town Attorney Ira Bloom, who attended the meeting, said that it’s perfectly legal and happens frequently in Westport.

“It is part of the public hearing process,” he said. “A site visit is a public meeting.”

Commissioner Angela Jameson noted that the visits themselves are very important to the group’s work.

“I think it makes our job that much harder if we do not go and look at the site,” she said. “It is so helpful to go and see the physical property so you can visualize it when charts and maps go up in meeting. And I think it is something that is useful for applicants, too, to know that commission members have been there and seen the physical property and therefore have a more detailed appreciation of the site.”

Simpson agreed and underscored that commissioners are now absolutely welcome to visit the site—it’s just the hostile neighbors that he would prefer not to have there.

“If we have hostility from lawyers claiming things which really don’t relate [to the application], then it will be a difficult meeting, Mr. Chairman,” Simpson said.

Simpson requested that Bloom and the commission draw up a set of ground rules for the site visit, so that—if the property owner agrees to move forward with the application—neighbors are not abusing the purpose of the gathering. (He also recommended that the commission make it more clear to applicants early on in the process that a site visit could be attended by the general public.)

Bloom called that request reasonable and said there could be rules about not taking photos as well as not interacting with each other or the commissioners making the site visit.

“They can walk quietly and listen, basically,” Bloom said.

The commission voted unanimously to hold a public hearing on the application on May 16.