Members of the Planning & Zoning Commission are urging officials to leave the front lawn of Town Hall free of event and campaign signs as the recently renovated and expanded building at 77 Main St. phases back in as the central location for municipal offices. 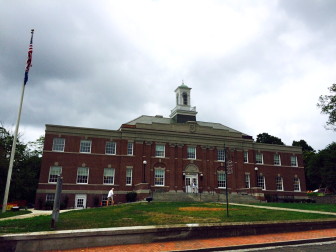 Officials are deciding whether to allow lawn signs to be posted out front of the newly renovated and expanded Town Hall. This photo from July 7, 2015, days after a Norway maple tree that had stood alongside the main path up the center of the front lawn was removed. Credit: Michael Dinan

Prior to closing for the major construction project two years ago, some 30 to 40 requests to place signs on the front lawn of Town Hall came in each year, officials said Tuesday at a special meeting of the Board of Selectmen.

It isn’t clear just how that proliferation developed, but with a “signature building like the new Town Hall” that “looks wonderful and is landscaped fairly well,” it doesn’t make sense to place signs out from, P&Z Commission Secretary Jean Grzelecki said at the meeting, held in the Training Room at the New Canaan Police Department.

Said fellow P&Z Commissioner Elizabeth DeLuca, head of the group’s sign committee: “We have this beautiful building and landscape design, and why would you want this clutter in front of this building?”

Though they stopped short of a formal vote, First Selectman Rob Mallozzi and Selectman Beth Jones both voiced support for the P&Z recommendation. A formal vote likely will come at the board’s next meeting, Mallozzi said. The question of whether to allow lawn signs on the front lawn of Town Hall emerged about three weeks ago.

“We just invested in a beautiful building, and we are trying to make the front a more park-like setting with benches and trees and a place to gather for lunch, and to see it cluttered with signs, in this day and age things have changed and to me it’s not as important as it used to be with the advent of the Internet and getting information that way,” Mallozzi said.

A notice board near the train station at Park and Elm is heavily used by local organizations, and the board at Farm and South which is overseen by the high school was not intended originally to promote only NCHS sports, but also community happenings, Grzelecki said.

Jones said she was “all in favor of leaving Town Hall beautiful and open to view.”

Though local organizations are accustomed to placing printed material in the form of lawn signs in front of Town Hall for purposes of promotion, it likely doesn’t make a difference given that people now turn to the Internet for their information, she said.

2 thoughts on “‘Why Would You Want This Clutter?’: P&Z Opposes Lawn Signs at Town Hall”