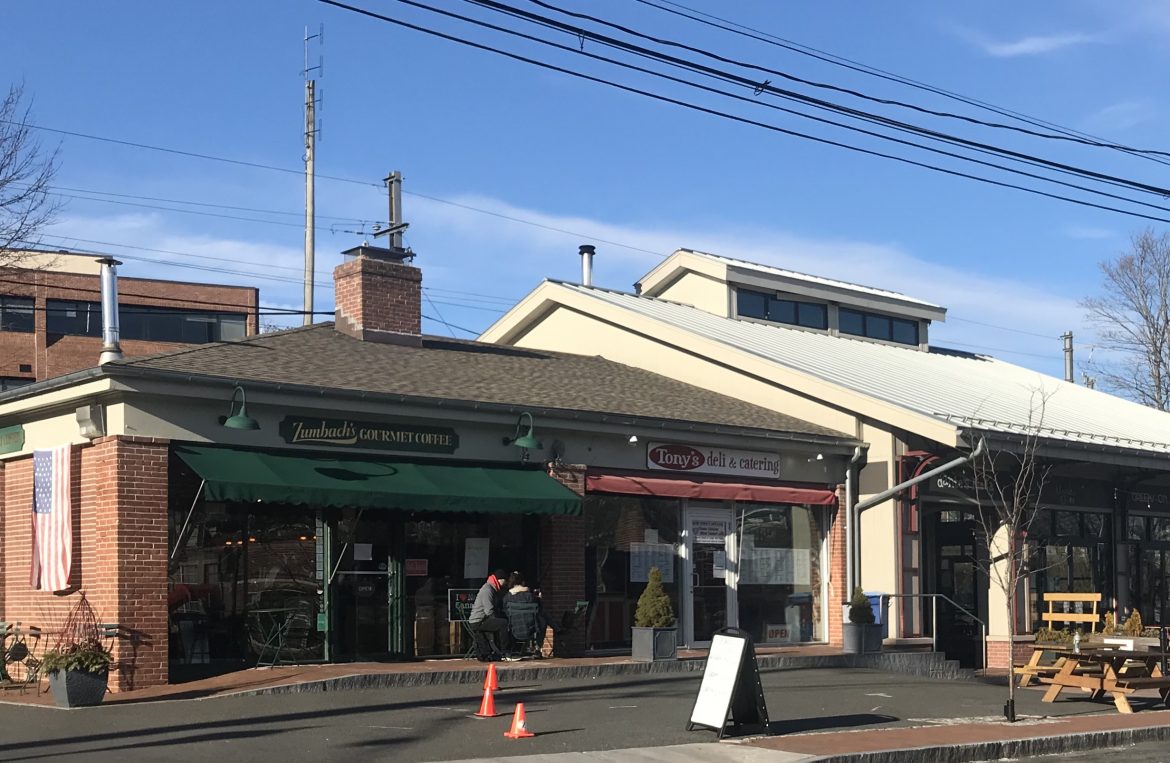 Two of New Canaan’s most popular downtown destinations stand to get increased pedestrian and seating areas out front, under a proposal that’s expected to come before the Planning & Zoning Commission this month.

Under an application submitted by a Stamford-based engineering and land surveyor company, the wide area out front of Zumbach’s Gourmet Coffee and Tony’s Deli would get brick paver patios similar to the one already installed outside the Pine Street Concessions food hall.

“The new brick paved patio expansion is intended to match the existing patio both in material as well as the herringbone paving pattern,” Brian McMahon of Redniss & Mead said in an application filed on behalf of property owner New Canaan Lumber Co. “Due to grade changes between the existing and expanded patio areas, an extension of the granite site steps currently along the building frontage is proposed out to the public sidewalk along Pine Street. The new patio area will include granite border materials and railings that are intended to match existing conditions.”

P&Z is expected to take up the application at its Jan. 26 meeting.

Currently, motor vehicles pull off of Pine Street using curb cuts in front of both Zumbach’s and Tony’s and then park between the pedestrian sidewalk along the street and narrow seating areas directly outside the businesses.

The half-acre parcel at 75 Pine St. and adjoined single-story buildings that house Zumbach’s and Tony’s in one and Pine Street Concessions in the other are located in the Business A zone.

The Commission’s approval is needed under the New Canaan Zoning Regulations for a site plan for non-office use (see page 78 here).

Department of Public Works Town Engineer Maria Coplit in Jan. 7 memo to P&Z noted that the site must be ADA compliant and called for “an accessible route plan.”

McMahon notes in the application that when P&Z approved Pine Street Concessions it called for “brick patio areas in along the front of the building.”

“It is noted that the approved plan from 2015 included these brick paver patios along the entire frontage of the building that currently sit on the site. However, the patio was only constructed in front of the addition that was constructed (i.e., the easterly half of the current building). A pre-existing curb cut, driveway and parking area was retained.”