Launched on a test basis in the summer of 2012 and evolving each year since into a more regular fixture downtown, the Pop-Up Park at South and Elm—host to activities year-round including World Cup Weekend, family gatherings, outdoor concerts and showcases for local eateries—has garnered positive feedback from residents, businesses and town officials. 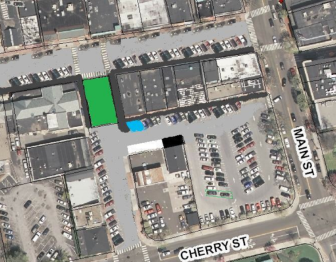 Here’s a vision for how South Avenue, Morse Court and the area of the Pop-Up Park may be configured. Parking along the curb at Morse Court and South Avenue switches from parallel to diagonal, a new handicapped parking spot is colored blue, a new loading zone white, dumpster area black and the park itself is green. Contributed image

On Wednesday night, the architects and volunteers who organize the popular park—noting that the labor required to set up and break down each summer weekend is not feasible long-term—turned to town planning officials for direction on whether the Pop-Up Park should become a summer-only, more frequent or even permanent feature of downtown New Canaan.

“The original concept was, ‘Let’s try it and see if it works,’ ” Pop-Up Park Committee member Arnold Karp said at a special meeting of the Plan Implementation Committee, held in the Training Room at the New Canaan Police Department.

“I think we’ve had three seasons to really test it out. It does work, so where do we take it from here? Because the hours that [New Canaan Chamber of Commerce Executive Director] Tucker [Murphy] and [Pop-Up Park volunteer] Jeff [Holland] and the committee besides myself have put in just bringing the furniture in and out, it is a lot of effort. The feedback we get—yes, there is always somebody who is unhappy—but most of the feedback we get is, ‘What weekends is it up?’ and ‘Can it be up there more often?’ … It seems to be a wonderful location long-term and I’d hate to sort of see three or four years’ worth work not taken to the next level.”

Said P&Z Secretary Jean Grzelecki in response: “It does almost seem that you are sort of at a tipping point.”

In a presentation to the committee, Murphy and Holland reviewed the history of the Pop-Up Park and called for support in addressing issues related to traffic flow, garbage and recycling, drainage, parking (such as adequate handicapped parking) and loading zones. 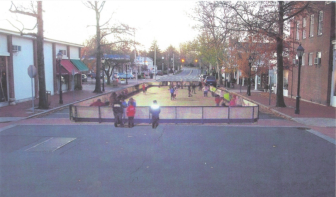 One possibility for a future Pop-Up Park is that it operates in the winter as an open outdoor skating rink. Contributed image

In some cases, Holland and other committee members floated ideas that may help solve problems, such as reconfiguring the always-confusing curbside parking at Morse Court so that cars park diagonally against the curb, re-locating a loading zone and defining a new area for dumpsters.

The recently updated Plan of Conservation and Development (on page 49) spotlights the Pop-Up Park as “an exceptional event that has proven very popular.”

“Opportunities to expand the number of events or extend their time period, especially for the ‘Pop-Up Park,’ should be pursued,” the POCD reads. 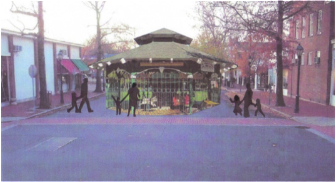 If installed longer-term, the Pop-Up Park could accommodate larger apparatus, such as a carousel. Contributed rendering

Murphy answered that volunteer groups such as the SLOBs, Boy Scouts and National Charity League all have been generous with their time, as have other residents, and that “staffing isn’t really a problem if [the Pop-Up Park] is up longer, because it is labor-intensive in terms of putting it up and taking it down.”

Holland sketched a vision for possible future Pop-Up Park use, including a skating rink in winter and different events rolling through the rest of the year (much as the Pop-Up Park was used last summer).

Murphy called for residents with ideas or suggestions for it to contact her at tucker@newcanaanchamber.com.

Committee members encouraged Murphy and Holland to get feedback from the Police Commission, the municipal body in charge of road closures and on-street parking.