Town resident Nicholas Smith, 17, had spent much of his downtime as a King Low Heywood Thomas freshman hanging out at New Canaan Library, playing tennis at the New Canaan Racquet Club or relaxing with friends.

That year, at his mother’s prompting (“My mom was always looking for ways to get me out of the house”), Smith applied to join the New Canaan Community Foundation’s Young Philanthropists. 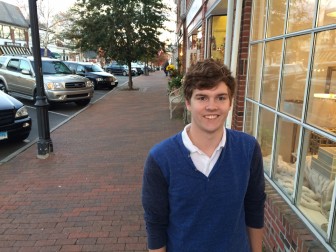 Though he’d volunteered as a server in soup kitchens with his family, and even spent two weeks working at a construction site in Appalachia, Smith said no prior experience had prepared him for his first meeting in the program, which gives participating teens a unique look into the nonprofit world by putting them fully in charge of grant allocations for area human services organizations.

“I saw basically that it wasn’t grownups leading it—it was purely a teen-led thing, the teens were the actual leaders,” Smith said from a table at Starbucks overlooking Park and Elm Streets on a recent evening, describing what hooked him into a program that has become an important part of his life. “Grownups tell us where to meet and organize meetings, but we were making the actual decisions about who gets what. It was very cool. We could take charge and decide what to do for ourselves. It’s not just deciding what movie to go see. We were deciding who gets what money, and that money affects people’s lives.”

Launched after about two years of fundraising that established its initial endowment, Young Philanthropists since 2008 has seen local teens (it’s open to students who live or go to school here) give away some $82,000—from organizations such as Waveny Care Network and New Canaan Volunteer Ambulance Corps in its first year to Meals-on-Wheels and Summer Theatre of New Canaan in 2014, according to Cynthia Gorey, NCCF’s executive director.

Structured around a “three T’s” philosophy that each participant can give of his or her Time, Talent or Treasure, Young Philanthropists challenges young New Canaanites to understand need in a non-surface way by looking through a new lens at otherwise familiar people and organizations here in town as well as surrounding communities, Gorey said.

As the stewards of grant funds that amounted to $4,062 total in 2008 and have grown steadily to about $20,000 in each of the past two years, Young Philanthropists sketch out and prioritize human services needs, hear from nonprofit agencies about the people they serve and how, review applications, fundraise, conduct site visits, assist in grant-writing and make often difficult determinations about where the money should go.

Beyond that singular and realistic peek into the nonprofit world’s financial realities, the teens say they’re taking lessons in humanity that transcend the nuts-and-bolts of the program’s monthly meetings or “season” (kickoff meeting in September, grants awards event in May).

“On a purely educational basis, it teaches us how to argue a case and look at opposing points of view, and to see what matters most in achieving our goal, so it’s good for critical thinking,” Smith said.

“On a different note, it taught me to look for things out of place, to look past the ‘Everyone seems well off and healthy.’ Look past that, because that’s not the case. Every single person has problems, whether it’s obvious or not. If you’re a homeless person, that’s obvious. But kids that don’t have food at home is a less obvious problem. So everyone has a problem and it isn’t there by choice, and it’s up to others to help them fix it. That is basically what I have learned.”

And that profound lesson—a life lesson that often requires a lifetime to grasp, if not longer—represents a value held if not explicitly expressed by many New Canaan parents, learned perhaps through church youth groups or scouting, Gorey said.

“I think the kids come to the program with a variety of cultural expectations and I think what happens is the kids all come from families that value caring for your fellow man, but parents haven’t necessarily sat down and said, ‘This is our value, this is important to us and this is what we do,’ ” Gorey said.

“In some [families] they have that overt discussion, or do charitable work and do volunteering and they see this program as an opportunity to enforce to their kids what they do in their daily lives, the way their values are present in their daily lives, so that they can live out the culture that their family already embraces.”

Smith’s mother, Deb Dodds (the family moved here from Bedford, N.Y. when Nicholas was in the fifth grade, and he attended Saxe for middle school) said she has watched him grow not only in his knowledge and skills with regard to nonprofit funding through Young Philanthropists, but personally too.

“I remember the first time he came back [from a meeting], he was so surprised that so many organizations in need were so close and in New Canaan,” she said. “That was a big eye-opener for him, because a lot of these kids come from a different background.”

“For him to realize that there was need so close to home, that was very important to him,” Dodds added. “We all know that New Canaan can be a bubble, and that can be good sometimes, and other times not so good, because it’s important to see the bigger picture.”

Dodds said she watched her son, together with those involved in the program, pick a focus that meant some very worthy applicants would not get funding in one cycle, and come to understand that those same agencies may be eligible the following year or later.

“He was very empathetic, and that is what I liked about the process,” she said. “It’s not often you see a teenager showing that empathy.”

New Canaan High School freshman Sarah Jane O’Connor—a field hockey player (who plans also to run track this year) and already is involved in Model UN and the NCHS Student Coalition—said she applied to join Young Philanthropists because she’s always been interested in community service and because the time commitment would still work with her already busy schedule.

Though she’s just a few meetings in, this statistic already is seared in O’Connor’s mind from one Stamford-based nonprofit organization that presented to Young Philanthropists in this young season: More than 30 percent of the city’s residents are immigrants.

“We’ve learned so much in a short amount of time,” O’Connor said.

Young Philanthropists opens the students’ minds to “a wider range of things that they didn’t know existed,” Gorey said. By visiting the Red Cross, Silver Hill Hospital, New Canaan YMCA, New Canaan Library and New Canaan Historical Society, Gorey said, the students “start to think about the role that those organizations play in their lives and in our community, and how incredibly important those nonprofits are, in ways that they may not have considered.”

Testimonials from participants in the program speak to those principles. Here are three:

For Smith, to be given ownership of decisions that affect so many people has been “very humbling, in the sense that we are given that much responsibility and we are the only ones entrusted with it.”

“The adults don’t do anything—if we decide to give everything to one charity, sure you may want some of that money but it is our choice,” he said. “It’s an experience unlike any other, mainly because of how unique it is to do something of this magnitude when you’re only a teenager.”

One thought on “Young Philanthropists: Lessons in Nonprofits, New Canaan and Humanity”