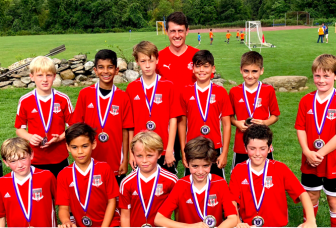 For those of you who are sports and movie fanatics, here’s one for you. I adore the English national anthem and I really love classic movies. Hearing the spirited English supporters raise “God Save the Queen” to new heights this past summer during England’s fabulous World Cup campaign gave me goose bumps before each match. Now, transpose that with George C Scott’s academy award winning performance in “Patton” (1970, screenplay by Francis Ford Coppola). That opening speech with General Patton set against the backdrop of the stars and stripes is engrained into my movie hall of fame for this line:

Yessir General Patton! And in our Happy and Glorious sports loving town of New Canaan, we love our winners too.

I’m condensing a few weeks of victorious action into this article; your patience is appreciated. Over the Labor Day weekend, the NCFC U12 Boys Red entered the John Jay Labor Day Tournament in South Salem, NY. Given the searing heat at the end of August, the boys had no practices and had not met their new coach Sam Byrne heading into the tournament. Winning seemed an afterthought given that “Series of Unfortunate Events” (2004 – Jim Carrey and Meryl Streep). “Against All Odds” (1994 – Jeff Bridges and Rachel Ward) the New Canaan boys stormed the field in the opening match versus Orange CT. Nine goals later, with contributions from Max “Ocho” Maggard, Javier Minuesa, Will “the thrill” Arnold, Drew DeGaetano and the new “Raging Bull,” (1980 – De Niro and Pesci) Rohan Shenoy, the boys made their opening statement:

Match 2 was a see saw match against Rye Brook, where the highlights boiled down to solid defense. Dylan Ho’s active goalkeeping and Oliver Sturn and Chase Harden’s ferocity on the backline kept NC’s hope of a championship alive with the final score 0 – 0. And now, on to the finals against the host team John Jay. Newly promoted to the Red team, Gregory Martin and Alex Ertegino debuted their solid play against a strong and physical John Jay team. Each side had close chances to score and secure the championship. But William Arnold, in goal for NC was not going to allow victory to be snatched away at his expense. At end of regulation, a clean sheet for Arnold as both sides remained scoreless. The refs and coaches surprisingly agreed that a shootout would decide the Championship.

And, while the parents anxiously watched their boys line up to take the PKs, the New Canaan boys relished the moment just like “Cool Hand Luke” (1960 – Paul Newman) at the poker table. DaGaetano first up…GOAL New Canaan! John Jay up next – miss off the post; NC – X JJ – O. Javi blisters one into the back of the net, JJ scores; NC – X X JJ- O X. Rogan Rocket Lowe converts into the corner, JJ as well; NC- X X X JJ – O X X. DJ Ho steps up and without hesitation drills one just inside the left post. Now for the climax – pan to Will “the thrill” Arnold…mano a mano, the Championship on the line. The John Jay player hits a solid shot down the middle as Arnold jumps right, and just like the Karate Kid (1984 Macchio. Morita and Shue), he kicks his legs outwards and saves the final shot to secure the Championship! Sorry no Elizabeth Shue running out for a kiss and a hug but just as SUBLIME a scene with our U12s going four for four in their pressure packed shootout debut..and to cap it off a brilliant save to win the Cup. Tarantino couldn’t have scripted it better. And just like the Queen, we returned home Happy, Victorious and truly Glorious!

With two weeks of practice under their belt the NCFC U12 Boys Red came prepared and dominated. The final score was NCFC 4 – Old Greenwich 1, – two goals and outstanding play came from Drew DeGaetano and two from the reliably superb midfielder, Javi Minuesa. With 15 minutes left on the clock, yours truly gets a call from the NCFC sidelines asking for a “relief” coach as Coach Sam Byrne had to leave early. Trotting over to the sidelines, I heard the roar, not of the crowd, but instead a few sarcastic Moms yelling, “Go Ho!” and go I did. Thanks to Brooks Walker and Chase Harden for preserving my 1-0 record and shutting down Old Greenwich in the final 10 minutes. Rumor has it that I am officially retiring from Coaching and keeping my day job 🙂 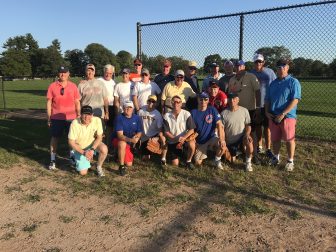 This once-a-year men’s softball game has become a New Canaan tradition. The teams are picked at random from those weekend (also weakened) warriors who show up to see if they still have the right stuff, generally local men in their 40s to 60s.

It was a tense back and forth contest, with the Marauder’s building an early 3 – 0 lead, which they slowly surrendered. The Recidivists scored 1 run in the second inning, 2 runs in the third inning and another 2 runs in the fourth inning to take the lead. The Recidivists held on to a slender 5 to 4 margin going into the seventh and final inning. The Marauders managed to erase the deficit in a four-run rally generated by a number of timely hits in their top-half of the seventh inning. This gave the Marauder’s an 8-5 lead which would prove to be the final tally. The Recidivists did manage to get two men on base in their bottom of the seventh inning and bring the tying run to the plate but shortstop Steve McCardell tracked down a difficult fly ball in the setting sun for the third out.

Doug Dooley pitched 7 strong innings for the Mauraders, Dave Woodman pitched the entire game for the Recidivists. For the Recidivists, Jim Petrus made a double play by catching a line drive and touching first base before the runner could return to the bag. Chip Stepacher initiated a similar double play, catching a line drive and then tossing to Kevin Wilder on third to catch a runner. Hitting doubles were: Rick Kilbride, Jim Petrus Stephen Von Jena and David Woodman. The Marauders had a tight infield, including Will Fornshell at third, Steve McCardell at shortstop, Chas Timberlake at first, and Joel Baum at second base who made numerous spectacular plays including a couple of double plays. Chas Timberlake hit safely in all four at-bats. Charlie Woodman might have had an inside-the-park home run but he was hampered by running in 10 pound steel-shanked lumberjack work boots so only reached second base. The game was umpired by Joe Pascarella. There were no injuries, much to the delight of everyone involved. 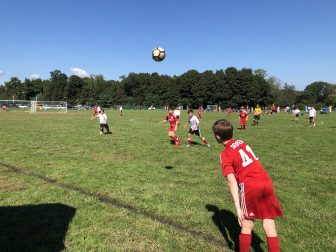 Despite the oppressive humidity and unrelenting sun, NC Boys 07 Black pulled out a victory over Greenwich on Sunday at Saxe. Within the first few minutes of the game, Greenwich scored. But the boys were undeterred; soon thereafter Stuart Hellmann put one up over the goalkeeper’s reach to tie the score. When Greenwich scored again, Simon Tchakarov answered back—the teams were neck-in-neck. However, NC was on the offensive most of the half with several additional shots on goal. This continued into the second half with Hellmann adding another to his tally and Mason Park’s penalty kick giving the boys a significant lead. Greenwich scored a third goal within the last five minutes as the boys’ energy began to lag but they were unable to tie the score. Congrats boys!