Eversource missed an Aug. 25 deadline to run natural gas lines to New Canaan’s public schools, and district officials say they’re now preparing for a more expensive backup whereby oil might be used for a period of time if the work still isn’t done by heating season. 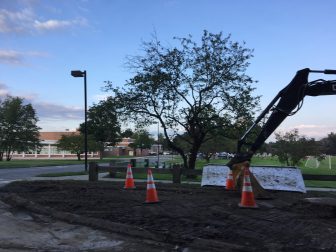 Delayed in part by weather, the company still has “quite a bit of work to do,” Superintendent of Schools Dr. Bryan Luizzi said during a regular meeting Monday of the Board of Education.

“They are working hard,” Luizzi said during the meeting, held in the Wagner Room at New Canaan High School. “There is weather involved with this. They have accepted responsibility for not being completed at this point. We anticipate the lines will be in place prior to the heating season, which generally there is an Oct. 15th date that people talk about, and we are looking at that and or into November if need be.”

His comments came in response to a request for an update on the project from Board Chair Dionna Carlson, who said she was seeking “specificity around a date.”

Reached by NewCanaanite.com after the meeting, Eversource media relations contact Mitch Gross said in a statement: “We understand the Board of Education’s concerns and are working as quickly and safely as we can to complete the installation of the natural gas line to both South School and Saxe Middle School by early October.”

Luizzi said that three district officials—Facilities Manager Daniel Clarke, Assistant Facilities Manager John Perna and Director of Finance and Operations Dr. Jo-Ann Keating—have met with an oil supplier “to make sure that if the natural gas is not in place in time to heat the buildings, that they could come in and put a smaller tank on site and since our burners are dual-fuel, we could burn oil until the natural gas is there.”

“So, we do have a backup plan, a Plan B—we don’t love it, we would prefer having natural gas there as promised—but we do recognize that it can be weather-dependent. I also believe there was some conversation about hitting some ledge along the way, which certainly they were aware of prior to starting work.”

Because the oil tank at South School has been removed and the one at Saxe Middle School filled in, temporary tanks would need to be installed if the natural gas lines aren’t installed by the time temperatures drop, he said.

Carlson noted that in making projections for its budget during the current fiscal year, the Board of Ed anticipated cost-savings from natural gas.

“So I guess I’d like to get a better understanding at what point are we under pressure on those cost savings?” Carlson said.

Luizzi responded that costs will rise if the district has to burn oil, “so it is something we will have to monitor closely as we go.”

“And there are additional costs with bringing smaller tanks on site and doing the hookup and getting those to run at Saxe and South,” he said.

Carlson asked whether, if the district did “run into a heating issue,” would officials be able to “ask for some sort of rebate.”

Luizzi said: “We fully anticipate having those conversations if necessary.”

Clarke said during the discussion Eversource is “making steady progress.”

“It’s a lot of inconvenience for the residents in the town, but overall it has an incredible opportunity for clean, efficiency and fuel,” Clarke said.