It’s always a good day when your season opener concludes in a win. However, when it’s against Darien, then it’s better than good, it’s awesome!  New Canaan 8 Red was beyond excited when their first game of the season, Saturday, September 8th ended in a 3-1 win against Darien. 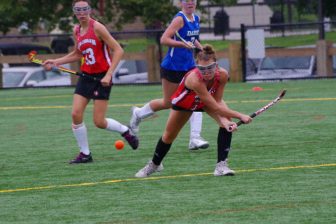 Katherine O’Connell sets-up to intercept a pass from the opponent. Contributed

Coach Abdel El Kettani was even more excited since the team had only one practice together before this big game. 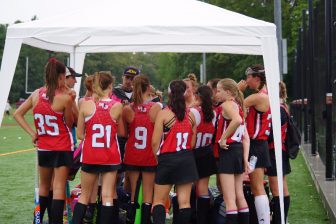 The game started off fast, both teams wanting to score, but the dynamic Ferraro/Parson-Hills duo took the field by storm. Polly Parsons-Hills drove a nice shot down the field to Shawna Ferraro who received the pass and dribbled around a few defenders before taking a hard shot on the net which was too fast for the goalie to stop.  New Canaan was up 1-0. Then there was a great deal of action on the field by NC Red and all players pitched in to keep the ball in scoring position. The second goal of the game went to Parsons-Hills after Ferraro shot her a pass and Hills, in her usual fashion, tricked the goalie by putting it into the net before the goalie even had time to react. With the rain coming down on the field, the rest of the game was a bit slippery as the girls seemed to tire-out during the second half. Thankfully, even being cold and wet, they still managed to keep Darien from taking over control. Towards the end, Cece Ferriera still had some pep in her step and was able to get the momentum going again when she took a great shot on goal. This seemed to rejuvenate the girls and they ended up scoring in the last 5 seconds of the game.  Parson-Hills took the ball into the far right corner and shot a drive across the goal to Ferraro who was ready and waiting on the left post. She tapped it in for her second goal of the day and the whistle blew to end the game. Amelia Totaro, goalie, had one save.

Hopefully, this is the first of many wins for this team and the start to a successful season. 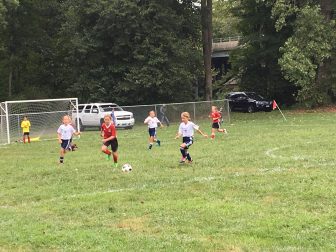 Maggie Greiner brings the ball down the field amidst Wilton players. Contributed

At Merwin Meadows, the NC Girls 09 Red dominated Wilton Blue, a team that they have had trouble overcoming in the past. Even with little practice, the girls put together a great performance to finally pull out a victory. They kept their shape and were quick and agile. During the first half, NC was on the offensive most of the time, giving Wilton little opportunity to score. With Mimi Matviak’s first goal off of an assist by Maggie Greiner, NC had a nice cushion going forward. Kathleen Langford and Eliza DeChristoper, in defense, were effective at playing the ball out from the back and goal keeper Whitney Hoegstadt saw little action. Just after half time, Ava Magliacano scored a second goal to give NC a comfortable lead. The girls—including forwards Niamh Cooney and Maggie Newport—continued to be aggressive and unintimidated by the Wilton players. Although they had more opportunities to score in the second half, defenders Zanna Moor and Madison Schulte and Lila Wolfson in goal was able to keep Wilton off for the shut-out.

Origins of Our Constitutional Rights, a Collaborative Lecture Series with New Canaan Museum and Historical Society, Focuses on the 13th Amendment: The Abolishment of Slavery and Involuntary Servitude