A plan to build an open porch onto the front of Sunrise Avenue home took a step forward last week. 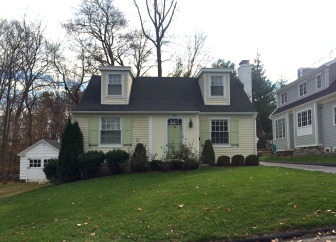 Zoning officials on Dec. 1 granted a variance to the owners of 64 Sunrise Ave. to build a few feet further into the front yard setback than town regulations allow.

Saying the proposed porch is in line with the neighborhood and other houses there, the Zoning Board of Appeals voted 5-0 in favor of granting the variance for the 1953 Cape. 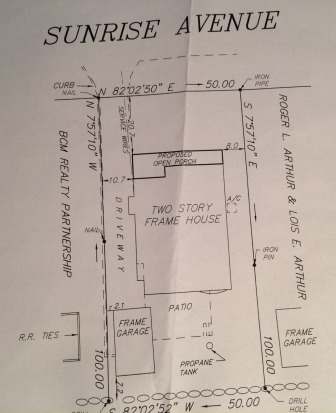 Site plan for 64 Sunrise Ave., which is slated to get a new open porch out front.

“To me, the size of the lot is clearly a hardship,” ZBA member John Mahoney said at the meeting, held in the Sturgess Room of the New Canaan Nature Center.

The Residential A Zone has a front yard setback of 30 feet, and normally, a house in the can only build an open porch six feet into it. The property owner in this case had been seeking to build about 20.7 feet from the front property line.

Architect Henry Rowett, speaking on behalf of the applicant, argued that if the ZBA applied Zone B rules to 64 Sunrise Ave. (it’s a 5,000-square-foot lot in a 10,000-square-foot zone), “we’d be in the green.” 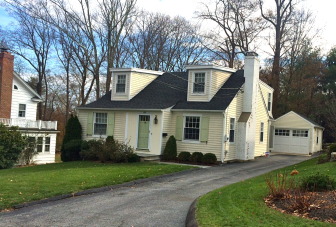 “We are saying that the hardship is such that [the Zoning Regulations] are restricting us well beyond the size of the lot,” he said.

He added that the applicant is “not asking for something that is unusual for the neighborhood,” bringing photos to the ZBA that “show the fact that existing houses on the street are already further up than what we are asking.”

Sunrise Avenue loops east of Marshall Ridge Road, dipping down toward the railroad tracks and overlooking the public tennis courts at Mead Park.

The variance was granted on conditions that the porch is completely open to the elements with no screening or glass and that any visible foundation is skinned in fieldstone.

Here’s where 64 Sunrise Ave. is located: