Sven Englund, joined out front of the New Canaan Firehouse on this crisp, clear Sunday morning by a half-dozen fellow firefighters, cupped his mouth and called up a ladder leaning against the 1938 structure at Main and Locust. 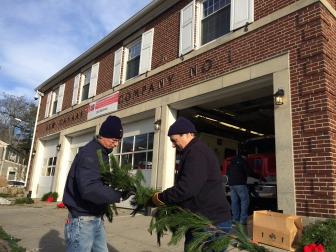 New Canaan firefighters Sven Englund (L) and Mark Savini (R) wrap the white pine roping in lights prior to looping it, according to local tradition, below the roofline of the firehouse at Main and Locust. It’s done on the first Sunday of December each year—in 2014, that’s Dec. 7. Credit: Michael Dinan

There, Mark Savini was about to affix a loop for hanging a string of white pine roping, wrapped with white Christmas lights, to adorn the firehouse’s façade through the holiday.

“Tighter,” Englund, a volunteer firefighter here since 1978, instructed good-naturedly. “It’s going to be too low. Don’t let it drop below the lintel.”

Within a few hours, the guys had looped 375 feet of the roping, bunting-like, along the roofline, hung six red-ribboned wreaths (with another large one out back) and framed in pine needles the four bays and entrance door at the iconic Main Street firehouse—an undisrupted, understood annual tradition of our town on the first Sunday of December that goes back as many generations as the firefighters themselves can remember. On Sunday, firefighters lending a hand included Englund, Stephen Parrett, Rob Mallozzi, Sam O’Mahony, James Caldero, Sveinn Bragason, Justin Defelice, David Bilotti and Fire Commission Chair Jack Horner. 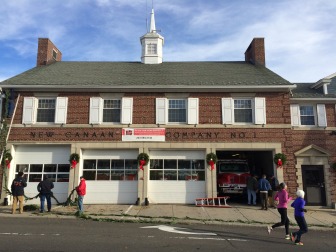 “One of the things said about the fire service is that it’s hundreds of years of tradition, unimpeded by improvement,” said Parrett, president of New Canaan Fire Co. 1, a New Canaan High School freshman the year Englund started as a volunteer.

“We do things the way we do things because that’s the way we were taught to do things by the people who were taught to do things. This is how it’s always been. It’s just the way we know. You do things the way you know. We fight the way we train. It’s important for us to have a nice look and it just comes together. We don’t sit here for weeks prior and discuss the methodology behind it. Everybody gets together, knows how it’s supposed to look and it gets done. It’s just like when you were young, raking the lawn with your dad or doing chores. You just did it because he did it.” 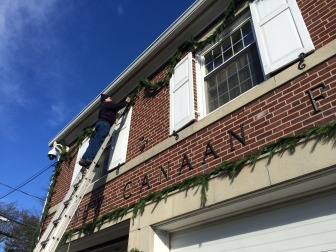 And for generations of New Canaanites, it’s a venerable tradition that not only beautifies the stately firehouse but also ushers in the season as much as Christmas Eve caroling at God’s Acre or, in more recent years, the lights on Elm Street’s trees and gift tags on downtown lampposts.

With Christmas music from a small amp playing above periodic tolling from God’s Acre and sporadic calls of gratitude from passing motorists, the firefighters laughed and ribbed each other, looped the roofline roping exactly 12 times and screwed in new light bulbs beside the wreaths as the firehouse flag was set to half-mast to mark Pearl Harbor Day. 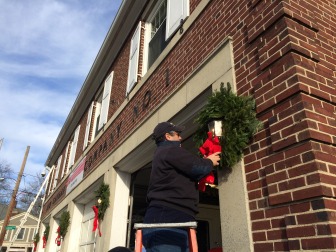 Longtime volunteer firefighter, New Canaan First Selectman Rob Mallozzi, hangs a wreath as part of the annual decorating at the firehouse. The first Sunday of December this year was Dec. 7, 2014. Credit: Michael Dinan

The firefighters themselves purchase the greenery and set the lights’ timers—they’ll stay up through the first week of January. On Christmas Eve, they’ll park a rescue vehicle up at the south end of God’s Acre so the carolers can see where they’re going, and also hand out candles to those in attendance. On the first day of Hanukkah, Dec. 17, an oversized menorah also will grace God’s Acre.

The decorated firehouse is something that townies look forward to seeing each year, Parrett said. 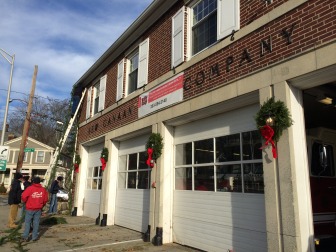 Mallozzi, a longtime volunteer firefighter, said he swings by to lend a hand for the firehouse decorating “because it’s just something I love to do.”

“This firehouse on the corner of Main Street is one of these iconic buildings that sets the whole tone for the place,” said Mallozzi, who is New Canaan’s first selectman. “It’s so nice to have it here and not an emergency complex somewhere out of town, but to have it as part of the center of our town, it adds to this historic, iconic New England downtown. It’s wonderful.”

He added that it’s an essential part of the decorated firehouse that the firefighters themselves see through the whole project, and that there is consistency through the years and generations.

New Canaan firefighters deck the firehouse at Main and Locust on Dec. 7, 2014—an annual tradition that goes back as long as locals remember, likely to when the structure was built in 1938. Credit: Michael Dinan

“That’s what’s so great about having Sven here or some of the guys, is that it’s always hung the exact same way,” Mallozzi said.

Asked from which guys he learned the practice, Englund named Bruce Meyer and John Slattery—the first two names that came to mind.

“I do it the way I was taught,” Englund said.

Here are some safety tips for this season from Fire Marshal Fred Baker: