Residents of New Canaan and neighboring towns, state and local officials, professionals in recovery treatment, clergy and those in recovery and with loved ones who have encountered the pain, heartache, hardships and struggles addiction brings formed the crowd. 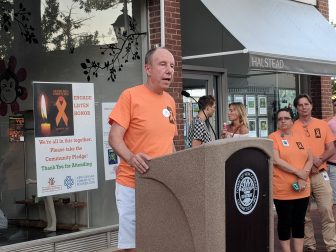 The founder of the New Canaan Parent Support Group, Paul Reinhardt, whose son Evan’s passing in July 2015 from a drug overdose inspired him to create the group, said shared stories will keep the conversation about addiction and recovery going and, hopefully, encourage others to open up and share their struggles as well.

“I think one of the most important things is having the four people from the community share their story of addiction being in their family—both all the pain that went with it and the recovery that takes place after it,” Reinhardt told NewCanaanite.com. “Even someone like me who lost his son, the chance that I’ve had to channel Evan’s memory through the New Canaan Parent Support group and an event like tonight’s is a positive story. By continuing to have people share, it might lead to more of those struggling with addiction to share their stories.” 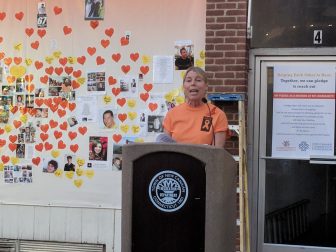 Cinnie Shaw, a therapist at a local inpatient acute care facility who works with patients who have co-occurring disorders that generally entail them going through a detox process as well as recovering from a mental health issue, addressed the crowd. She said her life’s work “has become partnering with individuals who have substance use disorders and assist them with their recovery journey.”

Shaw’s work, however, became excruciatingly personal in August 2015 when one of her five children, her son Gregory, died of an opioid overdose at the age of 25, she said.

“Gregory was perhaps the sweetest of all my children,” Shaw said. “He was caring, funny and kind. He was friends with everyone, a stranger to no one. He loved his family and friends. However, as his disease progressed, he lost the ability to focus on what he loved and the obsession to use predominated his life and destroyed him. Gregory’s journey with this disease started out just like many you’re familiar with—he was prescribed painkillers for an inflammation of the spinal cord. And he was not medically tapered off those painkillers.”

After becoming more tolerant of the painkillers, Gregory started using heroin because it was both “cheaper and easier” to obtain, she said. Gregory would complete detoxes and rehab stays at some of the finest acute care facilities on the East coast. Shaw and her family tried everything they could think of to help her son, she said. However, Gregory’s life ended tragically too soon before he could find his pathway to sustainable recovery.

“As a mother and a counselor, I’d like to share the two things I’ve learned from this journey,” Shaw said. “First, opioid use disorders are a chronic disease of the brain. The structure and neural pathways of a healthy brain are changed by opioid and other substance use over time. We cannot treat chronic diseases of the brain simply with acute and rehab care. Treatment must be individualized. I encourage all of you to learn about the many pathways to recovery in your community. And the second thing I’ve learned is that love and compassion heal. While I have every right to be angry and bitter, and have felt my fair share of both since Gregory died, I’ve learned that such feelings do not heal—they only harden the heart and create more suffering. What heals is giving the love I want to give my beautiful Gregory to others. What heals is connection through love, faith, family and community. Tonight is what healing’s all about. Thank you all for being a part of my healing journey.” 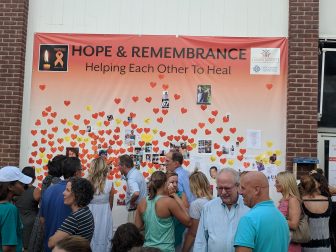 The event again featured a “Hope & Remembrance” banner that gave attendees the opportunity to share both photos of, and messages to those who were in their hearts. And several tables of pamphlets and posters with information about addiction and paths to recovery were also made available for attendees to learn more about the dreadful disease.

The event’s emcee was once again John Hamilton, chief clinical outreach officer and licensed alcohol and drug abuse counselor for Mountainside Treatment Center in Wilton, who has more than 30 years of experience in the field of addiction and mental health issues. 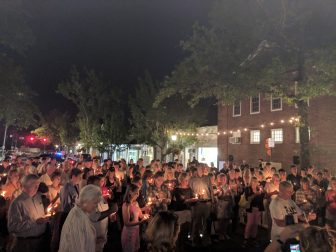 The candlelight vigil held at the conclusion of the event on Aug. 30, 2018. Credit: Jes Sauerhoff

“Seventy-two thousand Americans lost their lives last year due to an opioid overdose,” Hamilton told the crowd. “That’s 174 people dying per day. And if you factor in alcohol-related deaths, that number goes up to 415. So we have some work to do. But we have some wonderful people here in this community willing to help with the recovery efforts. One of those groups being the Ram Council at New Canaan High School which is a group of students who have made the commitment to abstain from drug and alcohol use during their entire stay at NCHS—which is a terrific thing on their part. We figure there are close to one hundred people who surround you in tonight’s audience that are in recovery. And if you combine all their years in sustained recovery, it probably totals over a thousand—which truly is an inspiration to everyone. We want to put a face to recovery and we appreciate the courage that those in recovery are showing by being here tonight.”

And for the second straight year, the evening concluded with a candlelight vigil, led by clergy and local faith leaders as those in attendance prayed in unison for those they have lost and those in recovery.