A New Canaan nonprofit organization dedicated to preserving natural open space in the town has hired a Connecticut native and Yale School of Forestry graduate as its new executive director. 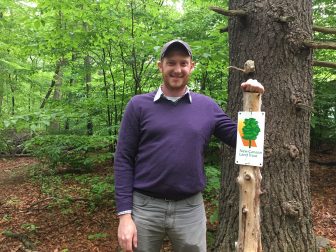 As executive director, Lefland will be in charge of the Land Trust’s 70 parcels of land, covering 389 acres. The organization also is seeking accreditation now with the National Land Trust Organization.

“I just love being outdoors,” Lefland told NewCanaanite.com. “I’ve always appreciated these kind of protected spaces the towns have, or states have, and so I thought this was a good way to apply the management and forest ecology knowledge that I have to preserving and protecting these special places around town.”

He succeeds Mike Johnson, who spent one year in the role as the Land Trust’s first-ever executive director, and stepped down in order to pursue a career in conservation in the Pacific Northwest.

Lefland earned a master’s degree in forest science from Yale, focusing on silviculture, managing resources and management plans for protected areas. Prior to Yale, Lefland worked at a nonprofit organization in Weston, Mass. called Land’s Sake, helping to manage stewardship and forestry programs. While he was in charge of many stewardship activities, he also worked with adults, students, and youth to help connect them with nature.

Lefland credited Johnson, a fellow graduate of the Yale School of Forestry, for helping him prepare for the job.

“There are a lot of projects going on right now,” Lefland said. “There’s a lot to learn. There are 70 or 75 parcels around town so it’s figuring out what land do we own and how we should manage that land. We’re going through the accreditation process right now with the National Land Trust Organization, and so figuring out where we are along that process and what needs to be done, and just kind of getting a feel for the town… it’s a lot, but I enjoy it. It’s kind of nice to be able to work on different projects throughout the day or throughout the week.”

Land Trust officials praised Johnson’s work. He helped the organization by “supporting the acquisition of the Silvermine Fowler Preserve, strengthening outreach and youth programs, stepping up stewardship and progressing the effort for national accreditation,” officials said.