Calling it a complicated solution to a problem that doesn’t exist, town officials rejected one resident’s proposed rotary for the difficult intersection of Farm and White Oak Shade Roads. 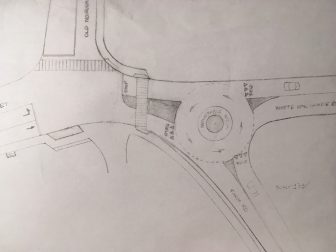 However, if New Canaan is to invest heavily in a solution for the intersection, it must address the most pressing problem facing traffic officials—namely, how to get pedestrians safely across it, according to DiFederico.

“I think probably an easier solution and more cost-effective solution would just be to put a crosswalk on White Oak Shade” and install a new sidewalk on the south side of Farm Road DiFederico said at the most recent meeting of the Traffic Calming Work Group. 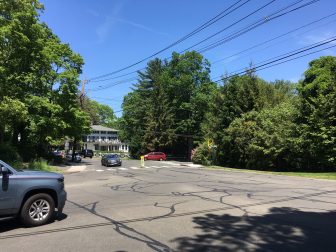 As it is now, a painted east-west crosswalk with a warning sign in the middle connects the southern end of Main Street with the western end of Old Norwalk Road, the start of a sidewalk that runs down toward Kiwanis Park.

Those walking in the crosswalk or coming down Main can hook up with the sidewalk already running up Farm Road on the north side. Yet pedestrians also come from White Oak Shade, and there’s no way for them to cross safely either that road or Farm, and the existing crosswalk could be made more safe by installing a push-button activated flashing beacon, officials said at the meeting, held May 16 at the New Canaan Police Department.

Holland made a strong case for the rotary, saying it could be installed on a test basis to start and touting it as a “refuge island” for pedestrians navigating the intersection.

That island “is an important feature here because it creates a halfway point where people can stop and keeps traffic moving,” Holland told the group, which includes police, fire, public works and emergency management officials.

According to Holland, the state Department of Transportation prefers to see traffic flow to full stops, so roundabouts are becoming more popular.

DiFederico noted that a driveway near the corner of Farm and Main could be problematic for the rotary design. Holland replied that “driveways are generally not included in roundabouts” because “you do not want it to appear as though it [a driveway] is road … because then people will go there thinking they are going somewhere and they are just going down a driveway.”

Holland also pulled out a town-commissioned traffic study from some years ago that had recommended installing a roundabout further west on Farm Road.

DiFederico noted that, fortunately, New Canaan has not seen accidents at the intersection.

“And although everything you say is accurate and correct about roundabouts, it’s a solution to a problem that doesn’t exist at this intersection,” he said.

“I think there is probably better solutions for pedestrian traffic like the light-up LEDs that we are looking at for there.”

He added: “I go through that intersection twice a day, every single day and everybody stops and everybody proceeds slowly through and it flows and even at 7 a.m. it gets backed up a little—but not nearly as bad as South and Farm. So it’s not a traffic flow problem, it’s just getting those pedestrians across that throws wrench, but I think having that light-up display or some way to alert drivers that there is a pedestrian in there is what we need to focus on.”