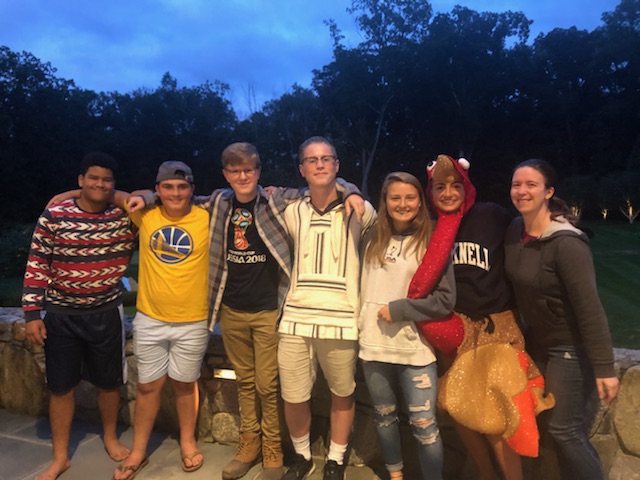 Note: Due to a snowstorm, the 2018 Turkey Trot has been moved to the Sunday after Thanksgiving—Nov. 25.

New Canaan High School senior Brielle Connelly first got involved in the Turkey Trot three years ago, as a member of its organizing committee.

She’d visited the annual fundraiser’s beneficiary organization, Open Doors in Norwalk—a nonprofit that provides shelter, food, clothing, case management and other services to homeless people—and the visit made a strong impression on her.

“I met the people that go there and they were so grateful for us being able to come,” Connelly said. “They knew the Turkey Trot and I though tit was really special to be able to do something fun that was a community event and for kids to appreciate the people in our area. I really liked the aspect of benefitting so many people in such a fun, community way.”

It’s a sense of civic-mindedness that’s been integral to the Turkey Trot since its inception, and the 5k run itself has deep ties to New Canaan families since its launch 15 years ago.

According to Robin Lord, a small number of friendly families—three or four—got together at that time with the idea of showing their own children something about giving back. What began as a small event that involved walking in Waveny grew into something far larger with more than 500 participants, said Lord, whose daughter Paige, a St. Luke’s School student, has been helping run the Turkey Trot for about the past five years.

What makes the Turkey Trot unique among charitable running events is that it’s run by kids with their families supporting them, Lord said. Those kids are both from public high schools—for example, this year Connelly is co-chairing with Weston High School senior David Tamburri—and private schools, including St. Luke’s, Greenwich Academy, Brunswick and King.

“The great part is that all these kids from different areas come together, they visit the shelter together, they see what goes on–the beds and bunks—learn what they’re doing it for, and it really drives them to work hard and raise as much as they possibly can each year, from September to race day,” Lord said.

This year, race day is Sunday, Nov. 18 and there will be no on-site race-day registration (see here).

The organizers’ hard work includes figuring out sponsors, T-shirts, payment systems and other logistics. The proceeds have been upwards of $25,000 in the past five years, Lord said.

“The shelter has really embraced the community and they count on us now, there is no turning back,” she said.

Erin McDonough, the director of community relations and marketing at Open Doors, said the Turkey Trot is “very important” to the organization.

“It’s such a rare and wonderful thing that it’s entirely volunteer-run with such a long history.”

Asked why she thinks the Turkey Trot has grown to such a large event, McDonough said, “I think people just want to know how they can help. And the Turkey Trot is a great way for families to get together and know they are supporting a good cause, and the money goes to help people for food and shelter right here in the community.”

She added: “You never know who might be in need. The neighbor you are helping might be closer than you think. One of the things I love about the Turkey Trot is that it is a really welcoming event. People come with kids, babies in strollers, people bring dogs. It’s just a really family-oriented day and some people look to beat personal records, so it all comes together.”

One of this year’s first-timers doing the Turkey Trot is New Canaan’s Amy Williams, who is also on the event’s committee. Williams said that for one thing, the Turkey Trot is “a great opportunity for me to do something with Bailey,” her son who is a junior at New Canaan High School.

“And to get involved in a local organization that really needs help—and it’s great the way the kids are running it with the parents sort of a bumper along the way—it’s a fantastic experience,” Williams said.