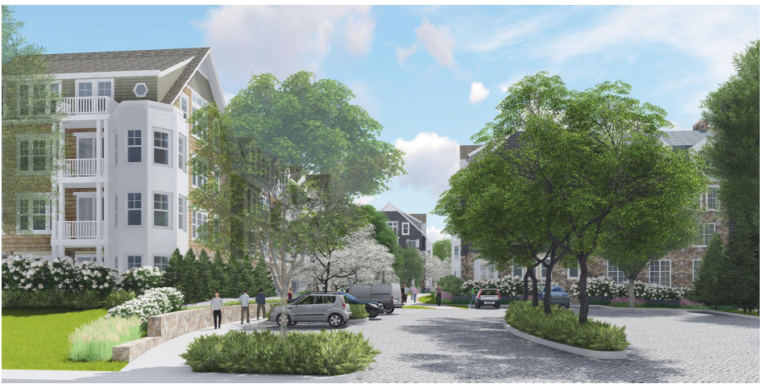 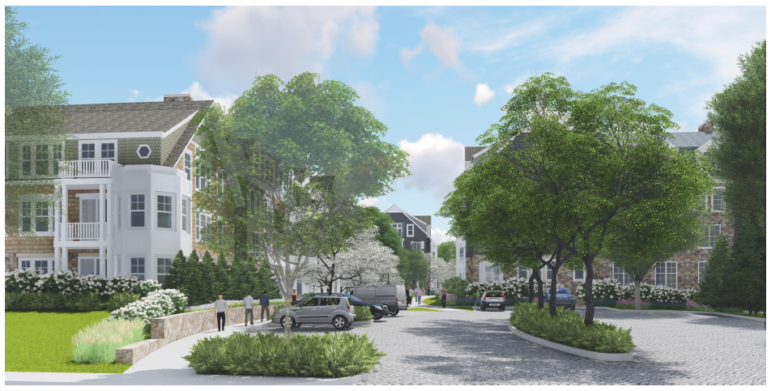 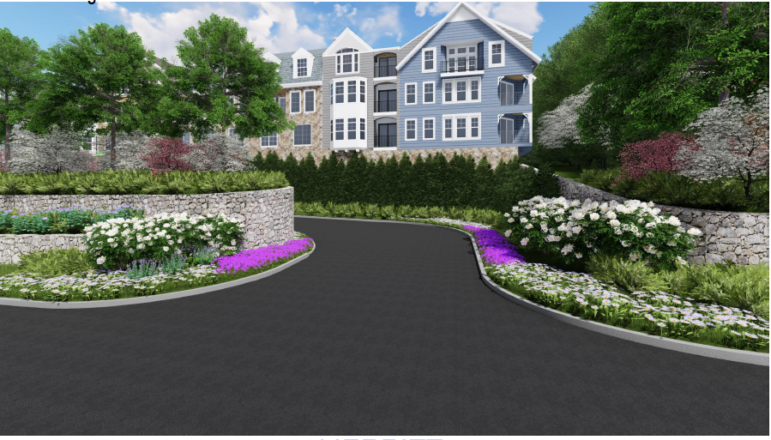 The owners of a 3.29-acre property on the edge of downtown New Canaan on Thursday night unveiled a scaled-back version of the proposed condominium-and-apartment complex that’s caused wide discussion in town since it was presented in June.

Instead of 123 units in four 4-floor multifamily dwellings, Merritt Village would have 116 units (55 condos, 61 apartments) and its townhouse-style buildings would rise no more than 3.5 stories, with some of the proposed structures coming down to two stories, according to representatives for the applicant, property owner M2 Partners.

The architects of the proposal would prefer to move forward with what originally had been submitted to the town, though the modified plan takes into consideration reasonable concerns raised by third-party consultants and neighbors, Dan Granniss of project designer SLAM Collaborative of Glastonbury told members of the Planning & Zoning Commission at a special meeting.

Though M2 Partners does not expect to garner “100 percent consensus,” still “we want to come to a reasonable consensus and we believe the modified design has done just that,” Granniss said during the meeting, which drew more than 100 attendees to Town Hall.

The modified proposal was made public during the fourth hearing on Merritt Village, currently the site of Merritt Apartments, a 38-unit complex.

P&Z since it received the application has called for reviews by third-party consultants in areas that include traffic, real estate valuation and neighborhood impact.

While those experts have presented their findings, many neighbors have questioned the studies’ conclusions in speaking out against the project—citing especially the “loom factor” of the originally proposed four stories, as well as fears of increased traffic, schoolchildren flooding public schools and the potential that introducing so much additional housing would decrease home values throughout the town. In some cases, those opposed to the Merritt Village proposal have said the project threatens to alter the character of New Canaan.

Meanwhile, advocates for the project have said it would meet a pressing need for in-town housing that serves seniors and accomplishes many of the goals of New Canaan’s Plan of Conservation & Development, sending prospective customers and diners into downtown businesses while presenting new options for living in proximity to the village center and train station. Advocates also note that Merritt Village would expand an underserved rental market in New Canaan while putting parking underground and providing for increased green space and mid-block pedestrian access.

Many of the same arguments came before P&Z during the hearing, with some new ones.

New Canaan’s Joe Rucci, of the Darien-based Rucci Law Group, said he represented St. Aloysius Church and that his priority was the “public health, safety and welfare” of the church, school and students. Rucci said he also was “very troubled with arriving here tonight and seeing what is, in effect, a new application.”

“I had no idea this was coming, no opportunity to look at the data, and now the commission seems to feel it has a gun to its head,” Rucci said.

He added that P&Z if it chose to, it could treat the modified plan as an entirely new application and “start the clock again.”

Tom Butterworth noted that he lives with his wife in New Canaan’s oldest home, a 1724-built antique on Carter Street, and that they would not be able to “trundle in” such a home forever.

The couple would “want facilities to live in just like the ones that are being proposed now.”

Though he had not studied the modified plan, Butterworth said he “does not see a problem.”

“I support, on balance, the proposal and I have no ties with the developer or project,” he said.

Ultimately, P&Z continued the matter to its regular meeting, scheduled for 7 p.m. Tuesday at Town Hall. The town statutorily could take another week or so prior to making a decision on the application, Town Planner Steve Kleppin said.

Commissioners asked the applicant’s representatives whether the modified plan still includes a sidewalk along the western side of Park Street (it allows for room to create it, yes, though it makes more sense to ensure the sidewalk can continue past the Merritt property), whether it’s possible to put in a crosswalk on Park Street near the Richmond Hill intersection if no sidewalk extension is installed there (that’s up to the town though mid-block crossing is not ideal), how much closer to Park Street would the shorter building be (it would be about 38 feet from the street compared to 43 feet under the original plan), whether modified plans call for buildings in two cases that are slightly larger than originally submitted (yes in terms of overall volume, and one of them is located somewhat closer to Park Street), where will the new “property line” between condos and apartments go if the complex is built as now suggested (how the land is separated when it comes to condominiums is contained in a separate agreement, though the space between condos and apartments is open green space), how many aboveground parking spaces would be eliminated in the building closest to Park Street under the modified plan (all of them), whether planned handicapped spaces complied with ADA regulations (yes, both state and federal requirements, in terms of location, number, grading and size of spaces), whether emergency equipment could get into the parking garage (there are sprinklers planned for the garage and it’s been reviewed by the New Canaan fire marshal), what is the height of the garage ceiling (no shorter than 12 feet, taller in some areas), whether there are any changes planned for the screening under the modified plan (no, though there’s room for more landscaping where parking has been eliminated), what people would use private “roof decks” for (grilling if allowed, and sitting in the sun), what is the square footage of those decks (don’t know—they’re not fully designed) and whether solar panels had been considered for the roof (no they haven’t been considered).

They also asked how many school-age kids currently reside in Merritt Apartments (10 to 12), how the modified plan for condominiums and apartments would break down with specific units (in the 55 condos, one 1-bedroom, 46 2-bedroom and eight 3-bedroom; in the 61 apartments, 18 1-bedroom, 41 2-bedroom and two 3-bedroom).

“The town is great, but those who say it is perfect and should not be changed, with all respect, are shortsighted,” Finn told P&Z.

“Thus, while there is a claim or allegation that the project is too dense, the fact is it appears to us to be directly to the contrary,” he said.

Finn added: “We are not here tonight to argue that the project is perfect, but we do strongly believe that it is a good project and New Canaan is far better off with it than without it.”

He addressed the proposed underground parking plan. Noting that SLAM took direction from the consultants brought on by P&Z, Granniss said that the total number of spaces would rise from 203 to 212, while the percentage of spaces designated as “tandem parking” would come down from 59 to 54 percent, and the number of spaces per unit goes from 1.65 to 1.83.

“I feel like this is moving the needle in a positive direction with respect to concerns raised for tandem parking,” Granniss said.

Michael Galante, a traffic consultant with Frederick P. Clark Associates of Fairfield, addressed questions and concerns raised by an expert brought in by the town.

Galante noted that several of those at the standing-room-only meeting had chuckled when it was said in opening remarks on the applicant’s behalf that Merritt Village would not negatively impact traffic. He clarified that his findings do not conclude that there will be zero impact on traffic overall, but rather that the changes to traffic volume and flow are allowable within New Canaan’s own guidelines for traffic impact.

“We have an ‘insignificant’ impact, if you want to use that word,” Galante said.

Chairman Goodwin asked for the applicant’s assumptions regarding the ages of those expected to live at Merritt Village.

Granniss said that New Canaan is undergoing a nationwide trend where it needs more senior housing.

“We see a need for empty-nesters but we also see a need for young professionals—that may be part of the ‘workforce housing,’ ” he said, referring to a part of the Merritt Village proposal that seeks to set aside some eight or so smaller rental units at below-market rates.

“What you have in New Canaan are a lot of wonderful and large homes that, over time, have become inappropriate for the marketing needs that New Canaan has,” Granniss said. “A project like this is vital to meet those needs.”

Goodwin also called for clarification regarding the ownership and future stewardship of the so-called “Maple Street Cemetery”—a burial ground that dates to 1825. M2 Partners has said that the site can be divided into three sections, and that the one it owns has no bodies (it is to be preserved as open green space in any case).

The question of title “has to be solved,” Goodwin said.

“It is of historical significance,” he said.

P&Z in the end called for the applicant to collaborate with the town attorney and New Canaan Historical Society, and to supply to the town attorney proof of clear title and any information regarding physical local of those interred there.

“I strongly recommend that there is some sort of resolution before Tuesday, or some sort of guidance,” Goodwin said.