Dr. Nicholas and Ashley Rutigliano moved to New Canaan last summer from Manhattan’s Upper West Side. A Brooklyn native whose wife hailed from Stamford, Rutigliano said the couple had been pregnant—their daughter Emilia is now nine months old—and began “thinking of where to set our roots.” 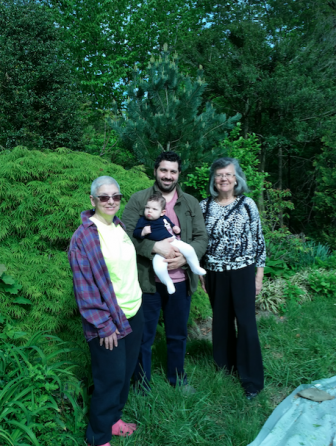 They found an apt home on Millport Avenue.

The Cape Cod-style house at number 156 had been owned since 1973 by Bruce Pauley, a fourth-generation New Canaanite and owner of the still-active Pauley Tree & Lawn Care Inc. who had stepped down the prior summer as town tree warden. Pauley and his wife Elaine—together with ‘Deputy Tree Warden’ Bheema, his ever-present and handsome young German shepherd dog—set their eyes on retiring to 33 acres in Vermont, and the Rutiglianos closed on the Millport Avenue house last June.

The owner of SANO Physical Therapy & Wellness, providing services to patients in their own homes, Nicholas Rutigliano had come to know the Pauleys through purchasing their home and understood on moving in that they’d “taken care of and nurtured” their property to a high degree. 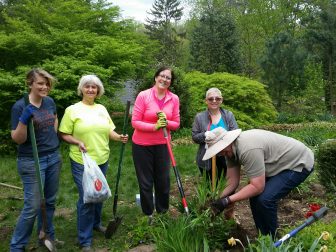 “It was a labor of love for them so I decided not to throw everything out and discard it,” Rutigliano said of numerous and varied Pauley flowers and plants on the quarter-acre property. “I wanted to give back something that is naturalistic and holistic.”

He phoned nature centers and schools in New Canaan as well as Darien, Greenwich and Stamford to see if they’d accept the plantings out back of the home. Finally, he connected with the venerable, 1939-founded New Canaan Beautification League.

“They called back, said they’d love to come by and take a look, that they would be interested,” Rutigliano. 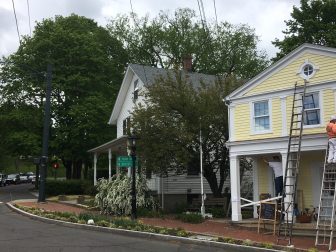 The plants that line the curb and sidewalk in front of the freshly painted Thrift Shop at Main and Locust in downtown New Canaan are donations from Dr. Nick Rutigliano to the New Canaan Beautification League, which handled the re-planting from the Pauleys’ home on Millport Avenue. Credit: Michael Dinan

League Co-President Faith Kerchoff said there were “easily” more than 150 plants to be had.

Thanks to Rutigliano and the Beautification League—with an assist from the town—those plants now adorn traffic triangles and streetscapes throughout New Canaan, as well as the organization’s Lee Garden (now in bloom) on Chichester Road, Kerchoff said. 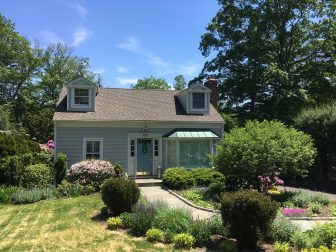 156 Millport Ave. in New Canaan. Dr. Nick and Ashely Rutigliano are maintaining the Pauleys’ plantings in the front and alongside the house. Credit: Michael Dinan

At the triangle in front the Thrift Shop at Main and Locust, the Beautification League re-planted sun-loving dianthus, daisies, liriope, Hakone grass, carex grass and evening primrose. Many of the shade plants are now at the Lee Garden, Kerchoff said, there’s lady’s mantle at the Center School bell pocket park at South and Maple, and there are three large grasses at Route 123-and-Carter, Country-Club-and-123 and Rosebrook-and-Brushy-Ridge.

“We were very grateful when Dr. Nick called us in early April,” Kerchoff told NewCanaanite.com. “He wants to learn about plants that are in his yard, he still has the front and sides to care for, all planted by Elaine and Bruce Pauley.”

The doctor’s generosity has given the league a chance to cross two projects it had of its list—the Thrift Shop triangle and train station driveway.

“The town crew, led by [Department of Public Works Highway Chief] Mose Saccary, were so helpful in preparing the ground at the train station for us,” she said. “It’s a win-win for everyone involved, a community effort for the New Canaan Beautification League.”

4 thoughts on “‘A Win-Win for Everyone Involved’: With Generosity and Care, a Plant-Loving Legacy Endures in New Canaan”