Town officials last week approved the installation of new guiderails along a road in northwestern New Canaan in the area of a recent car crash. 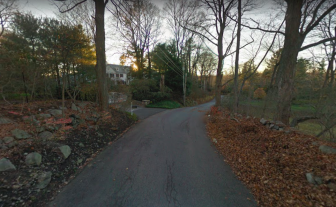 Cascade Road in New Canaan near the Stamford line. Streetview

When officials investigated the site of the Cascade Road crash, they found “a severe drop-off,” Public Works Director Tiger Mann told the Board of Selectmen at their April 5 meeting, held at Town Hall and via videoconference.

“The only thing that stopped the car from going over the edge was one boulder and a fence line,” Mann said.

The guiderail will hug a curb on a downhill run on Cascade toward Stamford, he said.

First Selectman Kevin Moynihan and Selectmen Kathleen Corbet and Nick Williams voted 3-0 in favor of an approximately $40,000 contract with Atlas Companies LLC to do the work.

In the same vote, the selectmen approved an approximately $25,000 contract with Atlas to replace guiderails on the eastern side of Lapham Road, near a heavily used entrance to Waveny Park trails, with an eye on doing the other side of the road in the future.

“These rails are nearing the end of their useful life,” Mann said.

The town has allocated $50,000 per year for the DPW’s guiderail program, and additional funds needed for the two projects will come from the department’s road paving budget, which is an allowable expense, he said.