Ann Badger Fuller, a devoted and adored wife, mother, grandmother and great-grandmother, died with a granddaughter by her side on December 22nd, a month shy of her 90th birthday.  She lived a full, wonderful life and was notable for her graciousness, kindness, humor and intelligence. 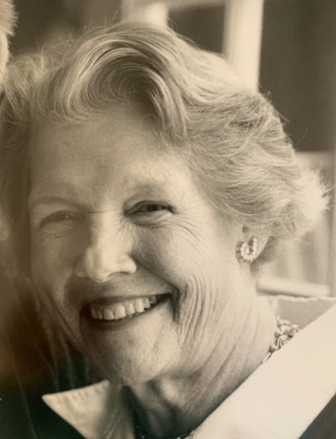 Ann was born and raised in Portsmouth New Hampshire in 1932, the younger daughter of Paul Combs Badger and Marian Abbie Mansfield Badger.  She was a descendant of such New England notables as Giles Badger, Tristram Coffin and Edward Doty.

In Boston after graduation, Ann met and married Alan Clarke Fuller (Pete) in 1955 while Pete was a student at Harvard Business School. Upon his graduation, they moved to Stamford, Connecticut for one year and then to New Canaan where she lived for the past 65 years.

A gifted singer and pianist, Ann performed as soloist numerous times at St. Mark’s church, performed in talent shows in the area and sang in both the Church choir and the Fairfield County Chorale.

St. Mark’s Church of New Canaan was Ann’s spiritual home. She attended services faithfully, and was the longest serving choir member, having sung there for more than 60 years.  She served on the vestry, was a member of the St. Aubrey’s Guild, and was vice-chairman of the search committee for a new rector.  She was a member of the search committee for a new organist/choirmaster, a member of the Circle of Concern, a member of the Every-Member-Canvas, and the Prayer Circle. She was also president of the Episcopal Women’s Group and was a delegate to the Diocesan Convention.  She distinguished herself by serving as the first female Senior Warden in the history of the Church. During her leadership, a new house was built on the church campus and a new Rector was called.

Ann was a devoted philanthropist, volunteering hours at the Junior League, the New Canaan Sewing Group, the New Canaan Garden Club and Meals on Wheels of New Canaan. She was the longest serving volunteer at Waveny Care Center where she played piano accompaniment for the Wednesday non-denominational service for more than 35 years.

Ann was a member of the Country Club of New Canaan, the Norwalk Yacht Club, The Corinthians Association, the Darien Power Squadron and the New Canaan Field Club.

Reference: The Alan and Ann Fuller Endowment Fund for Music.

You may use the following link:  https://onrealm.org/stmarks/give/memorial

One thought on “Ann Badger Fuller, 89”