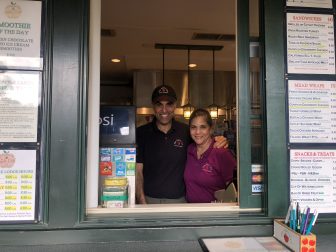 The business started out with some small local catering gigs alongside operations at The Lake Club and The Field Club, according to co-owners Emad Aziz and Marianne Perry. When the opportunity arose to bid operating out of the Mead Park building 12 years ago, they seized it, and have been making their house specialty, the falafel wrap, with a signature “mom-and-pop” style ever since.

“I believe there’s big value in business done old-fashioned way,” Aziz said. “We’re not getting caught up in all of the Uber Eats trend.” 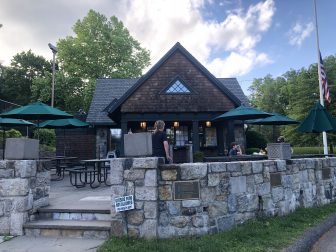 The pair did not even realize their company had reached the 20-year milestone until they went to local business Nurenu to develop a new logo.

“The company was asking Marianne how long ago we started,” Aziz recalled. “We knew it was somewhere in the 17- or 18-year ballpark, but it was a complete coincidence that we chose to design our new logo on exactly our 20th anniversary.”

The Apple Cart’s traditional ways seem to be working out—Aziz said that each year the business is busier than the last, something he never expected.“It’s amazing when you see the generations,” Aziz said. “It’s unbelievable to see  the kids grow every year.” 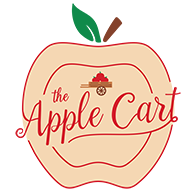 Perry said she largely credits Emad for the success.

“Emad has a big personality, he’s very personable, so our clients really love to talk to him,” Perry said.

Apple Cart’s success is especially notable due to the difficult nature of the industry, Perry said.

“This is a very particular type of business, it’s not a restaurant,” she said.

But to Aziz, that’s part of the appeal.

“We have inventory trucks coming in every day because we just never know how much we’re going to serve,” he said. “But I love people, and I love food. The uncertainty keeps you on your toes.”

The business plans to stick around in Fairfield County, and just recently signed a contract with Newfield Swim and Tennis Club in Stamford.

“Our original plan was to expand the operation and take on more summer locations,” Aziz said. “But we don’t want to spread ourselves too thin, where our quality and our service become compromised.”

He added: “As long as people are happy with us and the town is happy with us, we look forward to serving in this location for many, many years to come.”