Arusha the Chow Chow—an ancient Chinese dog described as typically “reserved and discerning with strangers,” according to the AKC—is an unusual example of the breed, and a terrific dog to profile for this feature, New Canine-ites.

That’s because for her entire 3.5 years, she’s gone to work with owner Shawn Webb, store manager at Ten Thousand Villages. 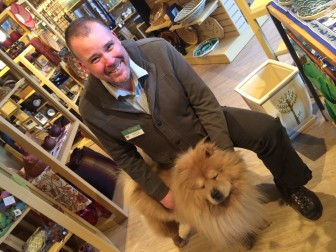 “She’s been hyper-socialized since she was a puppy,” Webb said on a recent afternoon from the shop—open since November on the corner of East Avenue and Main Street—as Arusha relaxed at his side.

“Both my prior job and here, she went to work with me every day, so she would meet 10 to 20 new people every day,” Webb said. “Most Chow Chows are not that way and are only loyal to their owner, and not really outwardly friendly. She’s extremely friendly.” 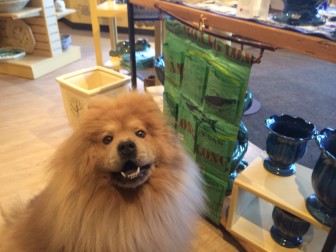 “Her original owner was Albanian,” said Webb, who has had Arusha since she was a puppy. “I’ve been dog sitting for three years now.”

A Norwalk resident (and Cranbury Park regular) who has explored New Canaan at least as far as the dog run at Waveny, Arusha is also unusual in this: She has her own Facebook page, with 198 followers.

What can people expect to find there?

“Any activity she is up to,” Webb told NewCanaanite.com. “She has a boyfriend, Bronson. He is a Boykin Spaniel owned by Bill and Amy Hall of Kaiser-Battistone Plumbing and Heating.”

Asked what Arusha eats, Webb replied: “Her food is all hand-cooked. She does not like commercial dog food. She will not eat it for more than one can. So I wound up making ground beef—whatever ground meat is on sale, basically—with a dehydrated mix from Dr. Harvey’s that adds in other nutrients that she needs.”

One thought on “Arusha the Chow Chow: Has a Boyfriend, Facebook Page”