[Editor’s Note: Town resident and re-enactor George Baker will appear as John Adams at New Canaan Library at 6:30 p.m. on March 25 to present “My Wife, Abigail Adams, the First Modern American Woman.” The videos interspersed throughout this article—shot Friday, March 14—offer a glimpse of Baker’s special talent, as he channels Adams in question-and-answer format, placing the second president in 18th (and early 19th) Century New Canaan and discussing our town, library, commuting and the upcoming show.]

Though he was just two or three years old that day, New Canaan resident George Baker still recalls his very first encounter with a performing artist.

The memory is this: Baker and his father were walking through an open, outdoor area in New York City—something similar to Hyde Park in London—when the pair came upon a man surrounded by a crowd, singing.

“Everyone was listening and he was so good,” Baker recalled Friday afternoon from a table at Connecticut Muffin on Main Street, his favorite cup of coffee in town steaming in front of him (regular roast with plenty of milk). “People were singing along and I said, ‘Wow, that’s what I want to do.’ ”

It was a prophetic moment for the young boy, whose wish would materialize in ways that, in retrospect, surprise and delight Baker himself. 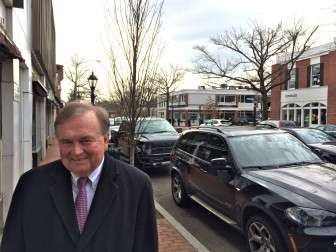 A lawyer out of Columbia University who practices employment law and litigation (with wide experience in condominium law), Baker has developed a highly tailor-able, professional one-man show re-enacting John Adams. In just over five years, it’s taken him from stages at Mystic Seaport to the Dwight D. Eisenhower Presidential Library and Museum in Abilene, Kan.

“He had so many facets to his personality—plus, I’m a liberal Democrat and being a liberal Democrat, you are always looking for how things should be changed, not how thing should be preserved—and he was that way,” Baker said. “He was always looking to restructure things. And he had this way of looking at everything, and his wife [Abigail], too, where they were just generations ahead of time on things like slavery, education, and the idea of America. They saw it before everybody else, and then they were very persuasive.”

Baker was born and raised in Stamford, and graduated Stamford Catholic High School—today Trinity Catholic—in 1965. He entered Columbia University and, after earning his undergraduate degree, stayed on for law school at the New York City school. There, while working toward a law degree he’d earn in 1973, Baker’s abiding interest in theater began to flower.

“I always thought I should be able to have a presence when I spoke as an attorney, and theater is one of the best ways to get you to do that,” Baker said.

He participated in theater while launching his career in law, and married his wife Susan in 1981. The couple moved up to New Canaan two years later with their six-month-old daughter, Jane, and Baker began immersing himself in the arts community here, among other local organizations.

He took on several leading roles as an actor with the Town Players of New Canaan as well as troupes out of Greenwich and Westport. (Baker also is a singer and pianist, which we’ll get into below.)

Though Baker enjoyed the shows, to abandon at the end of a show’s run a role he’d worked hard to develop felt abrupt—particularly when there was far more exploring to do within the part, he said.

So now all Baker had to do was find a character for his one-man show.

He explored the idea of Winston Churchill, accent and all, until he realized that all of the former prime minister’s work was copyrighted.

The couple visited John Adams’ birthplace in Braintree, Mass., and Baker started reading whatever he could find on the statesman.

“I did nothing but read everything about Adams for two months and I said, ‘I love this guy.’ ”

Baker’s early attempts to write a one-man show centered on Adams failed to take advantage of a gift for comedy writing that the lawyer already had shown in other parts of his theater-related life, he said.

He’d helped write—and perform—annual shows for the Gridiron Club, of which he was a member, and those shows were funy.

He first tried out the new, lighter Adams material on a Rotary Club in Fall River, Mass. Baker, a member of the Rotary Club of New Canaan, had phoned at least 50 such clubs in Connecticut, Massachusetts and Rhode Island hoping to land a gig.

“So anyway, I do it,” he said. “And the people are going crazy. They go crazy. All my lines are working. And the song—they’re in tears. The song is great. And not only that, there’s a woman in the audience, she says, ‘I want you for my group.’ ”

And she paid him.

“I go home and my wife is ready to pick me up off the floor and I’m floating,” he recalled with a smile. “I’m floating.”

Over time, Baker has developed a unique ability to apply the breadth of Adams’ own interests to the organizations for which he re-enacts (for a taste of that, see the videos in this article). Baker leverages his own, wide knowledge of the facts of Adams’ life and the times in which the great man lived, in order to speak to his audience’s interests.

“This guy had so many facets, in this period and that period, that I can just turn around and when someone hires me to give a speech, I can go and find some specific area of John Adams’ career that involves that issue they care most about,” Baker said. “It’s just, John Adams is all over the place.”

And now he’ll be here in town, with the March 25 library show—performing one block from his office of 20 years at Hawthorne, Ackerly & Dorrance LLC.

“They just love it that I am John Adams,” a smiling Baker said of his colleagues at the firm. “They just think it’s the greatest gas.”

For his part, Baker is a patron of the arts locally and also has been involved in civic activities in New Canaan.

He served for 15 years on the board at the Carriage Barn Arts Center and for 14 years on the Town Council—counting among his triumphs, together with Chris Hussey, the preservation of New Canaan’s ambulance service as a free entity to those who avail themselves of it. His kids—Jane and Thomas—came up through the public schools (South-Saxe-NCHS) and both went on to Dartmouth. 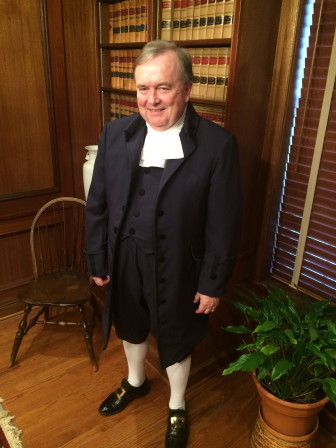 With his singing voice and piano, he plays some of his own favorite music—such as George Gershwin and Cole Porter—for elderly residents at Waveny Care Center.

He also has played at the New Canaan Chamber of Commerce-led “Pop-Up Park” in the summer, and serves currently on the board of the Lyme Art Association and participates annually in the Connecticut Storytelling Festival & Conference at Connecticut College.

“I’ve always done a lot of these things,” Baker said. “And I’m having a ball.”