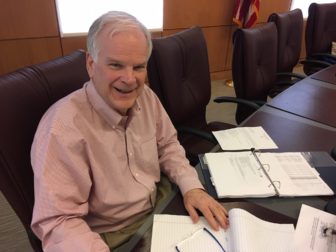 According to a letter from Parrett that he cited during the meeting, Audit Committee members “understand from Rob Mallozzi that he is considering changes to the Finance Department and that effective immediately, the town’s administrative officer and CPA, Tom Stadler, will be given the responsibility of overseeing the Finance Department.”

The statement continued: “Tom has the experience and holds a CPA. He is the ideal source to review the efficiency and effectiveness of [the] town’s finance organization and to make appropriate changes, improvements and modifications to rectify the immediate deficiencies and provide for a long-term solution.”

It isn’t clear what role current Finance Director Dawn Norton would play, if any, in a reconstituted finance department. Reached by NewCanaanite.com, Mallozzi declined to comment on specifics, citing matters of personnel.

The change comes after the Audit Committee noted existing “material weaknesses” in New Canaan’s financial systems that had gone unresolved and led the group to withhold support for the town’s annual financial report for the year ending June 30, 2016. It also comes days after the town’s treasurer, Andrew Brooks, told members of the Town Council during their regular meeting that he had three major concerns with processes that revolve around New Canaan’s finance department.

Brooks attended the Audit Committee meeting and provided more details regarding his concerns (more on them below), though before he did so, Mallozzi clarified some of the language that the treasurer had used with the Town Council.

Specifically, Mallozzi noted that “there is no investigation” with respect to the handling of town funds or accounts.

“I want to make that clear,” Mallozzi said.

Joined at the meeting by fellow Audit Committee members Chuck Jacobson and John Lanaway, Parrett corroborated the statement regarding “investigations,” and part of his letter reads: “It should be clearly stated that none of us are aware of any misappropriations of town assets at this time.” (Norton did not attend the meeting.)

In addressing Brooks, who provided details about the process of getting out two town-issued checks that had raised red flags for him, Parrett clarified: “I just want to be clear because we have press here, that it doesn’t minimize the importance of a breakdown in the check area, but both of the checks were ultimately for amounts and to vendors that were appropriate. The process was incorrect and the process should not have broken down and a broken process can sometimes create problems, but in this particular case it wasn’t a problem of money missing or not being paid to people.”

Reiterating and providing more details on what he had told the Town Council, Brooks—who as treasurer, has his signature on all town-issued checks, and following a rule established by Mallozzi himself, gives manual approval of any check in an amount over $250,000—said he had three major concerns:

Parrett in his letter referred to “serious shortcomings in the check signing processes, and potentially the maintenance of appropriate controls over the bank accounts themselves … possibly rising to the level of material weaknesses.”

He noted in the letter that the change in the town’s Finance Department “does not impact the Board of Education finance organization, as it has remedied all significant control deficiencies promptly to the full satisfaction of the external auditors.”

“Based on this understanding with the first selectman and the resulting expectation of permanent solutions, the [Audit Committee] would support adoption by the Town Council of the financial statements of the Town of New Canaan for the year ended June 30, 2016,” the letter said.

Parrett said during the meeting that the committee would take up Brooks’s concerns and assign them to internal or external auditors, for a report in 30 to 60 days.

“Nothing particularly important about 30 or 60 days other than we want to get these things fixed that are before us, and also starting out fiscal year with a totally clean slate in every system area,” Parrett said.