Like all other town-owned buildings, the disused brick structure at 64 Richmond Hill Road—slated for demolition in 2010 and described as a “garage” by some, “barn” by others—is getting a fresh evaluation now by an appointed volunteer group. 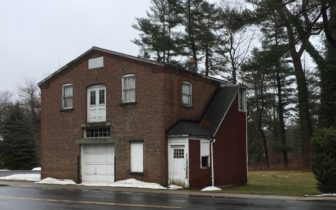 The brick structure at 64 Richmond Hill Road is being evaluated by a newly formed committee of volunteers. Credit: Michael Dinan

The Town Building Evaluation and Use Committee in September is to report back to the town on the conditions, uses and capital needs of the 44-plus structures that New Canaan owns (except for the public schools). The group is expected to make recommendations to the town about how buildings may be used differently, or whether New Canaan should continue to own them at all.

In their meeting Monday, members discussed the possibility that the Richmond Hill Garage, located at the northern edge of Mead Park, roughly opposite Grove Street, could be restored for some useful purpose.

It’s an empty space that, “with a decent amount of money, could be put into useful condition,” committee member Ben Bilus said during the meeting, held in Town Hall.

Hypothetically, Bilus said, the ca. 1901-built garage’s 1,600 square feet of space could provide swing space for municipal departments as the need arises or “could be provided to people for some kind of good use—say, for example, the Food Pantry when it needs a place to go.”

That could require an investment of some $200,000 to ensure no one is exposed to the garage’s lead paint, he said.

Committee members have been assigned various buildings to visit in teams and gather up information and data to take back to the full group. Bilus said that the cost of demolishing the garage—estimated several years ago to be upwards of $130,000, given a requirement to handle and dispose carefully its asbestos—would come to roughly the same amount as restoring it.

“Nobody is saying run out and tell the Food Pantry to move there, but it’s the kind of thing you can think about or maybe people from Vine Cottage when they are displaced, even if it’s only temporary, you might have a building that could be come the town ‘utility fielder,’ so there’s something worth discussing there.”

Led by New Canaan’s buildings superintendent, Bill Oestmann, the committee spent the majority of the meeting discussing a proposal to acquire software that would give officials a powerful, informative and dynamic way to track a building’s capital investment needs.

Amy Murphy Carroll urged fellow committee member to stay away for now from “one-off” discussions of the buildings they’re studying.

“We have a lot of buildings that are vacant and are not being used, and other reports have said the best thing to do is to take them down,” Carroll said. “We should all think about this stuff— but also get the information first on how it is used and what is used.”

Committee member Penny Young said the Richmond Hill garage was “a perfect example” of what faces the group.

“Get all your preconceived ideas about how you use these buildings out of your head and let it go wild and crazy,” Young said.

Carroll said what’s driving the committee’s work is “that there is a sense that we have a lot of buildings in this town.”

“We don’t necessarily know how they are used or if they are used to max capacity or if they have excess capacity. And we have very few things that can make an impact on the town budget, because so much of what we do is people, and people are salaries. This is where we can make a rational, well-informed impact.”

In 2010, residents of New Canaan were deeply divided as to what to do with the Richmond Hill garage. Those advocating for its razing said it’s demolition would improve aesthetics and clear room for more open space at Mead Park. Preservationists organized under the banner ‘Friends of Mead Park Brick Barn,’ had it listed on the state Register of Historic Places and urged the town to find a new use for it.

Here’s a history from New Canaan’s Mimi Findlay, a founder of the New Canaan Preservation Alliance:

“On September 15, 1901 Benjamin Mead of New Canaan and James Mead of Greenwich sold a lot, 60’ wide by 100’ deep, along Richmond Hill Road near the intersection of Grove Street to The Standard Oil Company of New York for $300. There the company built a brick barn, with four stalls for two teams of horses, a stall for grain and a stall for tack room, with a center passageway for a kerosene delivery wagon, with a hayloft above. Standard Oil shipped kerosene from its refineries by rail car to bulk stations from where horse-drawn tank wagons distributed it to grocery stores, general stores, drug stores and hardware stores, where it was sold to the consumer. These tank wagons also delivered to large farms, estates, and industrial or commercial sites . After World War I the deliveries were usually made with a gas powered truck and the carriage barn became known as a garage, the hay-loft converted to upstairs offices or a meeting room, and to reach these upstairs rooms an outside staircase was added.”