Saying they need to understand the building’s long-term purpose first and whether it could be passably restored (and legally occupied) for less money, members of New Canaan’s legislative body on Wednesday night unanimously rejected a proposal to renovate Vine Cottage for $550,000. 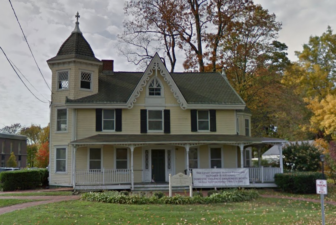 The Town Council voted 10-0 against the bond issuance during its regular meeting.

Councilman Christa Kenin said that though she appreciates the work that Architectural Preservation Studio, DPC put into a more comprehensive plan for the ca. 1860-built gabled structure, “I was a little surprised to see it on the agenda as a request for a bond.”

“It is a sweet house that needs a lot of work,” Kenin said, yet she’s a member of a recently appointed committee that’s been charged with making recommendations about town-owned buildings “and this is one of buildings that is at the top of our list to evaluate.”

“And I think even approving—whether it’s $550,000 or to come back to $100,000 before it falls to the ground—makes the assumption that we are going to hold onto this building, which may or may not be the case six months from now when we study the 44-plus buildings that the town is responsible for,” she said at the meeting, held in Town Hall.

Ultimately, the Town Council charged New Canaan’s buildings superintendent with figuring out what would be the least costly project at Vine Cottage to make it inhabitable—by the town’s Human Services Department, its current occupant—for the next several months, until the Town Building Evaluation and Use Committee comes forward with a recommendation on what to do.

According to town resident Carl Rothbart, a partner working out of the Architectural Preservation Studio’s New Canaan office, Vine Cottage’s needs are wide-ranging and include: peeling paint with moisture trapped behind it, some shingles are cracked and deteriorating, replacement windows don’t fit their openings, shutters must be restored and screen and storm windows are deteriorating.

“It has been a critical building in town for many years,” Rothbart said. “It’s in a very important location and is one of the key elements in the town, but over the years it has sort of suffered from some damage.”

Perhaps most of all, Rothbart said, Vine Cottage is out of ADA compliance. Under his proposal, the “north porch” (facing Main Street) would be rebuilt and not provide ADA access and a new ADA ramp would be installed to provide access to the new south porch, which most everyone uses to access the building.

Yet Rothbart and town officials appear to be at odds on just what would be required to bring Vine Cottage up to code with respect to ADA.

Citing advice he said he got from New Canaan’s chief building official, councilman Joe Paladino said the ramp out front needs only “minor repairs” to make it ADA-compliant.

“He [the chief building official] also indicated that we either needed to replace or repair the handrails and also add a service bell so that anybody who comes to the front of that property will notify the staff inside that there are guests,” Paladino said. “He said that would satisfy ADA.”

“If we were just doing minor repairs, then yes we could just do some small items—extend handrails and make sure the slope is proper and you have a level landing,” he said. “But when it came time to realize you had to rebuild the porch anyway and that the majority of people enter that building from the south side, it made sense—and the south porch is in even worse condition—to reroute the accessibility to what is really the main entrance to the building from everyone who uses it.”

Ross said a subcommittee of the Town Council that’s been studying Vine Cottage, “looking to minimize the amount of bonding for this project,” studied “the absolutely necessary items and what is required by code” and came up with a list.

Young cautioned that if the $550,000 project is rejected, the town must understand whether “there are some significant liabilities from the town standpoint, say with the condition of the porch.”

“Then I think that perhaps is a focus area for you [the Department of Public Works] to come back to us pretty immediately and say, ‘This is something that needs to be done right away,’ whether or not building stays in use category of the town because that will not happen. The committee report is not due till September, so there is an interim there.”