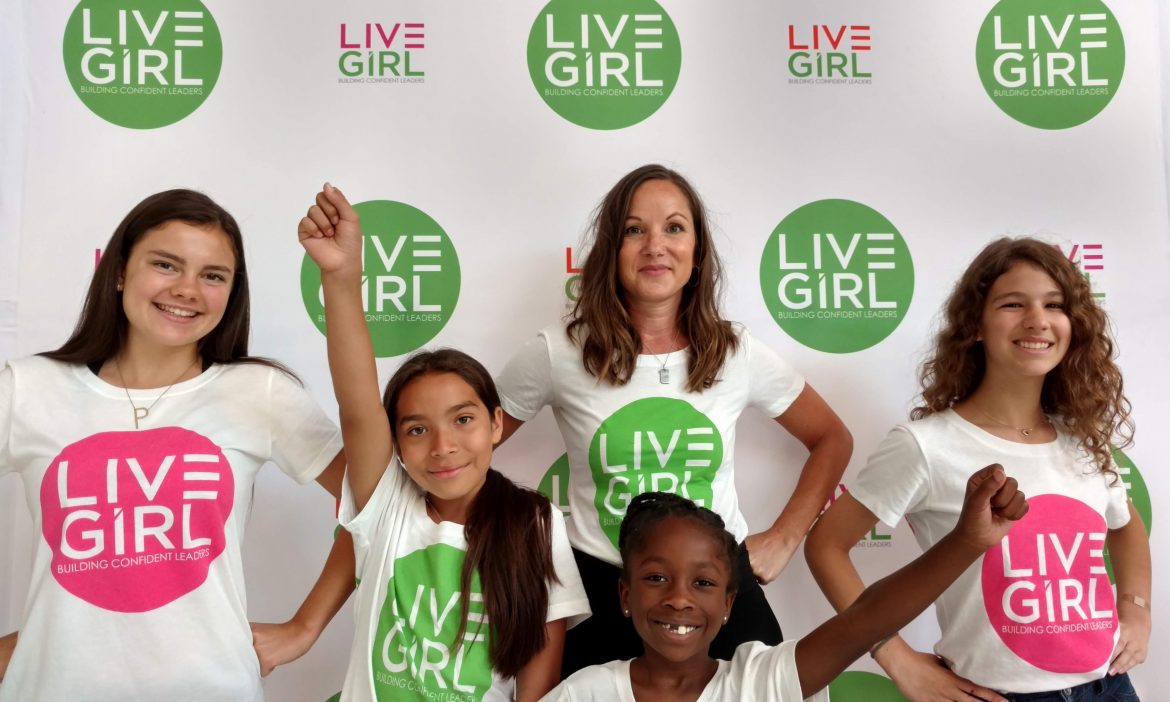 Lola Duhov, 11, has participated in workshops and camps hosted by a New Canaan nonprofit organization for more than one year.

The Stamford resident, a Scofield Magnet Middle School student, said that prior to getting involved with LiveGirl, she had been “a very not self-appreciative person and I’d always put myself down and thought I was never good enough.”

“So my mom signed me up for [LiveGirl] and I became so connected with it and in sync with everyone and it just made me feel like a better person, and I’ve learned to accept myself more and become a much more positive person,” Duhov said Wednesday from outside the New Canaan High School cafeteria, filled with laughing girls, all cheering and working together at a leadership workshop.

Duhov is one of dozens of area girls who have benefitted from LiveGirl since New Canaan’s Sheri West founded the organization five years ago.

Pronounced ‘Liv Girl’ with a short ‘i’—it’s named after West’s daughter Olivia—the organization’s goal “is to build confident leaders,” according to West.

“Everything we do is to build self-esteem and social and emotional intelligence, which are the building blocks of a confident leader,” West said. “To surround girls with a positive community and give them access to fierce female role models and mentors so they know what’s possible, and to close the female leadership gap.”

Camp LiveGirl, a week-long summer camp that brings girls together from across Connecticut for team-building and leadership development, is an anchor of a program that runs year-round and includes diverse programming. The camp runs through Friday.

“It’s so hard to walk into a room and feel change happening but this is the one place where I feel that,” she said.

Kurth’s favorite parts of camp are the “amazing keynote speakers” who attend each year, she said.

“I’ve met so many people, from politicians, to race car drivers, to Olympic swimmers to amazing authors, and after every inspired female that I’ve listened to I feel so empowered and confident and ready to take on any challenge,” she said.

Asked how she felt on reaching the five-year milestone, West said “thrilled.”

“We’re working so hard to reach every girl who needs us, but it’s an important time to take a step back and look at how far we’ve come,” she said.

West said that when LiveGirl started five years ago, it ran a single mentoring group in Norwalk. This year, the free-of-charge portion of its programs will reach 1,500 girls across the state. LiveGirl also recently announced a partnership with the Connecticut Alliance of Boys & Girls Clubs. By the end of the year, its middle school program, The Confidence Club, will be at every Boys & Girls Club in Connecticut, she said.

West, who has a background in leadership development, said that despite her successful corporate career, she had, “like most women, also encountered obstacles and setbacks unique for women.” She said that she founded LiveGirl “to pay it forward, and help prepare the next generation of female leaders.”

Lillie Gray, a NCHS student and first-time camp counselor, said she loves “how everyone’s so involved in bringing the camp together.”

“There’s so much teamwork but we’re all still growing individually at the same time,” she said.

Duhov said the environment at Camp LiveGirl is “absolutely amazing, filled with so many powerful girls and women and counsellors.”

“It’s just made me feel like I’m at home with other girls who need help like me sometimes,” she said.